In some proteins (such as 4ZXB, 6CE9 which are respectively apo and halo forms of insulin receptors), I see ligands such as FUC (ALPHA-L-FUCOSE) and NAG(N-Acetylglucosamine). No matter which paper I checked I see no explanation for these ligands and therefore I assume they have to do with the experimental procedure but I do not quite understand what is their role. Do they stabilize a particular state of the protein? Note that the proteins above are determined by different methods the first one X-ray crystallography and the second by electron microscopy. I have no technical knowledge about the neither method so any input or link to a paper that actually explains them would be appreciated.

proteins xray-crystallography
Share
Improve this question
asked May 22 '18 at 16:45

The insulin receptor is a glycoprotein. This is discussed, albeit briefly, in both papers for the structures you mentioned and the glycosylation is visible in the structures themselves. You can get more info in the following paper, among others:

This addresses the general case, rather than the particular case of the insulin receptor, which is answered by @canadianer.

The General Problem of unexpected ligands in PDB structures

In preparing a relation database of about 400 protein structures I encountered the problem of distinguishing ligands that were substrates or cofactors of the enzyme from those that were not. And, believe me, the latter were widespread (and a real pain). In some cases it was obvious that the ‘ligand’ was the buffer (often MES) in which the protein was dissolved or ions such as sulphate. In the case of sugars, I assumed that the latter were present to aid crystalization. That view seems to be supported — in some cases at least — by a review by McPherson and Gavira. In a list of eight categories of additives that are used in protein crystallization they include:

(v) Osmolytes, co-solvents and cosmotropes are compounds that exert their effects at relatively high concentrations, 1 M or more, and include a wide range of molecules such as sucrose, trehalose and other sugars, proline, TMAO, glycine, betaine, taurine, sarcosine and a host of others. The effect of their inclusion in the mother liquor is to stabilize (or destabilize) the native conformation of the protein by altering the interaction of the surface of the protein with water, or by altering the hydration layer and possibly the structured waters.

As an example I cite the seven molecules of glycerol in 1B6G (shown below), a haloalkane dehalogenase from the bacterium, Xanthobacter autotrophicus. Although certain, usually pathogenic, bacteria do have glycosylation pathways, there is no suggestion that this is the case here, as indicated by the nature of the triose and the fact that the crystallization was performed in a glycerol solution: 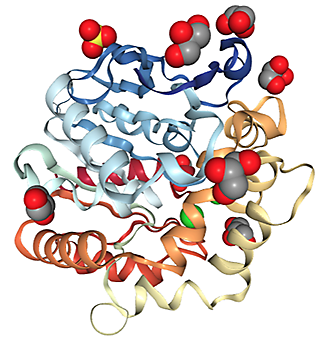 Haloalkane dehalogenase, 1B6G. The glycerol molecules (grey and red) are shown in space-filling mode. (The yellow and red molecule is sulphate, the green one a chloride ion.)

Not the answer you're looking for? Browse other questions tagged proteins xray-crystallography or ask your own question.

3
Why are genes expressed as proteins rather than other types of bio-molecules?
1
How to parse SCOP parseable files PDB residue identifiers?
5
Protein structures given in PDB and SNP's
1
How can I compare the STRIDE and DSSP output files of a particular pdb file?
0
Counting the number of hydrogen bonds of multiple PDB files
3
Do residue sequence numbers in PDB files correspond to the positions in the backbone?
4
Subset of Protein Crystal Structures (from PDB)
1
How many different chains exist within a specific pdb file?