Could somebody explain in simplest terms the difference between inverse agonist and neutral antagonist?

Which one is more well natural and less likely to cause pathways to rebound?

Does neutral mean less effect such that stepping from an inverse agonist to neutral is the best idea to avoid withdrawal?

Edit: I am trying to determine how quickly the pathways rebound when stopped during withdrawal. I would assume this might vary between inverse agonist and neutral antagonist. I am not asking about actual withdrawal symptoms.

Many receptors have a natural constitutive, or "baseline", amount of response that they generate, they're not just an on-off switch. At baseline, many receptors will generate a partial response, which means that certain things binding to them can either increase or decrease their response.

A neutral antagonist is one that causes no change in the signaling response of the thing that it's binding to. It simply stays the same. Note that this can still be important, because a neutral antagonist can block the binding of other agonists, ones that would have generated a change in response, even if the antagonist itself doesn't cause a response.

See this graph from this wikipedia page for a good explanation: 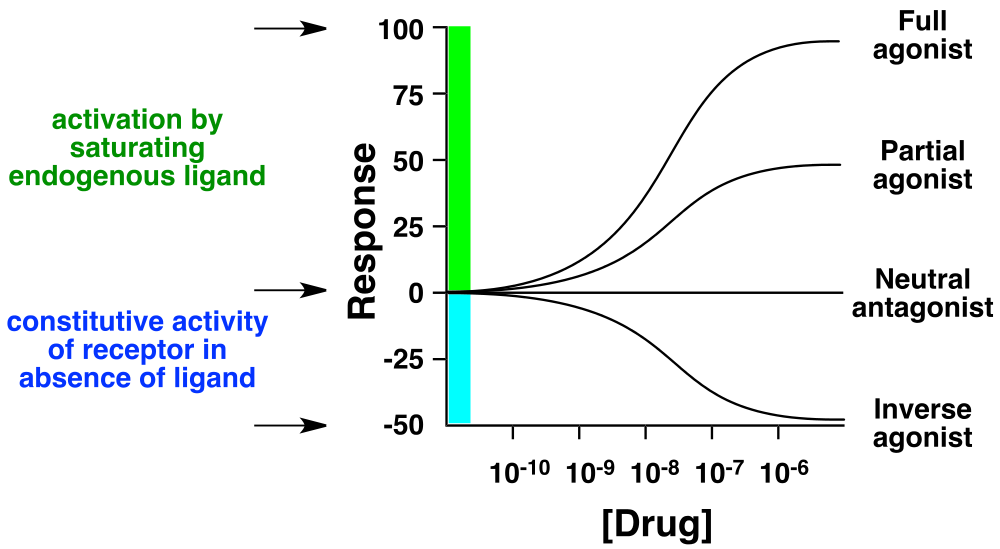 1
Inverse of dopamine reuptake inhibitor?
4
Why is dopamine or a dopamine-receptor agonist not pumped into the brain of Parkinson patients?
2
How do neurons inverse an action potential?
1
Is APB an antagonist of the mGluR6 receptor?
3
İrreversible dopamine antagonist vs. Dopamine agonist
6
What structural features make a molecule a potent opioid receptor agonist?