Are Somatotropin and Somatotrophin hormones the same? It's confusing because when you type in Somatotrophin in google, it says, "a growth hormone secreted by the anterior pituitary gland.", but there's no Wikipedia about it. But when you type in Somatotropin, there's whole Wikipedia for this stating that it's a growth hormone. I am 100 % sure that there is a difference between these two terms: tropin and trophin because Wikipedia itself says not to be confused with these terms and has articles separately for these two terms. So, Can anyone help me be clear about these two terms?

They are the same thing, and both are old-fashioned terms for what is now termed specifically growth hormone (i.e. not generically as in "a growth hormone"). It is clear from the Wikipedia entry for growth hormone that this is equivalent to somatotropin.

I could not find a specific scientific reference that states that the two are the same, but I present a line of reasoning based on a search for mention of the terms in books using the Google ngram. 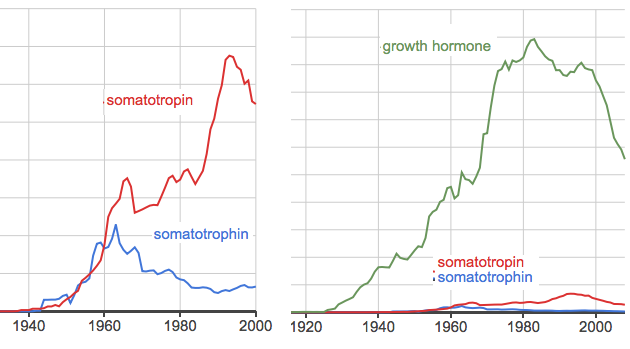 The initial similarity in the curves in the left-hand frame reflects, I think the competing use of the terms when the hormone activity was first discovered. Eventually somatotropin won, although the use of growth hormone is much more common now (right-hand frame).

If you look at the books cited by the ngram in which somatotrophin is used, you will find that many are in the field of animal science, especially dairy science in relation to the lactogenic effect of the hormone. Years ago I worked in this area, and remember that growth hormone had such lactogenic effects. Presumably somatotrophin stuck in this area, whereas somatotropin was more generally used, especially in human endocrinology.

I am hesitant to quote non-scientific dictionaries on scientific topics, but in this case it is probably justified, and it also addresses the difference in meaning of ‘tropin’ and ‘trophin’, referred to in the question.

The Merriam-Webster online definition of somatotrophin redirects to:

Chambers on-line only has somatotrophin, But my own 1994 printed edition has:

My Chambers Dictionary iPhone app also has both.

And Saunders Comprehensive Veterinary Dictionary, 3rd ed. (2007), according to a citation in the Free Medical Dictionary, has:

If you check the meanings of the two suffixes in Merriam-Webster:

-trophic
of, relating to, or characterized by (such) nutrition

-tropic
1 : turning, changing, or tending to turn or change in a (specified) manner or in response to a (specified) stimulus
2 : attracted to or acting upon (something specified)

It seems probable, therefore, that the original form was somatotrophin, but, either by confusion with the second definition of -tropic or a North American chemical aversion to ‘ph’ (as in sulphur/sulfur), somatotropin became dominant, except in the field of animal science. Perhaps that is why the Oxford Dictionary, both online and in my printed edition of 1991, ignores somatotropin completely. However you would have difficulty ordering somatotrophin from the chemical supplier, Sigma-Aldrich/Merck, whereas somatotropin is available.

Not the answer you're looking for? Browse other questions tagged terminology endocrinology nomenclature or ask your own question.

9
Which human body hormonal systems exhibit 24 hour diurnal cyclical activity?
2
Pituitary giants - is the fusing of growth plates dependent on amount of growth hormone in blood?
8
What is the distinction between the terms detrivores, decomposers, saprotrophs and saprozoic organisms?
13
Using anatomical terms for human organs and parts of plants
6
How different are these terms: Phylloclade, Phyllode, Cladophyll and Cladode?
2
What are the (correct) terms for these flagella-arrangements?
2
What is the difference between a cytokine, a hormone and a protein hormone?
2
What's the difference between releasing hormones and tropic hormones?