It is known that large animals have lower heart rates (beats per minute) than small animals. Is it the same situation in humans?

That is: if we have a group women, about the same age and fitness, and if we record for each women her body size (relevant indicators of body size are height, weight, BMI, body surface area) and her heart rate, will we see a trend that the heart rate decreases as size increases?

References to paper and studies about this issue are also welcomed.

The paper you link finds that there is not a significant correlation between body mass and resting heart rate in humans. While there is a well known negative correlation across mammals: 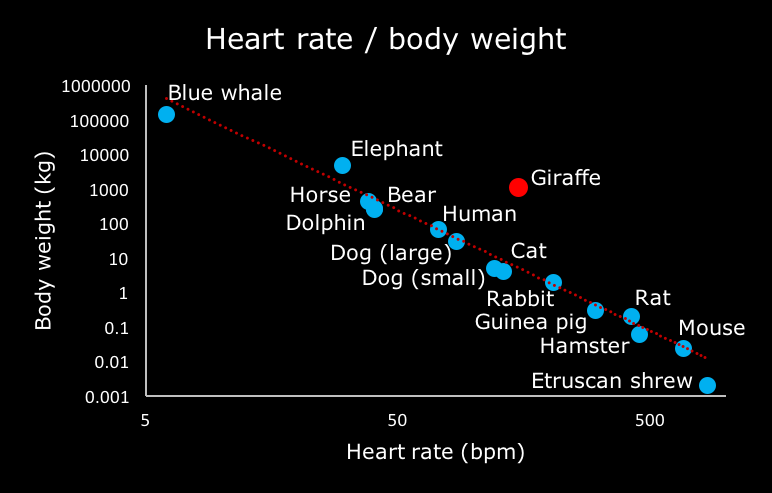 This is the ever-popular mouse-to-elephant curve that is found in one form or another for lots of physiological measurements.

I'll suggest, but have no evidence, that the lack of a significant correlation in humans is simply a result of there not being enough range in body mass among humans to allow finding a significant result. When the range of one variable is small, the association between that and another variable necessarily lessens. For example:

Although the linear relationship between the two variables is largely similar, when the range of x is truncated, the coefficient of determination, $R^2$, decreases. The correlation goes from 0.97 to 0.7. In this case, that might still be "significant", but I suspect that in humans that variation is much greater in resting heart rate.

It would have been nice if that paper included the actual data on HR, but they act like it doesn't exist just because it was not significant.

Not the answer you're looking for? Browse other questions tagged cardiology heart-output or ask your own question.

4
What is the correct medical procedure(s) for taking a resting heart rate?
6
Why does max heart rate decrease with age?
4
What is the ratio of breathing rate to heart rate?
3
How does heart beat faster while doing a strenuous task?
0
What's the amount of blood passing through heart every second at Max Heart Rate?