Wild bee hive indoors - can I move it?

Wild bees decided to build their hive in my shed, right above the table where I work on occasion. 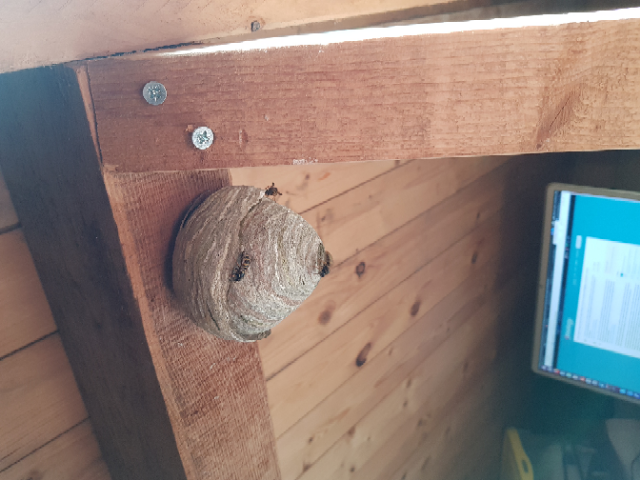 The image is rotated 90 degrees left.

It started out as a single bee from what I could see two weeks ago. I thought fine, we won't bother each other and I like the company. But now two weeks later the bees are busily constructing and it is quickly growing larger. It started with a smallish dome, and new layers are being added from the outside. Every now and then a drop of some fluid falls out of the hive, and also small black grains, perhaps bee poop? Any ideas what these are?

Anyway, I have no idea how big this hive will become, so it is is probably a good idea to move it (it is around 15 inches from my head ;-)). Any suggestions?

Those aren't bees, they're a kind of paper wasp. As you observed, they start small and seem innocuous at first, but be warned, as the nests grow in size, the inhabitants become more protective of their nest and are more likely to see you as a threat to attack than as a peaceful cohabitant (at least this has been my experience.)

Nest construction starts in late spring and continues throughout the summer. The last brood raised includes males and next year’s queens. Due to the importance of these reproductives, the worker wasps become very protective and aggressive toward those who venture too close to the nest this time of year.

Somehow we seemed to have a number of attractive habitats for paper wasps (and mud wasps) and had to deal with them when too large or in a dangerous place (e.g. in a door frame.). A honeybee relocation service will do you no good in this situation.

You have a few options to consider, I recommend sooner than later. First, at night and while wearing protective clothing and gloves, you can simply whack the nest off at the base and run away as quickly as possible); Plan/clear your escape route in advance! Stay away for a couple of days as it often takes this long for them to completely abandon the young inside. If these are bald-faced hornets, their sting is quite painful, much more so than a bee or a yellow-jacket.

Or, if this doesn't bother you (it does bother me), you can light the nest with a burning roll of paper (it is, after all, paper, and will burn quite rapidly. The 'good' part of this is that the flame usually destroys the wasps' wings as well, and they're less likely to be able to attack you. This is best done on a cool night after all or most activity around the nest has ceased. The fire flares brightly and burns the nest very quickly without setting fire to adjacent structures, but a fire extinguisher should be kept nearby just in case.

Third, you can buy a spray, but I found them to be ineffective against the kind of paper nest shown in your picture, because the envelope protects the wasps inside. I used up two large cans of foaming spray (in spite of hating insecticides, as it wasn't a spot I could safely whack) without any obvious result. I ended up doing multiple whack-and-runs.

Finally, you can hire a professional, something I never did in my 28-odd years of dealing with them, but which is often recommended.

9
Bee (?) identification
11
How long can a bee surive in a jar?
6
Bee identification
3
Is it one queen bee per hive or per colony?
5
Can you identify this bee?
5
What made this small light weight bee hive-like structure?
4
Bee Identification, Rochester NY
9
What kind of bee can dig through stone?