Chromosomes are of different size but why do all chromosomes have similar GC percentage?

When I browsed NCBI I saw a pattern: even if the chromosome sizes, number of genes, and number of proteins are different, GC% in chromosomes tend to be similar. The examples are linked below.

If you see Mitochondria genome it is not very similar to chromosome. Why all chromosomes tend adjust their GC% near to the average of total GC% Is there a specific reason related to metaphase of meosis?

to further clarify I have some images to help 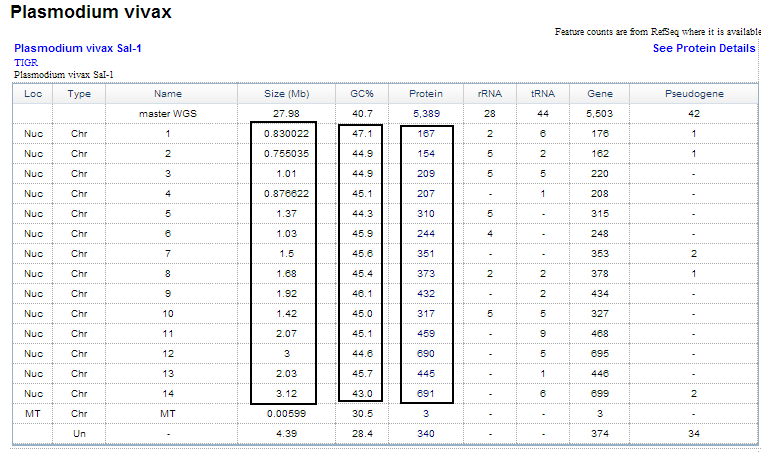 The chromosome size or genes in an organism are not adjusting near the average of their total but GC% does. It has only 3-2% (falciparum) or 3-4% (vivax) variation in GC%. It feel like its balancing like equalizer. Why?

As @dd3 points out, average GC% indicates a need for stability and coding regions or structural regions of the genome may need to be more stable. But the largest %GC in genomes are found in thermophiles - organisms which live in high temperature water - in hotsprings and undersea geothermal vents. This review mentions how some thermophiles can be found with 50% GC. The extreme thermophile Thermus thermophilus can have a GC% content of 69.4%.

But you are asking how does GC content get averaged out over the length of a large genome. The answer is variation and selection. When a gene needs to be more stable because of genomic function or because its trying to live in a hotter environment mutations that convert A/T to G/C base pairs will convey an incremental advantage to survival and will tend to be retained in the gene pool as long as no greater disadvantage to the mutation results. Over time and as the stability creates a greater advantage, GC % will migrate further and further away from the mean.

This works for both thermo-tolerance and because of the biofunctional constraints of being a telomere, centromere or a coding region - stability and coding constraints play against each other to converge on an optimal GC content in any given stretch of the genome.

Conversely most genomes have a GC content below 50% are migrating there because too much stability can have a cost as well. Breaking up the DNA helix for transcription and other cellular processes must go smoothly as well for example.

Coding regions are significant for bacteria (E coli is 89% coding sequence). For coding sequences, the genetic code is logically 50% GC on the average, but if you look at the actual codons in the diagram below you will see that except in the case of a single codon case (tryptophan, methionine) the third base always has a GC option, allowing for a GC content in the mid 60 percentiles. The constraint of allowing coding sequences to freely vary is only an approximation - in some cases substitutions to amino acids with GC rich codons might move the cieling up a bit. And the more frequent amino acids have the possibility of making 2 or 3 bases of their codon GC bases. Overall it would be remarkable to find a bacteria with GC% greater than 72%. Mutations and the requirements of proteins being coded for would simply not allow it. 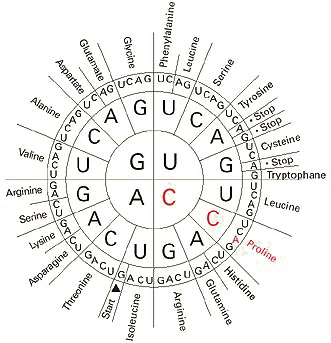 So: over evolutionary periods these GC mutations accumulate where they are helpful, even to the extent of 2/3 of the genome being GC pairs. The strongest selective force to accumulate a high average GC% for a genome is exposure of the genome itself to a high temperature environment.

Note that this thermo-stability argument doesn't count for many animals because they do regulate their body temperatures.

There is significant variation in genomic GC content, both between species and within an individual genome. An average GC content in the range of 35%-45% is common, although there are definitely organisms that fall outside this range. The plasmodium species you link to above is an example of extreme AT richness (low GC content), whereas some bacterial genomes have as much as 70% GC content or more.

For eukaryotic genomes, nucleotide composition is not uniformly distributed. Just because a genome has an average GC content of 40% does not mean you can select any 10kb region in the genome and expect that region to have +/-40% GC content. Rather, eukaryotic genomes are a mosaic of large regions which internally have a very uniform composition, but whose composition is quite different from flanking regions (isochores).

So although all the chromosomes of a particular organism may have similar average GC content, realize this is just an average and that nucleotide composition varies significantly throughout the genome.

Good answer from Daniel. I'd also add that there can be significant differences between chromosomal or nuclear DNA GC content and that of extra-chromosomal entities like mitochondrial and chloroplast genomes or (naturally occurring) plasmids. These DNAs have different constraints on them (replication, sub-cellular location, eg) and that may be reflected to some degree by a GC content different than that of the nuclear chromosomes.

However, I recognize that this is all very speculative. Does anyone have better ideas?

Not the answer you're looking for? Browse other questions tagged genetics chromosome genomes or ask your own question.

15
Evolutionarily speaking, why do humans have 46 chromosomes
0
Would two species of yeast with similar genome sizes have the same number of genes or chromosomes?
6
Are all chromosomes equally susceptible to mutation?
3
Why do genes with closely related functions often reside on different chromosomes?
12
Why does size decrease across the sequence of human chromosomes?
2
Why do two different E. coli reference genomes have different lengths?
4
Chromosome naming convention: Why are there chromosomes named “1” and “1A”?