Secondary structure and function in mRNA and single-stranded virus RNA

Although some mRNAs and the RNA of single-stranded RNA viruses do have some secondary structure, this is much less than in rRNA, tRNA etc.

Why is this so? What prevents their folding to the extent of the RNAs mentioned?

And surely mRNA cannot have very much secondary structure. It enters the ribosome in a linear fashion, so if it bound to itself, wouldn’t that stop translation?

Evidence for Secondary Structure in mRNA and viral RNAs

Work in the late 1960s and early 1970s on the translation of the polycistronic single-stranded virus RNAs (MS2, R17,Qβ etc.) provided evidence for their secondary structure. The extent of masking of the ribosome binding sites (Shine and Dalgarno regions) of different cistrons affected their translation, and treatments and mutations that destroyed the secondary structure stimulated translation. This 1980 paper by Iserentant and Fiers and this 1982 paper by Hall et al. provide entries to that literature.

Eukaryotic mRNAs do not normally have ribosome binding sites, although those of certain RNA viruses like polio do, and these have distinctive secondary structure (ribosome landing pad) — see e.g. this paper from Sonenberg’s group. However the majority of eukaryotic mRNAs have extensive secondary structure at their 5'-ends, which requires a specific helicase — initiation factor eIF4A — in conjunction with eIF4B and eIF4H to unwind — see e.g. Svitkin et al., RNA (2001).

A little reflection is enough to convince oneself that the extent of self-folding of a single-stranded RNA depends on its nucleotide sequence. The extent of hydrogen bonding of, for example, an (AG)n polymer (A does not base-pair with G in a Watson–Crick helix) would be expected to be much less than that of an (AU)n polymer where A–U base pairing can occur. Likewise, continuous stretches of complementary bases are likely to result in extra stabilization by base stacking, and hence in a more stable secondary structure than the same number of interspersed base pairs. The fact that the secondary structure of a mRNA can be altered by changing the nucleotide sequence without changing the amino acid sequence of the protein product is illustrated by the algorithm described in this paper by Gaspar et al., Nucleic Acids Research, (2013).

It has already been mentioned that proteins (eIF4A and other initiation factors) are involved in unwinding eukaryotic mRNA, and there are numerous examples of the interaction of proteins with specific nucleic acid structures (including the ribosomal landing pad (aka internal ribosome entry site — IRES), previously mentioned above and shown below). 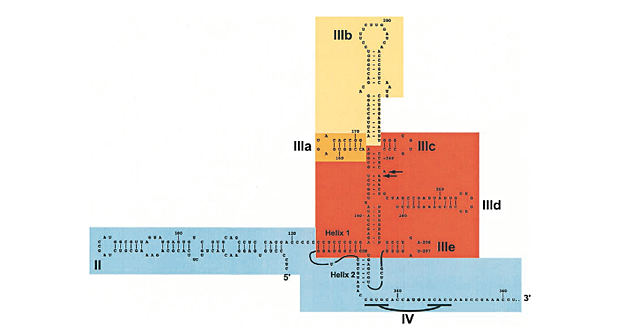 [IRES for Hepatitis C virus RNA, showing areas of interaction with various proteins. From Hellen and Sarnow, Genes and Development (2001)]

Turning to viruses, tobacco mosaic virus (TMV) — a positive single-stranded RNA virus — was the first virus the structure of which was determined by X-ray crystallography. There is, therefore, a wealth of detail as to the organization of RNA and protein in its virion — this PDB ‘Molecule of the Month’ article (illustrated below with the RNA in red) is quite accessible (in both senses). (A schematic of the virion of a different virus — vesicular stomatitis virus — VSV — is also shown.)

Not the answer you're looking for? Browse other questions tagged rna mrna retrovirus or ask your own question.

8
How does a single-stranded RNA bind to a double-stranded DNA to form a “triplex structure”?
2
RNA secondary structure comparison
9
How many RNA-binding proteins can simultaneously bind on a single mRNA?
7
Use cases of RNA secondary structure prediction
10
Are non-coding RNAs introns?
3
To what extent is the genetic code more than just a code?
3
Which mRNAs enter P-bodies?
1
Double stranded RNA Single stranded DNA