Why is pepsin able to operate at low pH?

Pepsin is a protease that operates in the acid pH of the stomach. Many proteins are denatured at low pH, and most enzymes — whether or not they denature — require a higher pH for activity.

Why is pepsin not denatured at low pH, and has catalytic activity at low pH, but not at higher pH?

The aspects of this question relating to the effect of pH on enzyme activity have been dealt with previously on SE Biology questions and answers:

Their relevance to the situatio of pepsin can be summarized:

The catalytic mechanisms of other proteases (serine proteases and cysteine proteases) do not involve ionization changes in aspartic acid, which is why they operate at higher pHs.

A good question. As you have accurately described, pepsin is indeed a protein, more specifically, a protease enzyme - a catalyst which assists the break-down of protein at certain amino-acid markers such as tryptophan and phenylalanine. As you are likely aware, proteins are composed from approximately 20 amino-acids, as shown below. 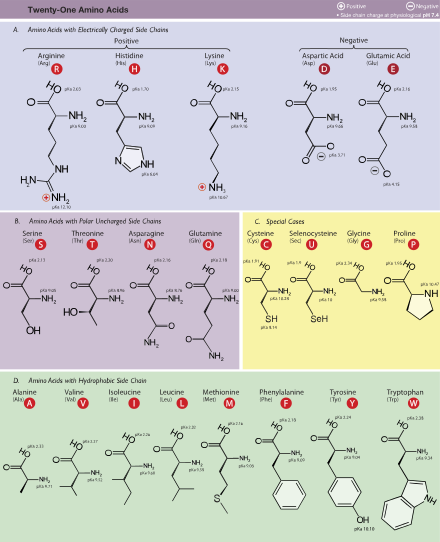 However, the chemical properties of a protein are constituted by its folding - its three-dimensional shape. This answer describes some superficial differences between protein families and the mechanism and function whereby pepsin is capable of functioning at a low pH. 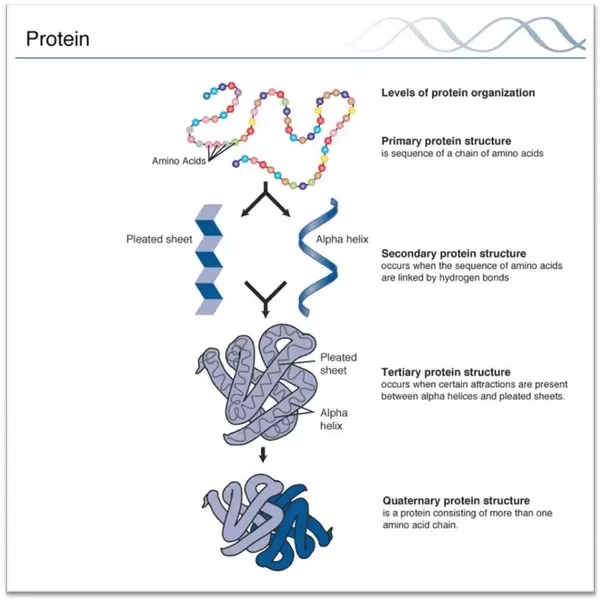 Disregarding any post-translational modifications - the alterations made to a protein following translation from mRNA - proteins are made from a determined sequence of amino-acids, named its primary structure. Different classes of proteins shall have a different sequence and proportion of various amino-acids. For example, collagen fibrils are composed from a greater proportion of the amino-acids glycine-proline-hydroxyproline.

A sample of pepsin extracted from a pig (Porcine pepsin) demonstrated a higher yield of asparagine.

Secondary structure - the inter-molecular bonding between amino-acid side-chains including hydrogen-bonding and disulfide bridge. As you correctly described a protein denaturing, it is these bonds which are broken, thereby altering the protein's shape.

Although there be four principal protein structures - primary, secondary, tertiary and quaternary - the first two are most critical to understanding the ability for pepsin to withstand low pH. Pepsin is originally secreted into the stomach as a proenzyme - an inactive precursor to an enzyme - called pepsinogen. When food is ingested, both pepsinogen and hydrochloric acid are released into the stomach. Returning to our primary structure, pepsinogen possesses 44 additional amino-acids compared with the active enzyme. During acidic conditions, the pepsinogen auto-catalyses its own cleavage from the additional strand, folding into the correct form.

Therefore, other proteins in high acidic conditions lose their unique three-dimensional structure due to the breaking of these inter-molecular bonds. In a sense, denaturing only specifies a transformation into an inactive protein but could be stated for pepsinogen which is 'denatured' into pepsin which attains its activity in this 'denatured' form.

For more information regarding pepsin, I would advise the following Wikipedia page as an initial resource: https://en.wikipedia.org/wiki/Pepsin For information regarding collagen and porcine-pepsin composition, the following sources respectively may help: https://www.ncbi.nlm.nih.gov/books/NBK21582/ and https://www.ncbi.nlm.nih.gov/pmc/articles/PMC427253/?page=2

I wish you good digestion!

Not the answer you're looking for? Browse other questions tagged proteins enzymes or ask your own question.

5
Why does pH have an effect on enzymes?
1
How can ionized amino acid form be important for the catalytic activity?

7
Why is it often the case that an enzyme is favorable only towards one direction of a reaction and not both directions?
2
Optimum pH of Catalase
2
How can you stabilize enzymes in pellets made from microcrystalline cellulose?
3
The effect of pH on catalase
7
Are there enzymes for every given reaction?
20
What inactivates pepsin in infants?
4
Betaine HCl stomach pH
2
Does digestion require hydrochloric acid?
1
Are there any small peptides with protease activity?