This quote from Miller (2004) makes it clear that the affinity of drugs for the H1 receptor does not correlate to sedation: 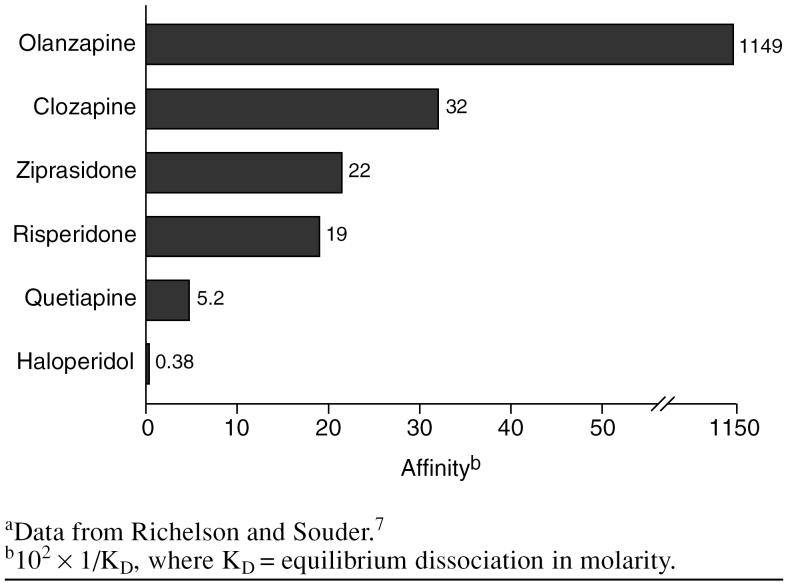 Is there a mathematical way to compare affinity to potency between different drugs?

There are a few important things to consider as you interpret these data.

When your linked review refers to potency, it is likely referring to the old concept of chlorpromazine equivalents. The table in the article cites Jibson and Tandon in a review in CNS news special report from 2001. This is not a standard peer reviewed article, and I can't access it, but it lists relative potency in mg, with chlorpromazine set at 100mg and haloperidol at 2mg: 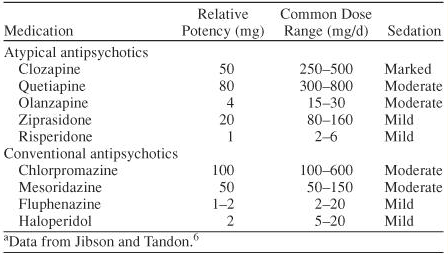 This is almost certainly chlorpromazine equivalents. You can read a discussion of the limitations of this understanding of antipsychotic potency here, but these numbers are not based on a mathematically rigorous pharmacodynamic analysis. They are not consistent, especially for atypical antipsychotics, and are estimated based on clinical data of the minimum effective dose among other methods.

So, where the affinity in this article, $\frac{1}{K_D}$, has a rigorous pharmacodynamic definition, potency does not. Here it is, effectively, shorthand for how much of a drug you have to administer in order to get a therapeutic effect.

To understand exactly what Miller means when he says:

For example, quetiapine, which has little affinity for the histamine H1 receptors, is a less potent antipsychotic medication and requires many more milligrams to be effective than do higher-potency medications such as risperidone and ziprasidone.

You need to understand that $H_1$ receptors do not mediate the primary clinical target. So the lower potency of quetiapine means you have to give more of it to have a clinical effect. Because of the higher typical dose of quetiapine, even though the affinity for $H_1$ receptors is relatively low, you're going to get more binding to $H_1$ than with, e.g., risperidone, which requires a lower dose.

Take a look at the chart in the Richelson and Souder article Miller cites to see the different receptor targets for these antipsychotic drugs. 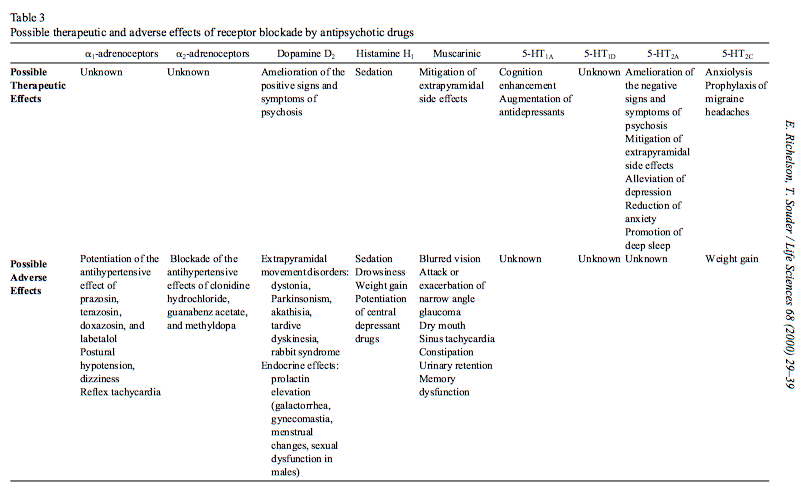 The primary therapeutic targets (used to characterize the general clinical potency) are (probably) the $D_2$, $5HT_{1A}$, and $5HT_{2A}$ receptors. The action at the $H_1$ receptor is primarily an adverse effect. Miller is trying to say that the sedation effect does depend on affinity at $H_1$, but you also have to consider the dose required to get an effect at $D_2$ and the relevant $5HT$ receptors.

There is a rigorous definition of potency for an agonist (and also of inhibition for an antagonist, and antipsychotic drugs are antagonists). Potency is both distinct from and dependent on affinity. I'd recommend Goodman and Gillman Chapter 3, if you'd like to learn more. It's not particularly relevant to understanding this article, in part because Miller doesn't use this definition of potency, and in part because the model involves a single ligand-receptor interaction that directly mediates a desired effect. It's based on the following equation, where $LR^*$ is an activated ligand-receptor: $L + R \rightleftharpoons LR \rightleftharpoons LR^*$. Because both desired and adverse effects of antipsychotics involve actions at many different receptors even beyond those in Richelson and Souder, the simple model falls short.

Not the answer you're looking for? Browse other questions tagged molecular-biology pharmacology or ask your own question.

3
Do SSRIs downregulate or upregulate the 5-HT3 receptor?
8
How does LCR compare to Assembly PCR
6
Selective Androgen Receptor Agonist
1
Dimethyltryptamine and Sigma 1-type opioid receptor interaction
6
The effect on the efficacy and potency of a non-competetive antagonist binding to the active site of the receptor (dose-response curve)
2
Is receptor antagonism just long-term binding?
0
What factors may lead to a difference in whole-cell potency compared to cell-free potency?
1
Same target receptor different mechanism of action?