How does this diagram illustrate carbon cycling in lakes?

Could someone please explain the following process to me: 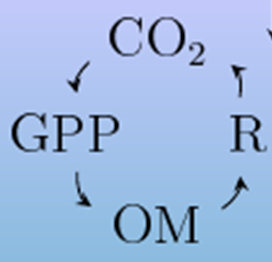 This process refers to carbon cycling in lakes and is described in the context of $CO_2$ flux from lakes into the atmosphere. GPP is gross primary production, $CO_2$ is carbon dioxide, R is respiration, and OM is organic matter. I realize that this question may be rather simplistic to some but my basic knowledge of any biological/ecological processes is rather limited. So, basically what I am asking is

This shows the major biological transformations of carbon in any system (not just lakes).

On the Left Side:

On the Right Side:

If the Left and Right sides are balanced, then there is no net change in the size of the $OM$ pool or the amount of $CO_2$ in the atmosphere. However, note that over relatively short time scales these can be very out of balance. Any time plants or algae are growing (i.e., gaining mass as $OM$) the Left Side > the Right Side or $GPP$ > $R$. Once those plants die, they accumulate in the system as dead $OM$. The decomposition of accumulated dead $OM$ by microbes will generally make the Right Side > Left Side or $R$ > $GPP$.

This picture from Wikicommons shows the same cycle in a more realistic setting.

Not the answer you're looking for? Browse other questions tagged photosynthesis respiration or ask your own question.

11
Does Sansevieria trifasciata really absorb Carbon Dioxide at night?
3
Where does all the carbon go?
1
Breathing's Role in Aerobic Respiration
4
Are the arrows in this diagram of ATP synthase correct?
8
How much oxygen does a plant use up at night?
0
How do plants take in only carbon dioxide?
2
What does this graph explain?
0
What does the difference between GPP - NPP represent?
2
Why does affinity of Hemoglobin increases for Oxygen in carbon monoxide poisoning?