Why are there not two trees of life?

Life on earth started an estimated 3.8 billion years ago, very soon (in geological time) after the earth’s surface cooled to become solid and the first oceans formed. Nowadays, we believe that all living things can trace their ancestors back through a multi-branched tree of life, to this first living thing.

How do we square this rapid appearance of life, with the fact that it only seems to have developed once? In other words, we didn’t have life starting up in 10 different places on earth, giving rise to 10 different trees of life, why did we see only one?

In a variation on Richard Dawkins’ Selfish Gene, is it possible to think about a Selfish Tree?

Once the first tree of life arrived, it set about changing the atmosphere and environment generally, multiplying the number and range of species to fill every available niche (eg cold, hot, land, river, ocean, acid, alkali, large, small) in order to leave no space or circumstance for a second tree of life to spring into being.

...all living things can trace their ancestors back through a multi-branched tree of life, to this first living thing.

I don't know exactly how anyone can claim that life arose on this planet only once. For all I (maybe 'we') know, it may have arisen a number of times, but only the most well-suited survived/adapted on this planet in its then-conditions long enough to begin a record of the type we now call the 'tree' of life (complex/eukaryotic organisms). You can't 'know' what you don't know. You can theorize, but you can't know.

Scientists make new discoveries all the time. There was a time (lasting millennia) when men of science* believed that life (in the form of a mud fish, for example) came from non-living matter (a mud puddle, in this case.) When that idea became laughable, the microscope was invented, and people still believed that microscopic life (bacteria, for example) arose from the proper conditions (a hay infusion, in this case.) It wasn't until Pasteur climbed the Alps with his experiment that spontaneous generation was finally put to rest.

At one point, we thought Homo sapiens were the only humans. We didn't know bacteria could live in the stomach, or in a lake full of arsenic.

How do we know what to look for when we talk of "life" if it's not life as we know it? We need to keep studying, keep thinking, keep our minds open about 'life' to find out more about it, like how many times it is likely to have arisen.

*I'd like to think that women of science knew better but were simply ignored.

While this problem can potentially be overcome by considering many genes, this becomes more difficult the further back in time you go, and impossible if you consider primitive life (such as an RNA world), about which we know very little. Assuming multiple origins of life, horizontal transfer of heritable information soon after their generation could be possible, as well as undetectable today. This creates a rather tangled tree, as visualized below: 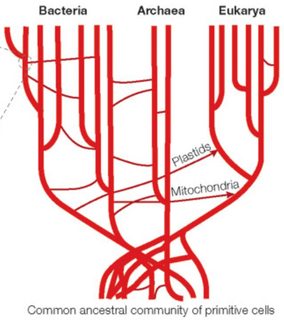 It is also possible that life originated multiple times on Earth, but only one "tree" survived to the present. In this scenario, there are multiple trees of life with many extinct and only one extant.

To sum up, the answer to your question is not known.

The emergence of life out of matter is a very rare event. The chance of having such event occurring more than once in a small time-frame is very little.

If the time-frame is large enough, then "New Life" could emerge again. However, in that case, the new emerging living organisms would be extremely disadvantaged by the presence of the "Old Life", already evolved to efficiently compete for energy sources etc.

Any new, barely functional, primordial life form cannot outperform the already existing ones, thus it would undergo extinction pretty soon. And that is why we ended up with a single tree of life on this planet.

Some links for further reading:

It is entirely possible it did arise multiple times and we are the results, one of the nicer aspects of nucleotides is they can combine, it is possible different independently derived gene lines combined in the early stages. In our best guesses about what the most primitive forms of life would be like it is fairly easy to combine them. We simply don't know enough about exactly how the earliest life was structures to say with any certainty one way or the other. it could even be yes and no with life that was not compatible with this cooperation being driven to extinction by the cooperating ones. But as others have pointed out the window for this to occur is small, once the first form of life evolved the ability to breakdown larger molecules for raw material newly evolved life would be doomed, as would earlier ancestors of this "predatory" line. Life would literally clean up the traces of its early origins.

It turns out to be a surprisingly tricky question. Even descriptive lists like the one on Wikipedia fall just a hair short of actually being a definition. Through the years life has been famously easy to intuit and understand, and famously hard to analyze and pin down. Whole branches of philosophy deal with that question.

This creates an uncomfortable challenge in answering questions like this one. It's possible to define "life" in such a way that, if we were to look into the past with a magical crystal ball, we might find existed "outside of our tree." I might then say "no, that's not how I define life," and pick some minor detail which exists in our tree but not in this "second tree" and add that to my definition. Because there's one one overarching agreed upon definition with clear crisp edges, there wont be one clear agreement.

What we can say about the past is that the observed facts regarding the origin of life are consistent with the theory that life sprang up once, and only once. That is intentionally shy of the wording you used. I, personally, have problems with science using phrases which overstep the bounds of what it can actually prove, so I prefer to use more restrictive phrasings when the going gets tough. For 99.9% of the time, "life originated once" is a sufficiently clear phrasing. For the 0.1%, like this question, it's nice to rely on more precise wording. (and I'm open to any suggestions on more precise wordings in the comments)

I will note that we do find things that occurred more than once in the evolutionary tree. It is currently believed that wings and flight evolved four separate times: insects, birds, bats, and pterosaurs. To use the more precise phrasing, the observations in the fossil and genetic records are consistent with the hypothesis that they evolved four times, and rather contradictory with the hypothesis that they evolved just once.

That's not to say that's direct evidence in relation to your question, but I think it does point out the fact that scientists do indeed look for something happening more than once. It would be an interesting result for them. To date, nobody has been able to make a solid argument to show that life did indeed evolve twice. Thus, a "second tree of life" gets relegated to the same dusty corner as Russel's Teapot.

If we look for life based solely on characteristics we've observed from the tree of life, then we will only find life forms connected to that tree. What I mean is, our current understanding of life revolves around cell theory, therefore whenever scientists go out to look for new life, they look for characteristics related to the cell.

May be another life form or tree exists that isn't derived from the cell. Food for thought.

Not the answer you're looking for? Browse other questions tagged evolution life or ask your own question.

3
Is the missing “life-ingredient” in today's Earth's existence the reason why we cannot recreate life?
0
Is there already discovered non-carbon form of life?
25
Why did abiogenesis only happen once?
63
Why does evolution not make our life longer?
2
Is there any definition of life which makes viruses undeterminable?
10
Why don't we see life form again and over again?
5
Are specialized cells considered to have life?