If life began at sea, why organisms are less salty than the sea?

We may take it for granted that a fish, a seaweed, or clams are not too salty to eat, although the sea around them is salty. I know about the existence of a mechanism which prevents their body from becoming as salty as the sea itself, but this raises an important evolutionary question.

As life evolved from single-celled organisms, those organisms started as very simple cells with the bare essential metabolic functions. Possibly their DNA had no nucleus, and obviously they could not (yet) balance the salts within their body. In theory, this would say that their metabolism should have evolved to function is a salty environment. Yet, we see that this is not the case of modern organisms.

Which of the following scenarios describe the evolution of marine creatures with no excess salts in their body?

1- Metabolism may have started in a salty environment, cells have later "discovered" that less salt makes metabolism more efficient, and therefore the energy expended to clear-out the salts is worth the effort.

2- The time it took for salts to accumulate in the seas allowed marine creatures to adjust to a gradual increase in salinity.

3- Fresh water bodies (Rivers and lakes) are better suited for life to evolve. Eventually, some of the rivers will pour into the sea with all their content, including any living thing facing the challenges of salty sea water. This article mentions "ponds", but larger bodies of water are a better means of transporting those organisms to the sea.

What do we know about the timeline of changes in oceans salinity vs. timeline of evolution? Do we have fossil records that show the salinity content of the organisms?

Many biological processes require regulation of the salts (or more precisely ions) in fluid compartments of an organism. These processes include muscle contraction, filtration of the blood by the kidneys, and so on. Without these processes, a fish would certainly be dead. So it's not necessarily that regulating ions aids evolution or metabolism, nor that the sea changed salinity - the reason is that many biological processes required for an organism's survival wouldn't work without proper regulation of ions.

One such important process is active transport. In essence, by creating gradients of ions across a cell membrane, you can let the flow of ions into the cell drive other processes. This is a bit like how the flow of water through a water wheel can drive other machines.

I've never come across any reference to a cell with an ion concentration of its intracellular fluid greater than that of the ocean, though I'd slightly doubt that to exist since it would disrupt active transport. I'd also doubt that you could discern the ion concentrations of any fossilized cell since ions need to be dissolved, but how would you see this in a fossil?

I'm not sure whether I've completely answered your question, so let me know if something's still unclear.

I'm not sure that we take it for granted that marine organisms are substantially less salty than seawater.

As to my knowledge, elasmobranchii, e.g., sharks, and echinoderms, e.g., sea urchins, have osmolarities that are quite near seawater (~1000 mOsm). I expect a careful investigation would show many other kinds of marine organisms are similar. 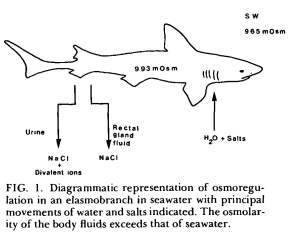 Not the answer you're looking for? Browse other questions tagged evolution metabolism salt or ask your own question.

29
Does animal blood, esp. human, really have similar salinity as ocean water, and does that prove anything about evolution?

5
How does natural selection favour large body mass and size (or so it seems)
2
Why is duck fat less saturated than cow fat?
2
Why do we weigh less in the morning?
29
Does animal blood, esp. human, really have similar salinity as ocean water, and does that prove anything about evolution?
8
Why are children more active than adults?
2
Why are some organisms able to regenerate?