Speciation can occur by polyploidy. My understanding of the process is as follows:

I realise this may not be exactly correct. Is someone able to provide a better description of speciation by polyploidy?

By definition, polyploidy just means that a cell or organism contains more than 2 pairs of homologous chromosomes (or is more than 2n). This is more common in plants than it is in animals. The plant, as shown below, undergoes failed meiosis, which means that the diploid (2n) cells never become haploid (n). As a result, a plant ends up with more than 2n when it self-polinates. The shown result is tetraploidy (4n), but there are other possible results (3n, 5n, etc).

Multiple plants within a population can end up with the same polyploidy number. They can then reproduce with each other but not with the original plants or any other plants. As a result, they become biologically isolated from the original group of plants and are considered a different species. It is a type of sympatric speciation, which means that it occurs without geographic isolation.

In the genus Rhododendron polyploid species are common especially in deciduous azaleas and lepidotes. Yet complete reproductive isolation of the poylpoid species from the closely related diploid species is the exception rather than the rule.

Closely related diploid and tetraploid species interact in natural contact zones to create triploids and some triploids are able to reproduce with both populations.

Tetraploid and hexaploid species and hybrids appear to interact even more freely than diploids and tetraploids. Pentaploids are often semi-fertile.

For Rhododendron, ploidy level creates a barrier to sexual interaction but that barrier is not absolute and is sometimes surprising porous. In fact the triploids may act as a pathway in the transition from diploid to tetraploid in that 2x (reduced) X 2x (unreduced) can create 3x and 2x (reduced) X 3x (unreduced) can create 4x. Moreover, C D Darlington established that triploids can throw 1x and 2x gametes so 3x (reduced to 2x) X 3x (reduced to 2x) can produce 4x or 3x (reduced to 1x) X 3x (unreduced) can produce 4x. Darlington documents the historical development of garden hyacinths from diploid species to triploid and then to tetraploids using a triploid pathway. The development of tetraploid hybrid elepidote Rhododendron 'Countess of Derby' also illustrates a triploid pathway.

One cannot rule out the possibility that the ability of the diploid species to interact with newly created polyploids actually contributes to the creation of the tetraploid species. 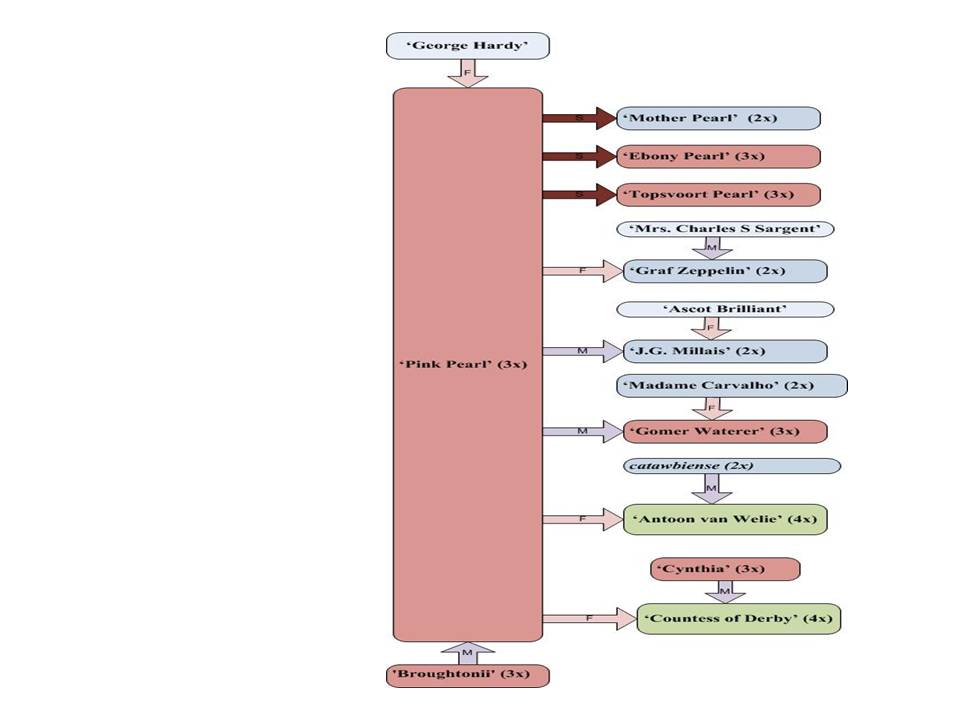 The flow cytometry for this research on the genus Rhododendon was performed by Dr. João Loureiro, Dr. Silvia Castro, José Cerca, and Mariana Castro Plant Ecology and Evolution Group, Centre for Functional Ecology, Department of Life Sciences, Faculty of Science and Technology, University of Coimbra, Portugal.

Meiosis in Polyploids by W. C. F. Newton and C. D. Darlington in Journal of Genetics 1929

The history of the garden hyacinths by C D Darlington, J B Hair and R Hurcombe in Heredity 1951

Not the answer you're looking for? Browse other questions tagged polyploidy speciation or ask your own question.

0
Why can't gametes of one species fuse with that of the other species?

5
Why was polyploidy not lethal in certain octodontid rodents?
11
Why does polyploidy give an evolutionary advantage?
8
How is genetic speciation defined?
1
What is variation in Speciation
5
Does polyploidy always isolate the polyploids from the diploid source population?
0
speciation in a single population