number of chromatids seen in karyotype

The karyotype is performed on a cell whose cycle has been stopped in metaphase or pro metaphase, using colchicine or by other means. In the textbooks I read that during the S phase each of the 46 chromosomes is duplicated, giving, again, 46 chromosomes, but, and here I am deducing, 92 chromatids. When we perform the karyotype, we only see 23 pairs of chromosomes (46, that is), and, it looks like to me, the same number of chromatids (46 as well). What am I missing? Why can't we see 92 chromatids in the karyotype?

Thanks a lot for your attention.

As you noted, karyotypes are prepared from cells halted in metaphase or prometaphase. In either of these phases, the chromosomes will have two chromatids bound together at the centromere with the chromatid arms lying parallel to each other.

The difficulty in seeing the chromatids in most karyotypes is due to the way they are prepared. Most karyotypes are prepared using Giemsa staining which causes contrasting bands to appear on the arms. These bands have patterns characteristic for each chromosome type and thus allow the chromosome images to be identified and sorted into pairs. Between the stain, lighting and exposure used to show the banding, the images don't show the separate forms of the chromatids well.

With alternative staining and lighting, the chromatids can stand out (all images from commons.wikimedia.org): 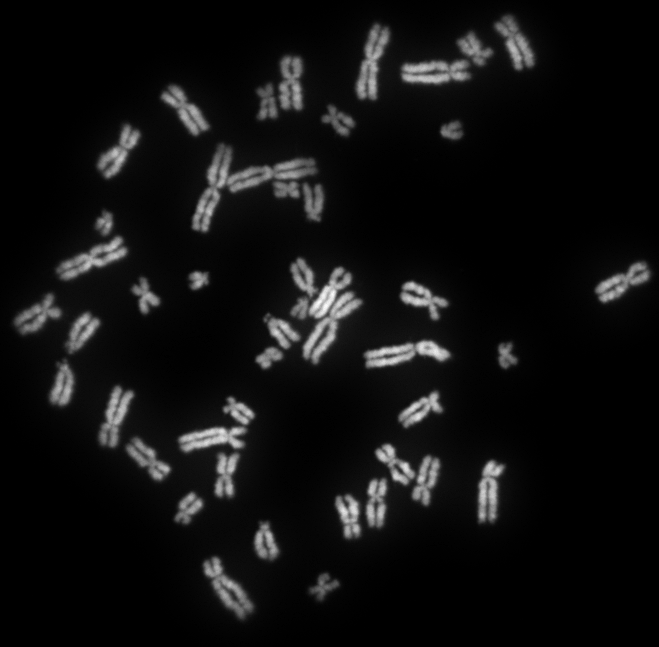 Still, in typical karotype photographs of sufficient resolution you can at times make out the separate forms of chromotid arms, or perhaps the "pinched waist" shape where the centromere draws the chromotid arms together: 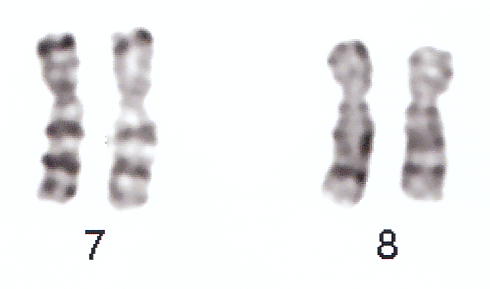 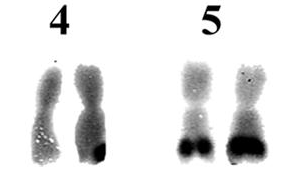 So, yes, a normal human karyotype has 92 chromatids present; they just tend not to be apparent due to the preparation done to show banding.

Chromosomes and chromatides are referring to the same physical objects, although a chromatid is mostly referring to the DNA strand, and chromosome to the "colored object" (chromo=color, some=body) that people first saw under a microscope. So, yeah, don't get confused by that, it is just that biologists like to coin terms for specific contexts.

You can see a detailed explanation here.

Not the answer you're looking for? Browse other questions tagged genetics molecular-biology karyotype or ask your own question.

2
How can Southern blotting be used to establish gene copy number?
0
Chromatids in metaphase?
7
Is there a karyotype database for human cell lines?
9
Do only one or both pairs of homologous chromatids exchange genetic material during the process of crossing over?
4
Why does this karyotype start numbering at 11?
4
Polymorphism in number of chromosomes?
5
Why is liquefactive necrosis only seen in brain?