I found this diagram in my textbook regarding the process of spermatogenesis. But, I doubt if the labelling done is correct or not. Especially, I can't figure out any difference between the cells labelled as spermatids and those as spermatozoa. Also, I doubt the labelling of Sertoli cells. Please help me clarify my doubt. 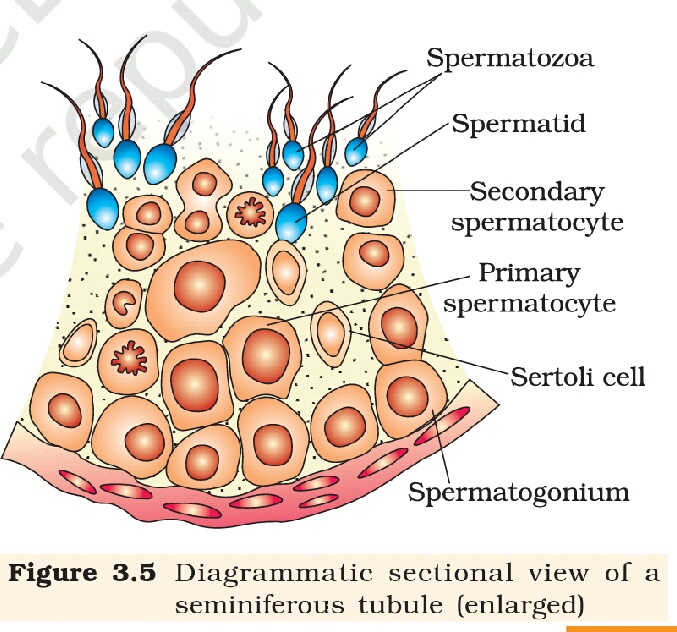 As per my textbook,

The text you added is still correct, but not well explained. Spermiogenesis is the development of the spermatid, the haploid 1N gamete produced by the second meiotic division, into a cell with a long flagella with a small amount of cytoplasm. Spermiation is the release from the sertoli cell. Both spermiogenesis and spermiation are involved in the development of a spermatid to a spermatozoon, but the specific point where we stop calling them spermatids and start calling them spermatozoa is release by the Sertoli cell, or spermiation, a substantial process in its own right. Both spermiogenesis and spermiation are important steps in the conversion of the haploid 1N gamete to a motile, free spermatozoon.

Not the answer you're looking for? Browse other questions tagged human-biology reproduction human-physiology sexual-reproduction or ask your own question.

0
T-cells Question
5
Spermatogenesis in humans - timing of phases and chromatin modifications
4
How do Sertoli cells protect sperms?
2
Why spermatogenesis is an independent process while formation of ovum is dependent on fertilization by sperm?
0
Are Males the main evolutionary tool for production of genetic variation necessary for evolution?