Is there any known mechanism by which hypokalemia reduces insulin secretion? 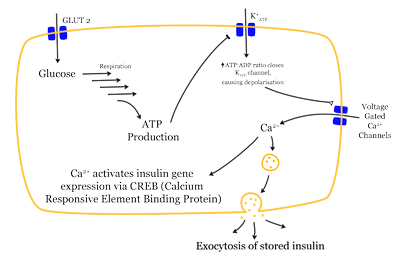 This video explains a mechanism, but its inherently wrong because ATP dependent K+ channels will allow movement of K+ from inside of cell to outside.

It's complicated, but we can understand the effect by looking at $K^+$ alone

Good catch. Yes, the video (and diagram) are incorrect. The electrophysiology of pancreatic $\beta$-cells is still an area of active research. Your textbooks (e.g., Costanzo Chapter 9, under Regulation of Insulin Secretion) will tell you that an increase in the $\frac{[ATP]}{[ADP]}$ ratio closes ATP-sensitive $K^+$ channels, which depolarizes the membrane. This is, in large part, correct, but not thoroughly understood, and not only by decreasing the $K^+$ conductance of the membrane. Further work in the years since that linked article supports the importance of a $Cl^-$ gradient and anion current, but $K^+$ conductance is still involved, and probably still underlies the mechanism through which hypokalemia reduces insulin secretion.

The membrane potential of the pancreatic $\beta$-cell, as with the neuron, is determined by both concentration gradients and permeabilities of the membrane to ions. I'm sure the OP understands this, but for the general reader, you can read about this basic principle in any neuroscience or physiology textbook. You can calculate the membrane potential using the Goldman equation or chord conductance equation. Both are representations of the same principle, but I think the chord conductance equation is more intuitive. We'll simplify for our purposes to.

Each ion has an equilibrium potential, a membrane potential at which the net current of an ion across the membrane is 0. From the Nernst equation, we can say:

I'm using examples of the neuron because this is typically where these concepts are most thoroughly taught, but lets try to apply our understanding to the pancreatic $\beta$-cell. Concentrations, permeabilities, and membrane potentials are a little different, but not that much. Resting membrane potential for a $\beta$-cell is about -60mV. Threshold potential for $Ca^{++}$ release (which leads to insulin secretion) is between -50 and -40 mV. (Refer to my earlier linked articles). I don't have an exact number for $\mathcal{E}_K$, the equilibrium potential of $K^+$ in $\beta$-cells, but it is more negative than the resting membrane potential of that cell. We know this because (as is demonstrated in the linked studies), the OP is correct, increasing the conductance of the membrane to $K^+$ causes a net $K^+$ current out of the cell, rather than in, moving the membrane potential to a more negative state (hyperpolarizing the membrane), similar to what we see in neurons.

You can use a less mathematical reasoning to work out what happens when the $K^+$ conductance decreases as well. Close a $K^+$ channel and positive ions that would have moved out of the cell stay inside the cell, making membrane potential less negative, depolarizing the membrane. This is effectively the same as bringing positive ions inside the cell.

When the membrane depolarizes, $Ca^{++}$ is released, which causes secretion of insulin.

In hypokalemia, outside concentrations of $K^+$ decrease. This has an effect on the equilibrium potential, $\mathcal{E}_K$. From the Nernst equation above, we can look at the log term to see how $\mathcal{E}_K$ changes when $[K^+]_{out}$ decreases. The fraction $\frac{[K^+]_{out}}{[K^+]_{in}}$ is less than 1 in all human cells (there is more $K^+$ inside the cell than out), so the log term is going to be log(some number between 0 and 1). You can work this out using a calculator, but in this domain (0-1), the log is negative. It is larger and negative the closer you get to 0, smaller (but still negative), the closer you get to 1. If this behavior is unfamiliar to you, I encourage you to explore it with a calculator.

If you decrease the numerator in the log term ($log_{10} \frac{out}{in}$), as we do in hypokalemia, you get a larger negative number. This doesn't change the net direction of flow, or current for $K^+$ at levels that occur in the cell. It's still net out. $\mathcal{E}_K$ is more negative than it would otherwise be, so why doesn't decreasing conductance/permeability by closing the ATP sensitive $K^+$ channels do the same thing and depolarize the membrane?

Closing ATP sensitive $K^+$ channels in the setting of hypokalemia does cause depolarization, but not enough. You have to go back to the chord conductance or Goldman equation and consider the effect of $\mathcal{E}_K$ on the membrane potential before the ATP sensitive $K^+$ channels are closed. With a more negative $\mathcal{E}_K$, the chord conductance term $\frac{g_{K}}{g_T} \mathcal{E}_K$ is more negative, and the overall $\mathcal{E}_m$ is more negative. Global hypokalemia effectively hyperpolarizes the membrane, not just in the pancreatic $\beta$-cell, but everywhere. This is an important principle for understanding the consequences of hypokalemia, not just in insulin secretion, but in all settings. As a rule, excitable membranes are sluggish in hypokalemia (except Purkinje fibers). This is why, for example, it causes muscle weakness.

Not the answer you're looking for? Browse other questions tagged human-biology biochemistry physiology pharmacology diabetes-mellitus or ask your own question.