How does LDL leave the circulatory system and enter the interstitial fluid to deliver cholesterol to cells?

I have read that small molecules like oxygen and carbon dioxide diffuse through the capillaries, but larger structures can't fit through.

This answer indicates that some proteins go through via transcytosis.

Many biologists had the same question for a number of years. In the 1950s, Nobel Laureate George Palade identified small vesicles in endothelial cells and postulated a mechanism whereby these vesicles would take in macromolecules from the luminal side of the endothelial membrane and transport them across the cell to release them to the tissues. His hypothesis has been tested, confirmed, and is now well documented.

Endothelial cells have LDL receptors that bind LDL in the capillary lumen, cause the cell to form a vesicle, and then transport it across to the membrane facing the tissues. There, the vesicle fuses with the tissue facing membrane, and LDL is released for uptake by peripheral tissue. 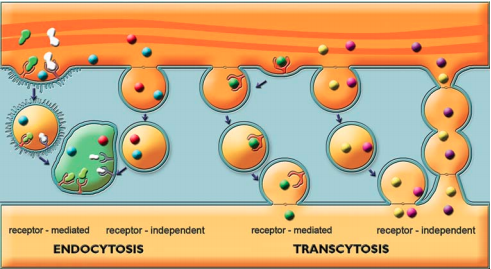 This process is called transcytosis. Endothelial cells use receptor mediated transcytosis to deliver many different large molecules to peripheral tissues in a regulated manner. You can read about this in some detail here (also the source of the figure), and more generally here.

Not the answer you're looking for? Browse other questions tagged human-biology cell-biology membrane-transport circulatory-system cholesterol or ask your own question.

5
How does most of lymph get back into the blood stream? (I don't mean the lymphatic system)
10
Why does a fetus drink and urinate into the amniotic fluid?
3
How does the adaptive immune system store information?
6
How does cholesterol affect the fluidity of a plasma membrane?
3
How does CO2 gets diffused into the red blood cells?
8
How does blood reach skin cells and other closely packed cells?
3
How easy is it for quantum dots to enter the intracellular portions of cells?