I am stuck in an ambiguity about the equilibrium potentials of neuron cells. The following text is picked up from khanacademy website:

In one part it is said that:

We'll start out with K at a higher concentration inside the cell than in the surrounding fluid, just as for a regular neuron. (Other ions are also present, including anions that counterbalance the positive charge on K but they will not be able to cross the membrane in our example.) 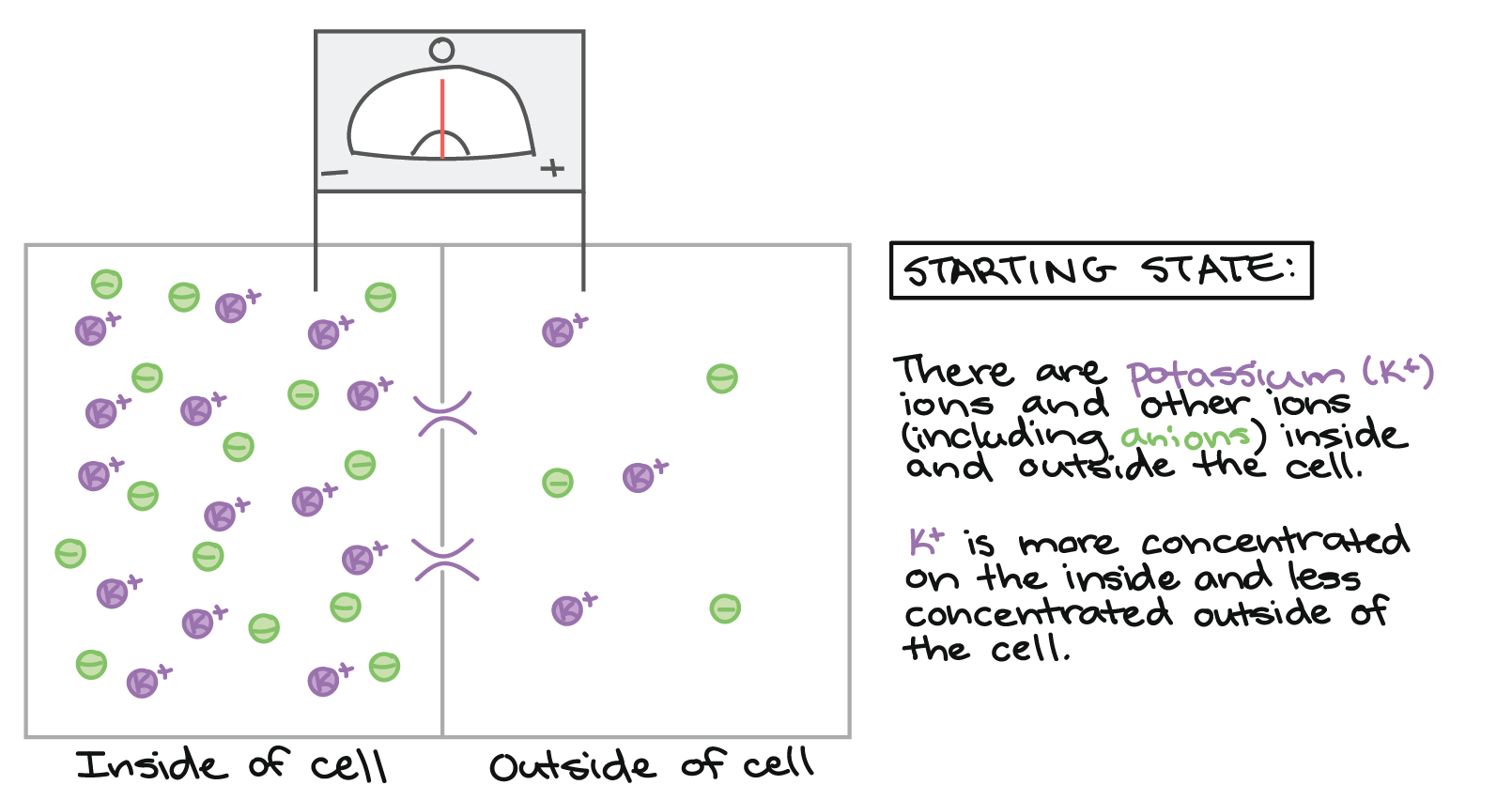 If potassium channels in the membrane open, K will begin to move down its concentration gradient and out of the cell. Every time a K ion leaves the cell, the cell's interior loses a positive charge. Because of this, a slight excess of positive charge builds up on the outside of the cell membrane, and a slight excess of negative charge builds up on the inside. That is, the inside of the cell becomes negative relative to the outside, setting up a difference in electrical potential across the membrane.

As potassium continues to leave the cell, separating more charges, the membrane potential will continue to grow. Thus, the building membrane voltage is an increasing force that acts counter to the tendency for net movement of potassium ions down the potassium concentration gradient.

Eventually, the electrical potential difference across the cell membrane builds up to a high enough level that the electrical force driving K back into the cell is equal to the chemical force driving K out of the cell. When the potential difference across the cell membrane reaches this point, there is no net movement of K in either direction, and the system is considered to be in equilibrium. Every time one K leaves the cell, another K will enter it.

In another part it is said that:

The steeper the concentration gradient is, the larger the electrical potential that balances it has to be. You can get an intuitive feeling for this by imagining the ion concentrations on either side of the membrane as hills of different sizes and thinking of the equilibrium potential as the force you'd need to exert to keep a boulder from rolling down the slopes between them. 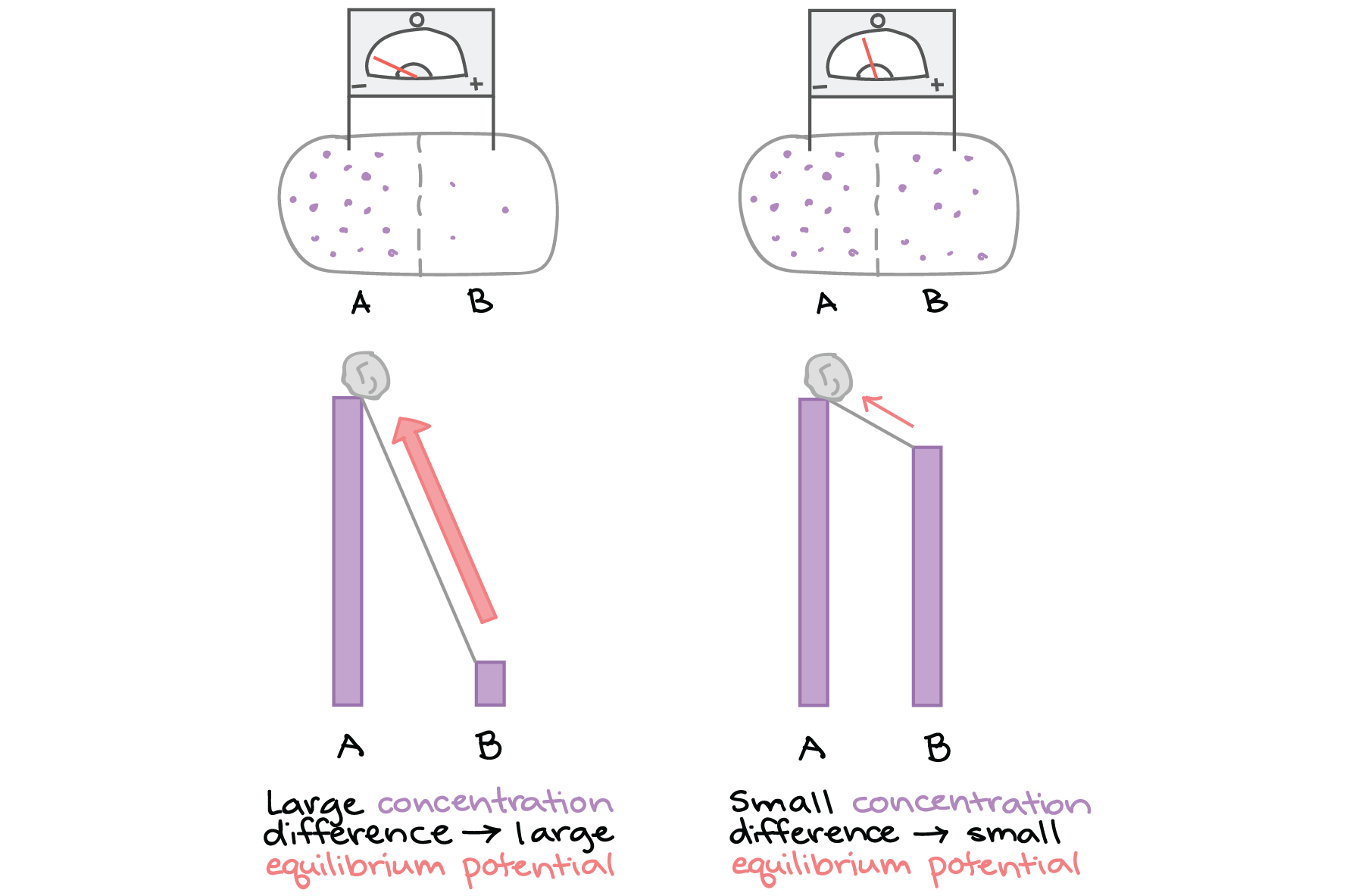 I concluded the two following information from the above text:

How to solve this paradox?

The answer to your paradox is that very few ions have to move.

The number of potassium ions that would have to move across the membrane to establish the resting membrane potential is tiny. Electrical forces are very very strong. The imbalance in ions doesn't affect the concentrations inside and out appreciably.

However, because membranes are also a little permeant to sodium, and because action potentials and synaptic transmission allow some additional ions to flow across the membrane, if you gave infinite time, eventually the ion concentrations inside and out would equalize, and the membrane potential would eventually be zero. The sodium-potassium pump solves this problem by continuing to keep potassium high and sodium low inside the cell.

Your first deduction is wrong. The sentence actually means with a greater concentration difference at the initial condition, eventually there should be a higher electrical potential to satisfy opposite chemical potential. The dynamic of the system can be described by an exponential function. The closer to the equilibrium potential we get, the smaller the rate of approaching to the final state i.e. the rate of electric potential escalation will be. Note that in reality this does not really affect the concentrations since a tiny amount of ion exchange can generate a considerable amount of electric potential.

6
Why is it possible to calculate the equilibrium potential of an ion using the Nernst equation from empirical measurements in the cell at rest?
6
Why do ion leak channels exist?
6
What Produces the Postive Potenial in the lumen of the thick ascending loop of Henle?
0
How Fast can the Electrochemical Gradient on a Neuron be Reestablished?
0
Why does increasing concentration of extracellular sodium have no effect on electrical gradient of potassium?
0
Na+ / K+ ATPase: How does it restore resting membrane potential?

2
Resting and action membrane potential..?
6
Problems understanding membrane potential
6
How does a change in the potential across a neuron's membrane get turned into a signal that is sent down the axon?
1
Changes of permeability and driving force during voltage clamp