Is there any evidence that immunity or resistance is heritable?

Is any means by which smallpox or any other disease be heritable?

TL;DR: Pre-Columbian Native Americans would have been much more susceptible to smallpox than the Europeans who spread it, because of non-heritable factors such as immunity and traditional knowledge, and also because of heritable factors. It's therefore completely believable that smallpox (and other diseases introduced by Europeans, such as measles) could have caused massive deaths among the American populations post-contact.

The title of the question makes an incorrect assumption. Resistance to smallpox would not have to be heritable to have a highly susceptible population. European populations were continually exposed to smallpox and there would have been both maternal immunity and acquired immunity in most populations, leading to a herd immunity effect that would both reduce viral spread and increase resistance among some infected people. (It's commonly believed that herd immunity needs to be very high to lead to protection, but that's a misconception -- the lower the contagiousness of the disease, the lower herd immunity needs to be to lead to protection.)

Smallpox apparently circulated as a childhood disease in northern England and Sweden, even where population densities were low and settlement patterns dispersed.

--The geography of smallpox in England before vaccination: A conundrum resolved

Cultural factors would also be important. Europeans had thousands of years of experience with smallpox, and knew that isolating victims was important to reduce spread.

We concluded that transmission was controlled in southern England by local practices of avoidance and mass inoculation that arose in the seventeenth and eighteenth centuries. Avoidance measures included isolation of victims in pest houses and private homes, as well as cancellation of markets and other public gatherings, and pre-dated the widespread use of inoculation.

--The geography of smallpox in England before vaccination: A conundrum resolved

That said, there is also evidence that European populations did have some innate resistance to smallpox that was lacking in the pre-Columbian Native Americans, and this innate resistance may be even stronger in Africa, which is (possibly) where smallpox originated:

Pathogens that diminish reproductive potential, either through death or poor health, drive selection on genetic variants that affect resistance; selection is likely to be most evident for pathogens with a long-standing relationship with Homo sapiens, including those that cause malaria, smallpox, cholera, tuberculosis and leprosy ... We noted that, for 32 viral isolates with documented mortality, death rates are lower in Africa (0.4−12%) than elsewhere (4−38%), even though all isolates were from a single phylogenetic clade. This is consistent with selection for resistance in Africa, where the smallpox virus is predicted to have evolved from a rodent-borne ancestor tens of thousands of years ago and where outbreaks of other poxviruses continue nowadays.

With smallpox eradicated, vaccine response is used as a crude phenotypic proxy for studying host resistance. Two GWASs that included European, African American and Hispanic populations identified 37 SNPs associated with cytokine response to vaccination179, 180 (P < 1 × 10−8). Most of the significant associations (65%) were found in African Americans, even though their sample size was half of that of the European cohorts, which is consistent with a larger effect due to selection in Africa.

Some resistance alleles have been tentatively mapped:

However, when examining the population post-contact and into contemporary times, variants of the HLA-DQA1 gene experience a marked frequency change. ... Although we were unable to precisely identify the selection coefficient necessary to drive the allele frequency change (since the likelihood surface is relatively flat, Supplementary Fig. 8), it is likely that relatively strong negative selection occurred. Such strength would be expected under a time frame of less than seven generations and correlates with the high mortality rates associated with the regional smallpox epidemics of the 1800s, which reached upwards of 70%

The CCR5 Δ32 mutation is a good example of an advantageous allele with a well-characterized geographic distribution. ... The mutation is found principally in Europe and western Asia, where average frequencies are approximately 10% ... Bubonic plague was initially proposed as the selective agent [2], but subsequent analysis suggested that a disease like smallpox is a more plausible candidate

--The Geographic Spread of the CCR5 Δ32 HIV-Resistance Allele

As usual, @iayork has a great answer. Let me add some additional context.

Pathogens are not disease. The result of an interaction between, e.g., a virus and a host is variable. This is a fundamental and extremely important concept in understanding infectious disease. You can read more about it in Chapter 286 of Cecil Medicine and Chapter 119 of Harrison's Internal Medicine. The clinical outcome of a host-pathogen interaction is as much dependent on the host as it is the pathogen. 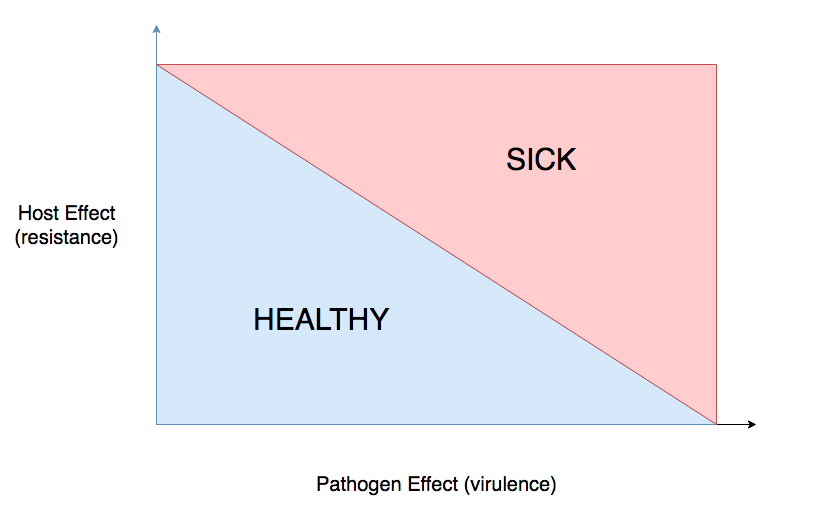 Host effects are variable and heritable

There is great interindividual and interpopulation variability in host factor side of this graph, the susceptibility/resistance to specific infectious diseases. Much of it is heritable. Sickle cell trait is an excellent example. We refer to it so often to illustrate genetic principles, that the key lesson about host-pathogen interactions is often forgotten. It was not unnoticed in the original paper. This genetic variation in susceptibility is not an exception, see Jean-Laurent Casanova's inaugural article in PNAS for an excellent discussion.

I did enjoy the discussion of the non-genetic (but certainly vertically transmitted) traditional knowledge in the susceptibility of a population to smallpox, as well as the references to single gene associations. Host susceptibility and resistance is certainly heritable, but as s/he points out, there are important non-heritable contributions to consider.

-2
Heritable immunity and smallpox vaccination
2
Can immunity to diseases vary by populations?

2
Do any nonhuman species have effective ebola immunity?
1
Which immunosuppression caused by long-term usage of these antibiotics in untreated celiac disease?
8
How do we find antibiotics?
10
Why Can't The Immune Systems of Uncontacted Tribes Handle Our Common Colds?
0
How do opportunistic infections affect an immunocompromised or AIDS patient?
1
Is there evidence that children should play in dirt to get healthy?
0
Why doesn't infection with Clostridium Tetani immunize you?