True examples of common variation due to Mendelian Inheritance

Classic examples of mendelian inheritance are genetic diseases such as sickle-cell anemia, Tay-Sachs, cystic fibrosis, and xeroderma pigmentosa. For some of these diseases, it is believed that they evolved because the genes gave a beneficial effect that outweighed the rare occurrence of the disease (e.g sickle cell and protection against malaria).

Consider eye color. In European populations both blue and brown eyes are common phenotypes. Many people have probably experienced a typical high-school class of biology, where this was introduced as an example of mendelian inheritance with brown eyes being dominant and blue eyes being recessive. However, modern studies (for example, genome-wide association studies) show that things like eye, hair and skin color are all polygenic traits. See for example (Sulem, ..., Stefansson, 2007).

Throughout the years I've heard of other traits that some said were examples of mendelian inheritance. Being able to roll the tongue, for example. This question was inspired by this recent question where absence of teeth (Hypodontia) was taught to the OP as an example of a dominant trait. The current answer says that hypodontia is probably an example of a polygenic trait that interacts with certain environmental effects. This got me wondering whether there even are examples of common mendelian variation.

I don't quite know the best way to phrase it, but my question is the following:

Take eye color as an example again. By common, I mean that both blue eyes and brown eyes are common (over, say, 5% in for example Sweden). On the other hand, for example Tay-Sachs disease occurs only about 1 in 3,500 among Ashkenazi Jews where it is most common, according to Wikipedia. Way less than even 1%.

Preferably I want it to be verified by modern genomic studies (such as GWAS) that it is an example of mendelian inheritance. If such an example does not exist, then I will accept any answer that provides modern, relevant scientific literature that explores this topic. For example, it might explain why we would not expect to see common variation due to mendelian inheritance.

Earwax consistency is an example of a monogenic trait with dimorphic phenotypes in humans -- "wet" and "dry" -- where both phenotypes are globally common, though allele ratios are highly variable between human populations. The population genetics and molecular basis of this trait are discussed at length by Dr. John H. McDonald as part of a series on the myths of human genetics (archived version here). I reformat his discussion in my answer.

In The dimorphism in human normal cerumen, Matsunaga summarizes 30 years of research into the earwax of Japanese families, with two major observations:

These results were later corroborated in Native Americans --
Cerumen in American Indians: Genetic Implications of Sticky and Dry Types

And in a different Japanese cohort --
Distribution and inheritance of earwax types: a study on inhabitants in Awa District, Chiba Prefecture

In the early 2000s, the molecular basis of human earwax consistency was elucidated in three major publications.

To directly address your question,

I point you to the tables above, as well as Table 1 from Cerumen Phenotypes in Certain Populations of Eurasia and Africa, which shows that the frequency of the dry allele ranges from 59% to 89% across diverse human populations -- 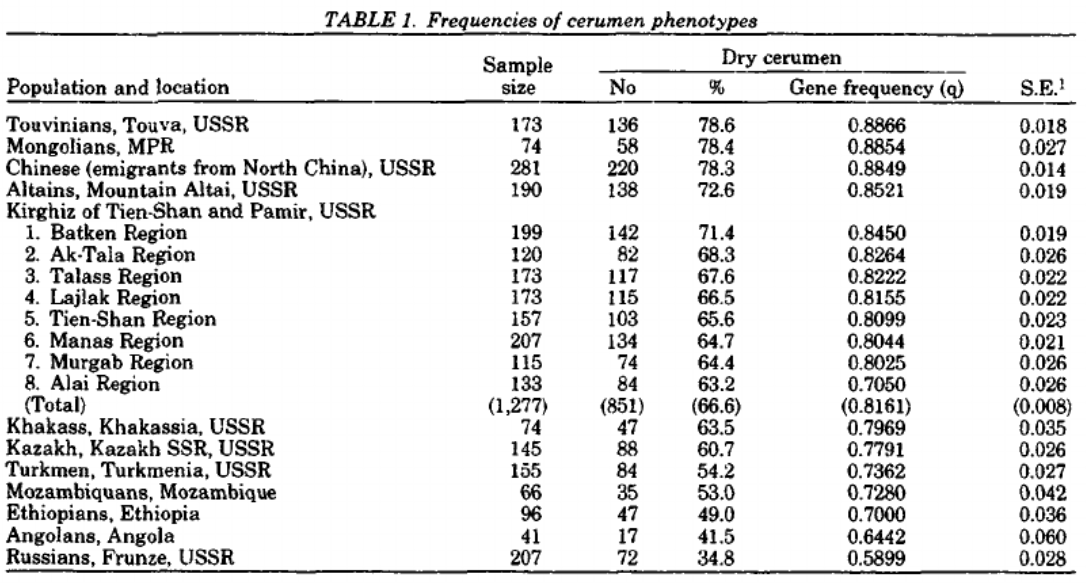 To conclude, human earwax consistency is a dimorphic trait controlled by a single gene, where both phenotypes are common across human populations.

Not the answer you're looking for? Browse other questions tagged genetics molecular-genetics human-genetics literature or ask your own question.

16
How is eye color in humans inherited?
13
Is it possible for two brown-eyed parents to have blue-eyed child?
10
Why aren't green eyes more prevalent?
2
Recessiveness of allele for protection of organism
0
How can the following data regarding flower phenotypes be explained?
2
Standard notation for dominant and recessive allele
2
Genetics and blue eyes
2
Is complete dominance actually a genotypic process?