Is there a correlation between B12 deficiency and cardiovascular disease?

I've read in several health sites that state that high blood homocysteine, as well as low B12 intake, is not only correlated, but actually causes cardiovascular diseases. In order to verify those claims, I've looked for related studies and found controversial results. This one, for example, observed no positive effects from B12 supplementation:

In this randomized double-blind trial, high-dose vitamin therapy had no effect on the outcome measures of stroke, CHD events, or death.

The author speculates several possibilities for the negative results, including that high homocysteine levels could be merely correlated, but not actually causing the problem.

I wonder if there have been advancements on that matter. Is it known whether low B12 causes cardiovascular diseases, or is merely correlated? If it is just a correlation, then what is causing both low B12, high homocysteine and increased cardiovascular disease? In particular, have any study observed if a diet rich in red meat, for example, has the positive effects that pure supplementation failed to show?

Is it known whether low B12 causes cardiovascular diseases?

Yes, it is known. B12 deficiency does not directly cause cardiovascular disease, and I would be suspicious of any health site that says it does. B12 deficiency causes hematologic and neurologic problems.

Why is low B12 correlated with high homocysteine:

Low B12 is correlated with high homocysteine because it is a cofactor for the conversion of homocysteine to methionine by homocysteine methyl transferase. Low folate will do the same thing (cause an elevation in homocysteine). 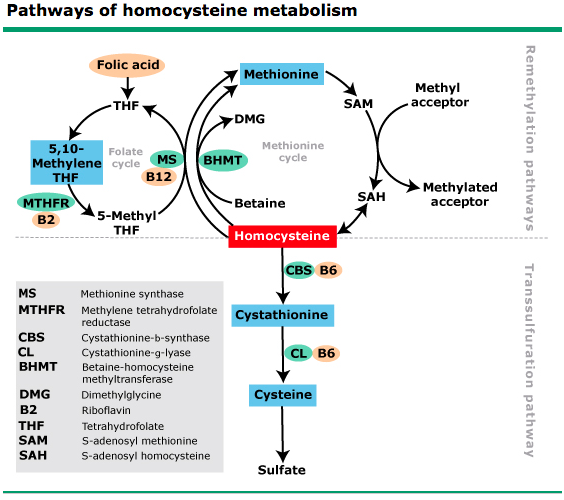 These cofactors and metabolites are involved in methyl donor reactions that are particularly important in the production of blood cells and myelin. Strict nutritional B12 deficiency (reduced intake) often occurs along with other nutritional deficiencies.

The primary hematologic problem is anemia, with associated changes in the morphology of certain white blood cells. The anemia, if severe and prolonged can contribute to cardiac problems of other causes. You also see paresthesias (often symmetric), a shuffling gait, and other odd neurological problems including depression and psychosis. B12 supplementation does not always reverse the neurological problems.

You can read about B12 deficiencies in Cecil medicine Chapter 225 and 167, Harrison's Chapter 74, and in this review.

Not the answer you're looking for? Browse other questions tagged human-biology pathology vitamins or ask your own question.