Neuron connectivity- how are they connected physically

If Neurons are only connected through synapse and there is no physical connection, how are they just suspended in brain layers?

Neurons are suspended, as you say, in an extracellular matrix. Brain tissues are a little bit more specific. Here I quote a few summaries from literature to answer and give your a perspective on your basic question. In bold I highlight important statements which differentiate the brain's ECM from the ECM found elsewhere in the body.

Ruoslahti, 1996: The extracellular matrix of the adult brain tissue has a unique composition. The striking feature of this matrix is the prominence of lecticans, proteoglycans that contain a lectin domain and a hyaluronic acid-binding domain. Hyaluronic acid and tenascin family adhesive/anti-adhesive proteins are also abundant. Matrix proteins common in other tissues are nearly absent in adult brain. The brain extracellular matrix appears to have trophic effects on neuronal cells and affect neurite outgrowth. The unique composition of this matrix may be responsible for the resistance of brain tissue toward invasion by tumors of non-neuronal origin.

Dityatev et al. 2010: The extracellular matrix (ECM) of the central nervous system is well recognized as a migration and diffusion barrier that allows for the trapping and presentation of growth factors to their receptors at the cell surface. Recent data highlight the importance of ECM molecules as synaptic and perisynaptic scaffolds that direct the clustering of neurotransmitter receptors in the postsynaptic compartment and that present barriers to reduce the lateral diffusion of membrane proteins away from synapses. The ECM also contributes to the migration and differentiation of stem cells in the neurogenic niche and organizes the polarized localization of ion channels and transporters at contacts between astrocytic processes and blood vessels. Thus, the ECM contributes to functional compartmentalization in the brain.

It's true, neurons in the brain are really sparse within an extracellular matrix. But I would like to say that there exist several type of synapsis.

The first one, to which you referred is the chemical synapse connecting the synaptic button of first neuron with the post-synaptic membrane of the second neuron. Thus in that case, you think there isn't a direct contact of pre and post synaptic membranes but the electrical signal is converted and transmitted as neurotransmitter through the synaptic cleft. To note, both axons and synaptic cleft are "covered" by other cell types, a particular type of glial cells, the Schwann cell that causes the saltatory nature of the electric signal across the axon and, at level of the synapsis, acts in order to reuptake the released neurotrasmitters.

The second type is the electrical synapse. In this one, post and pre-synaptic compartments of neurons are phisicaly connected by gap junction: these are structurally made by two hemi-channels called connexons and makes the cytoplasms to communicate and thus the electrical signals continue to diffuse thanks these connections. In that case the connection between such cells approach within about 3.8 nm of each other creating a mechanical and electrical continuity (Sheriar G.Hormuzdia et al., 2004)

Thus, when you say "neurons are only connected through synapse and there is no physical connection" it's quite simplistic. In reality, also the chemical synapsis are "connected" mechanically by a large number of cell adhesion molecules that acts in order to make and modulate the connection between neurons. For instance these include neurexins and neuroligins or Ig-domain proteins etc (Missler M, et al. Cold Spring Harb Perspect Biol. 2012). Indeed, the pivotal differences between electrical and chemical s. is the ways by which neuronal cells communicate. In the latter, the distance between pre and post synaptic membranes is wider with respect to the electrical one. 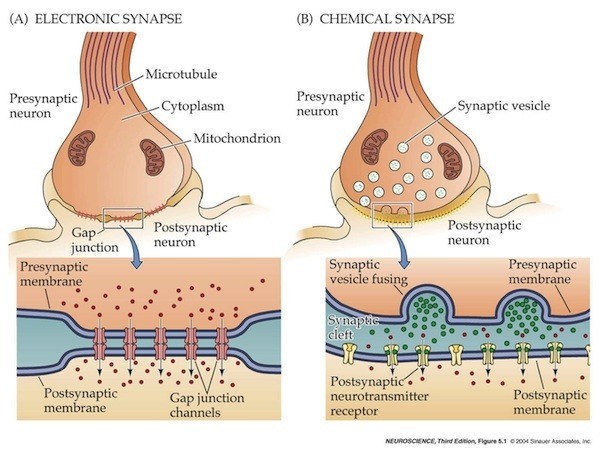 Not the answer you're looking for? Browse other questions tagged neuroscience neurophysiology neuroanatomy neurology or ask your own question.

34
How and where, in the human brain, are memories stored?
5
Neurons with thousands of connections: where are the extra connections coming from?
10
How are neurons / synapses "biased"?
5
How are sequential patterns grouped into meaningful objects in the brain?
4
Where in the nervous system are synapses chemical, and where are they electrical?
7
Do self-exciting neurons exist?
110
Are male and female brains physically different from birth?
0
How does a neuron know to which one of the next neurons to pass the signal
3
In Study from Blue Brain they say position of synapses doesn't change even if they modify neurons, only when they change shape of neuron it changes?