Do hornets return to the same nest after winter each year?

I have what I think is a hornet nest on the soffit of my house. 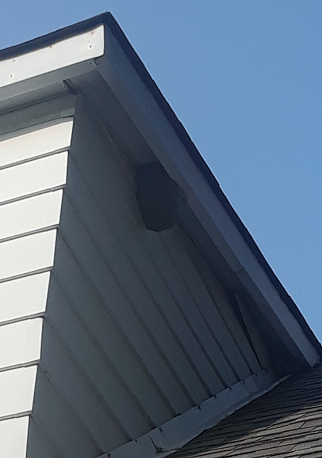 The nest has been removed, however, the hornets keep rebuilding. Also, they have started to swarm the sewer vent pipe (not shown in photo).

If fail to get rid of the hornets this fall, will they return to the same nest next year (or overwinter and continue to live there)?

I'm not sure if this is relevant or not:

To give you an idea of what kind of winters I am dealing with, I am near Toronto, Ontario; the temperature goes down to -25 degrees Celsius.

If fail to get rid of the hornets this fall, will they return to the same nest next year (or overwinter and continue to live there)?

No. The nest, likely made of wood pulp (and maybe mud), will/should degenerate to unusable over the winter, though the bulk could remain for a couple of years. All wasps die, except for the new queens (fertile, mated females) who overwinter in sheltered crevices somewhere.

In spring, it is a single wasp that starts a hive: the new queen. She builds a new, small hive in which to lay eggs, which is added to initially by the queen and then by workers who have hatched.

While she will not return to an old hive, the conditions which appeared advantageous to one queen (shelter from rain, intense sunlight, winds, etc.) will also seem advantageous to other queens, which is why nests appear in the same places year after year.

Edited to add: It appears most likely that the queens that overwinter are "new queens", that is, mated female offspring of the queen. H/T @Brian Krause.

Not the answer you're looking for? Browse other questions tagged entomology habitat or ask your own question.

6
Is there any reason the common housefly continues to return to an area?
11
Is it possible for a parasitic wasp to alter the behaviour of its host after emerging from it?
13
How do insects survive the winter?
6
Do ants use something similar to the honey bee “waggle dance” to instruct the rest of the colony where to find a food source?
4
What do red ants secrete while marching in a line, one after the other?
0
How to mark an ant with the least disturbance to the ant and the nest