How exactly does sensory substitution work?

Tot start of with your definition:

I personally like to use a more subtle definition of sensory substitution (Stronks et al., 2015):

[T]he process of obtaining information about the world through an alternative intact sensory channel [] that would normally be obtained by the deficient [sensory] system.

In other words, the information is not changed into another modality; it is simply processed by a sense normally not used for that purpose. Your definition seems to imply that the information stream is swapped. Although this is not strictly true, and hence the reason I like the second more subtle definition better, it is nonetheless true that cross-modal plasticity results in the deafferented cortical regions being taken over by other senses; for example in the blind, it has been shown that tactile and auditory information is processed in the visual regions, even down to the V1. The primary visual cortex is normally strictly associated with low-level visual processing, being the first central brain area where visual information enters the brain. Although this view is contested(V1 is also activated by tactile grids for example), in blind folks there are gross rearrangements where the somatosensory and auditory cortices take over the visual system (e.g., Pascual-Leone et al. (2005)).

'Alternative sensation' is unfamiliar to me, it doesn't pop up in a Google search, and its nonexistence is backed up by this answer.

Yes. It depends on which senses are used most extensively to substitute for another sense. Training is an important factor in improving alternative sensory capabilities. In fact, it is the determining factor; the loss of a sensory system in itself does not propagate compensatory mechanisms (Stronks et al., 2015). Compensation being

For example, training with the BrainPort Artificial Vision Device (Fig. 1), which projects electrotactile 'images' onto the tongue using 400 electrodes, gradually improves performance in the blind, all the while the somatosensory information is funneled progressively into the visual system (Stronks et al., 2016).

Pick your sensory substitution device of choice and train away; popular ones include, as said, the BrainPort (improves tactile-to-vision substitution), but also visual-to-auditory techniques like the vOICe (Striem-Amit et al., 2012). Also don't forget the guide cane, which funnels tactile information to the brain. especially the visual-to-auditory sensory substitution devices require a lot of training (Stronks et al., 2015). You can try the vOICe out yourself on an Android. However, I have tried the BrainPort myself and it is really difficult! 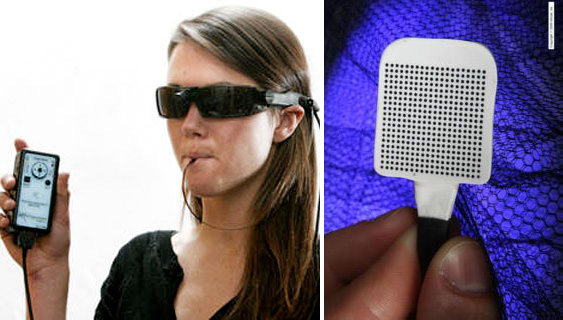 Not the answer you're looking for? Browse other questions tagged neuroscience perception senses or ask your own question.

1
What is an "Alternative Sensation"?

13
How does Golgi's neural histological stain work?
15
How does this illusion work?
5
How does the eugeroic modafinil work?
1
Sensory adaptation regarding smell and hearing
3
How does a microelectrode work?
1
Does size correlate with sensory abilities?
1
Terminology regarding sensory receptors
2
What are the response frequencies of sensory neurons?