Help identifying a fly by its remains

I recently hiked in a swampy forest in the Yaroslavl region(Eastern Europe) near lake Plesheevo and came across a clearing. Although the area was swampy and verdant, there was a 5 meter wide "bald spot" on the ground which looked like sand. Near that spot there was a lot of buzzing (which I initially mistook for the buzzing of wasps), and soon I found myself covered in these black flies.

The flies clung to my fabric hoodie, at least one tried crawling in my hair, and one tried to find its way into my eye. I tried shaking them off, but they seemed to be able to cling very firmly to my clothes. (later I discovered that even dead flies were really hard to remove from fabric) At that point I panicked, quickly retreated, and spent a good 15 minutes extracting every single one of them from myself and my garb.

When I came back, I took a picture of the carcasses of two flies that found their way into my pocket and silently passed away there from unknown causes. Unfortunately, I didn't get to take a picture of a living fly because I was too agitated at the time. 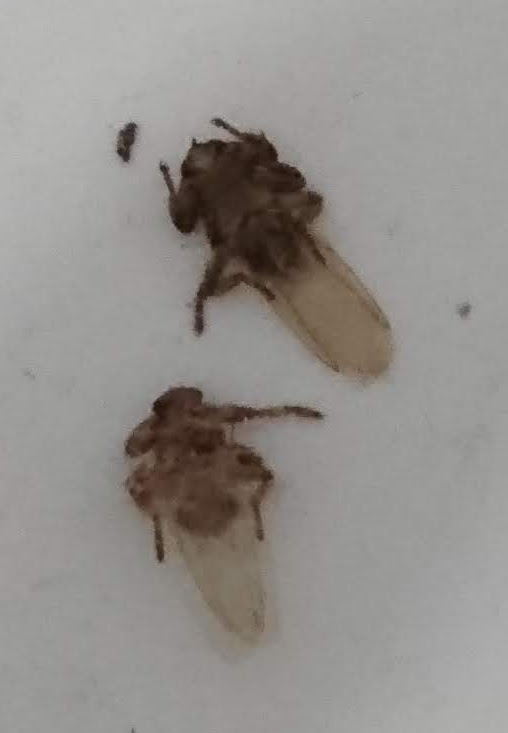 Their length was approximately 0.3 inches and when squashed, they produced yellow spots on my clothes.

I tried identifying them, but didn't have much success. They seem to look like a variety of horse-fly (or a dear-fly), but I think none of them actually bit me. Also, strangely enough, my clothes were sprayed with insect repellent which they seemed to either completely ignore or were actually attracted by.

They look very much like Hippoboscidae. https://en.wikipedia.org/wiki/Hippoboscidae This family are parasites of birds and mammals, but I am not aware that they are vectors of any diseases to humans. So don't worry. One member of the family is a wingless parasite on sheep (Melophagus ovinus)

3
Black/dark-red smooth West African worm, full of red blood
8
Cannibalizing behaviour in ants
3
Can fruit fly larvae eat plastic?
0
Insects emerging from vertical tube
3
What kind of beetle has fuzzy orange antennae and can flip its head down for digging?
1
Help identifying an insect by its remains
9
Please help identify the species of a possible butterfly