Is Human a race? [closed]

The term "race" in biology

The term "race" is sometimes used in biology as a level of categorization below the species level. It is hence not a synonym of "species" but closer to a synonym of "subspecies". The term is however quite rarely used to my experience.

The term "race" in the popular literature

In the popular literature, the definition of the term "race" has varied quite a bit through time (see wikipedia > Historical race concepts). It also vary a lot through languages and cultures. For example, in french, the term "race" is generally understood as synonym of "species", while in english it is generally understood as synonym of "ethnic group". Below, I will focus on the english definition.

A race is a grouping of humans based on shared physical or social qualities into categories generally viewed as distinct by society.

Hence, the term "race" (in the 21st century and in english) is often used as synonym of "ethnic group" (see here). Note that ethnic groups are defined very arbitrarily and have been defined much before we started to study the genetic structure of human populations. As a result the standard categorization of humans into ethnic groups only poorly represent the existing genetic diversity. For example, consider the categorization "Sub-saharan Africans, caucasians, Asians, Amerindians, and native Australians" referred to by @Eff in the comments. In here, the category Sub-saharan Africans, in itself represent the majority of the genetic diversity among humans (I eyeballed this claim from figure 1 from Tishkoff et al. 2009) 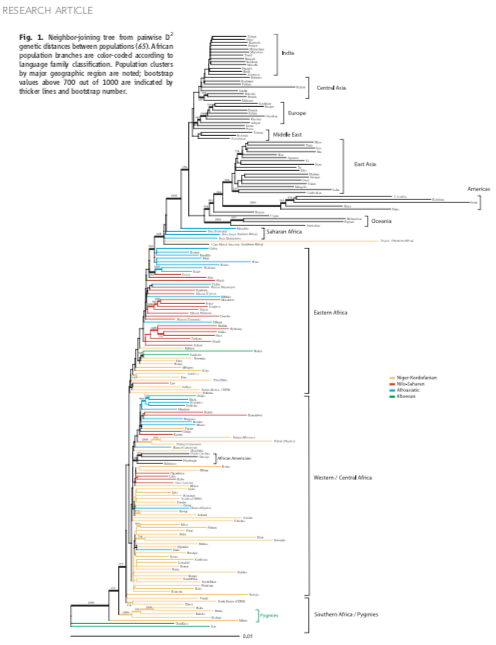 It is hard to read the post here. It is a phylogenetic tree of human populations. The below two third of the graph contain only African populations. Hence the non-African populations are nested within the African tree (or in other words, "African" is not monophyletic). See also the post Human genetic diversity in Africa in comparison with the rest of the world. To be clear, I do NOT mean that the classical grouping of populations into ethnic groups does not represent any genetic structure, I only mean that those categorization were made somewhat arbitrarily and hence only poorly reflect the genetic structure of populations.

Is the concept of species somewhat arbitrary?

Yes, it is somewhat arbitrary. For more information, please have a look at How could humans have interbred with Neanderthals if we're a different species? .

Have a look at Does it make sense to classify all humans in a single species?

Are there different "subspecies" of humans?

Typically, we do not consider subspecies of humans. However, this decision is somewhat arbitrary. The standard classification of humans into ethnic groups is only a poor representation of the genetic structure in humans. You will note that most of the genetic diversity in humans today is found in Africa only (see the post Human genetic diversity in Africa in comparison with the rest of the world).

Is Human a race?

Humans are generally consider a species (or sometimes a subspecies). The term race, when used in humans is generally used to mean ethnic groups.

No, you probably should not. While the term "species" is a somewhat arbitrary concept, it is a concept for which scientist work an agreement based on empirical data. The concept of race on the other hand is often used with very different definition by different people, when used in humans and in english, it poorly represent the genetic structure of populations. Also, the term "race" never really mean "species" to anyone. It either mean something like "subspecies" or something like "some arbitrary grouping" (aka. ethnic group).

Not the answer you're looking for? Browse other questions tagged human-biology species or ask your own question.

90
How could humans have interbred with Neanderthals if we're a different species?
39
Does it make sense to classify all humans in a single species?
11
Human genetic diversity in Africa in comparison with the rest of the world
10
What is a subspecies?