What advantage does the pseudostratified epithelial structure type provide over squamous, cuboidal, and columnar?

I'm currently and have had difficulty receiving an answer about the role the pseudostratified columnar structure provides.

I understand that that the following have their respective advantages:

In the tissue we observed from a trachea, the ciliated pseudostratified columnar was responsible for the movement of material across its surface, however it seemed that the cilia provided that, not the structure.

Why not have ciliated columnar tissue? What does pseudostratified bring to the table?

Why not have ciliated columnar tissue?

The respiratory epithelium in the trachea is columnar. The three classifications you bring up in your question: cuboidal, columnar, and squamous, describe the shape of individual cells. The trachea, as you saw in your trachea sample, has columnar epithelial cells (when healthy). The cells are longer along the axis perpendicular to the basement membrane than they are along the axis parallel to it.

You can also classify epithelium according to the number of cell layers between the basement membrane and the free surface of the epithelium. The two possible classifications here are simple (one cell layer) and stratified (more than one cell layer).

The classification pseudostratified means it looks like it's stratified, but it is actually simple. As with any other histological classification, this classification describes structure rather than function. The epithelium in the trachea is simple columnar because all the cells touch the basement membrane, but without knowing that (just by looking at a cross section) it would appear to be stratified because the nuclei of all the different cells do not line up. That is why it is called pseudostratified. The difficulty in distinguishing pseudostratified and stratified from an ordinary cross section of a trachea may be difficult to appreciate without an image. It is not obvious that there is only one cell layer above the basement membrane here, but there is: 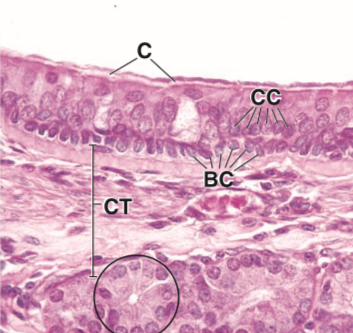 As with other simple columnar epithelial tissues, the trachea is specialized for both secretion and barrier formation.

You could speculate on the possible strengths and weaknesses of the pseudostratified structure, but it just happens to be the case that a certain cell population that has nuclei that are closer to the basement membrane (here labeled BC), and a certain cell population has nuclei that are further from the basement membrane (here labeled CC). Those cells with the lower lying nuclei are sometimes called basal cells, and are not terminally differentiated. They provide a reserve for cell replacement in response to normal loss of cells and/or pathophysiological processes like infection and inflammation. 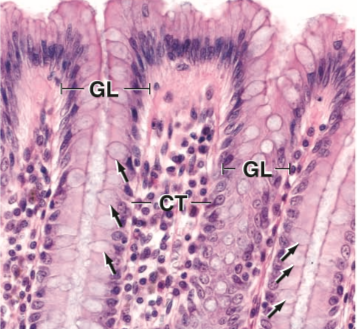 This simple cuboidal epithelium is also renewed in response to normal loss of cells and pathophysiological processes like infection and inflammation, but doesn't have a pseudostratified structure. This means, clearly, you don't need a pseudostratified structure in order to renew an epithelial surface. So I would caution you not to expect structure and function to be so neatly tied together in histology. It's a descriptive science. You can learn and understand what these structures do, but it's not necessarily a good idea to try to shoehorn the structures into logical rules. The usual answer to "why" in histology, is "because that's what it looks like".

I am not sure , but I think I read somewhere that the cells having their nuclei towards the base function as stem cells , i.e they function in replacing the tall cells ( cells with apical nuclei)

Not the answer you're looking for? Browse other questions tagged human-biology histology or ask your own question.

45
Is there any advantage to one blood type over another?
3
What are the exact differences between stereocilia and microvilli?
3
Why does the Vas Deferens detour over the pubic bone?
2
What is the evolutionary advantage of having pubic hair?
0
What is the evolutionary advantage of menstruation?
4
is it possible to visualize coronavirus infection and what type of assays are routinely used?
0
What type of epithelium are the pancreatic Islets of Langerhans?
0
Why does the body lose enzymes over time?