What is Modulation Power Spectrum?

I'm reading this paper https://www.ncbi.nlm.nih.gov/pmc/articles/PMC4562283/ , but I cannot make sense of what MPS nor how should I read the pictures that make use of this method.

The MPS, beyond classical representations such as the waveform and spectrogram (Figure 1A and B, upper and middle panels), displays the time-frequency power in modulation across both spectral and temporal dimensions (Figure 1A and B, lower panels). The MPS has become a particularly useful tool in auditory neuroscience because it provides a neurally and ecologically relevant parameterization of sounds

I'm clueless about what the meaning of time-frequency power in modulation across both spectral and temporal dimensions. Can someone provide a brief explanation about this and MPS?

A time-frequency graph also know as a TF distribution, is a spectrogram, a spectrograph, a sonogram, a waterfall display of sound. They are all different names for the same thing. They look like this:

Just as white light contains many wavelengths of colors, sound energy contains bass, mids and high all in the same moment in time, a bit like a water wave has multiple wave sizes, sound energy is the same with sound pressure levels.

Modulation refers to the variation of a simple signal, like tarzan modulates his voice using a kind of tremolo effect, so does a car alarm, and a bird has very varied squeak effects with tremolo effects and also changes from squeaks into clicks into hisses, spectral changes in the timbral quality of the sound. Modulation is a scientific word for the variations of the amplitudes and frequencies of a communications signal.

They write about temporal modulation and spectral(pitch) modulation, it's just hte changes on the time-frequency graphs.

Modulation power spectrum is a relatively obscure field of bioacoustics, it attempts to generalize the fluctuations and patterns of loudness and squeak spectrums into another graph, which is a bit like a secondary time and freqency graph derived from the first sound time and frequency graph, else a 2D graph as in the illustrations, which show sound fluctuation prevalence as an average of the TF graph(a averaged sound fluctuation prevalence of the spectrograph). so, if tarzan's voice oscillates every 1 second, he has a major modulation at 1Hz spectrally, and a minimal amplitude modulation, and they will graph that as a peak as 1Hz on the MPS graph. 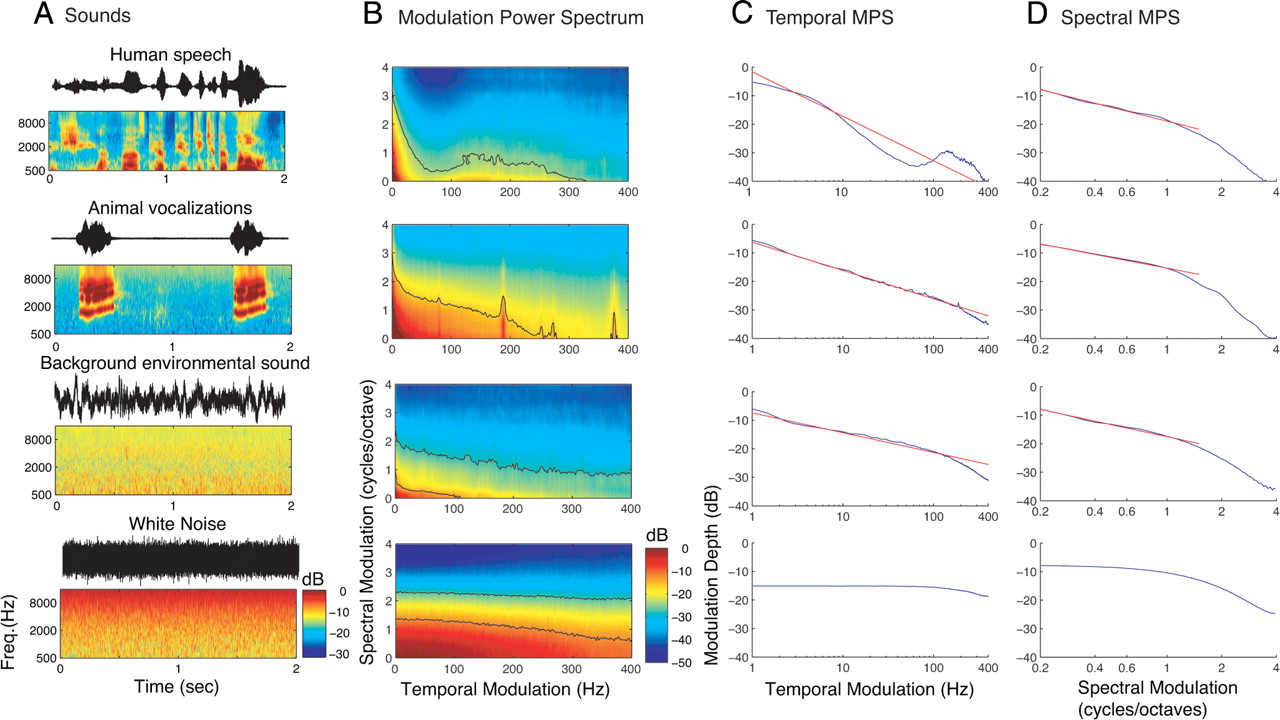 We can see on this image that The human speech spectrogram on the top left is mostly at 500HZ, with some S and CH sounds at 2000hz.

For the MPS of the human voice, they have correlated Spectral modulations against Temporal modulations. It is easy to see that the human voice mosly changes at arond 1HZ, same as tarzan's voice, because syllables and pauses take about .5 to 1 second (average words per minute of a human is about 50, average syllables per minute is about 120). So it is easy to see a temporal modulation peak at 1Hz. The less clear thing is that it is plotted against spectral modulation, which is 2-3 octaves of change, an octave being a doubling of wave speed and frequency. So we can say that the main spectral modulations of the human voice occur over 2-3 octaves at a speed of about 1Hz. There is a secondary peak, which suggest that there is a change of about 1 octave that occurs at about 200-300 HZ. That is the gruff buzz that you hear in your own man voice, it is about 150HZ and it has about .5-1octave, the base frequency of your voice being 150Hz and various 3rds adn 5ths of an octave, and another octave at 350Hz, seems to be visible from that graph. tarzan voice: https://www.researchgate.net/profile/Alexandre_Hyafil/publication/283260815/figure/fig2/AS:293940512215079@1447092287682/A-Phase-Frequency-coupling-can-be-mistaken-for-Phase-Amplitude-Coupling-Top-curves-An.png

MPS seems to have been used to study neuron responses in psycho-acoustics.

Neurons interpret sounds using some kinds of complex time and freqency variation(modulation) recognition(resolution) and the researchers use MPS as they say it fits well with the neuron psychoacoustics study.

I would suggest that there are many other ways of measuring psycho acoustic nerve responses and bioacoustics than only MPS, it is an over simplification of sound analysis, and the Digital-Signal-Processing forum on this website will inform you that there are also 100ds of other maths and analysis algorythms that you can run on sound to study Time-Frequency Graphs, and to define sound in many different ways than MPS.

very pure sounds like sine waves make tight lines on a time frequency graph, noise makes very scattered signals at all frequencies, and sounds with many harmonic modes make nice ordered lines of smaller subharmonics that reflect the base frequency of a signal, which resemble echoes of the original sound in parralel with it, and that are on a different frequency.

Time frequency graphs are quite interesting to study and there are probably some studies of bird calls on YT: https://www.youtube.com/watch?v=_FatxGN3vAM

vkehayasvkehayas
1,18911 gold badge1010 silver badges1818 bronze badges
$\endgroup$
Add a comment  |
0
$\begingroup$
Want to improve this post? Provide detailed answers to this question, including citations and an explanation of why your answer is correct. Answers without enough detail may be edited or deleted.

Not the answer you're looking for? Browse other questions tagged neuroscience methods or ask your own question.

6
What are the units of Phylogenetic Independent Contrasts (PICs)
1
What is the effect of the wavelength on the spectrophotometric measurements of protein?
1
What are known methods of non-surgically disabling neural tracts/pathways (esp. Corpus Callosum)?
3
What is an extinction test?
5
How does the brain know what to remember and what not?
4
Continuous EEG: Where does pronounced power peak at 38 Hz come from?
1
What does it mean when you "extract the filtrate with ethyl acetate three times?"
4
What is the role of potassium acetate in plasmid extraction?
2
Volley theory and sound amplitude/power