Why is Cacao a stimulant?

As I write this I've just eaten a fair amount of cacao (not cocoa) powder and it's given me quite a buzz. I've googled the effects and the Internet seems to think it's somehow psychoactive although it's hard to find a reliable source for the details.

Some sites describe the ceremonial preparation of cacao but I'm wondering if someone here knows the actual science behind the effects of cacao.

Can you please help me understand the underlying processes better?

Cacao and products made from cacao contain a number of bioactive compounds. As far as the subjective sensation of a "buzz", there are three related alkaloids present in cacao that may account for this effect. Theobromine is present in the highest concentration, but is probably less potent of a stimulant. It's not well researched. Theophylline has a number of effects, and is well studied. It has CNS stimulant effects, with a similar mechanism of action to caffeine, as a competitive antagonist at adenosine receptors. Caffeine is also present in cacao. The stimulant effects of caffeine are known generally, but if you'd like to read more about the pharmacology this is a good review.

There are probably over a hundred compounds in cacao that might possibly have effects on humans. I don't want to speculate on the ones that are not known. One that is known is theobromine.

I have seen a claim that cacao does not actually have caffeine, but I haven't checked it. Cacao might not have theophylline either. The link did not work for me.

no caffeine in cacao

Here is a picture of the structure of adenosine. 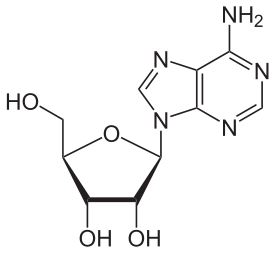 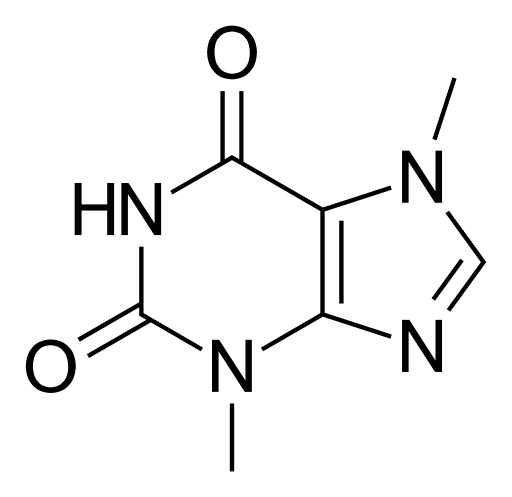 Theobromine is kind of similar to a part of adenosine. Adenosine causes your heartbeat to slow etc. There are four known receptors for adenosine which cause different cells to do different things. It's complicated.

So it's plausible that theobromine might interfere with adenosine attaching to those receptors, and might cause the result you'd get with less adenosine in your bloodstream.

Salsolinol is kind of similar to dopamine. It is created in the human brain and some gets excreted. It might possibly have some use itself and not be a waste product of something that matters. Here's one link from 2006 speculating about that.

The link I gave which appears to show serotonin up to 5% by weight is probably extremely misleading. Other sources have that in micrograms per gram. Serotonin in food is emetic -- you shit it out fast. Likely serotonin in cacao doesn't give you a lot of serotonin in your bloodstream. But it could be worth a better lit search.

Not the answer you're looking for? Browse other questions tagged human-biology metabolism food psychoneuropharmacology or ask your own question.

11
Why can't you taste food when you have a cold?
6
Why are my faeces black in color after eating Oreos
3
Why aren't we allowed to refreeze previously thawed breastmilk in refrigerator?
5
Why doesn't Diabetes cause death by starvation?
9
Why do obese people tire quickly?
3
Why cooking make foods , e.g rice, vegetable etc, soft?
0
Why do we get bored of certain food items after repeatedly eating them?
2
Why is atropine a CNS stimulant, although it blocks the muscarinic receptors in the brain?