Why are there few tetrapod dinosaur carnivores?

During the Jurassic and the Cretaceous, carnivores were mostly bipedal, dinosaurs mostly from the Therapod family.

Why was bipedalism previously a very efficient predator mode for dinosaurs, when evolution could have made some quadruped familes, at least for the 10-400 kilo carnivores? For the Paleogene, there were briefly terror birds, and since then all the major carnivore families have been quadrupeds, and mammals have not evolved dinosaur convergeant evolution towards Therapod body formats. Why not?

Most of the dinosaur predators were derived from a common ancestor. The body plan was efficient, and the theropod predators speciated widely (including birds). But statistically, the number of therapod predators are not independent observations, but linked to each other through ancestry. Similarly, most mammalian predators (Carnivora) are linked to a common ancestor. Both forms worked, but there is not evolutionary pressure to evolve toward a particular form; only pressure to favor successful accidents. So it is an interesting question, but it could be that the predator niche was filled by bipeds in dinosaurs and quadrapeds in mammals.

This is actually a really good question. Several large groups of dinosaurs (theropods, most famously) were bipedal, and highly successful at it; while today, very few mammals are bipedal. What was it about dinosaurs that made bipedalism a successful solution, while mammals typically prefer quadrupedalism?

There were two important differences between the immediate ancestors of dinosaurs and of mammals that made bipedalism more likely in the former, and both are related to lizard tails.

The classic lizard shape puts the center of gravity relatively far back: They have smallish heads, their front limbs don't have much musculature, and they tend to have long, heavy tails. So as soon as they start to accelerate -- which moves the center of gravity further back -- they automatically rear up, like a race-car starting up. In fact, as modern lizards run faster and faster, it's not unusual for them to raise up and basically become temporarily bipedal. For example, around the 45-second mark in this YouTube video. For a detailed analysis see Why go bipedal? Locomotion and morphology in Australian agamid lizards.

So as a consequence of basic lizard anatomy, they're prone to become bipedal when they accelerate. This could work out relatively well for lizards, because dinosaur ancestors started off with bigger, more powerful tail muscles that could be coopted into muscles for hind limbs.

Bipedalism, when combined with a caudofemoralis musculature, has cursorial advantages because the caudofemoralis provides a greater source of propulsion to the hindlimbs than is generally available to the forelimbs. That cursorial advantage explains the relative abundance of cursorial facultative bipeds and obligate bipeds among fossil diapsids and the relative scarcity of either among mammals. Having lost their caudofemoralis in the Permian, perhaps in the context of adapting to a fossorial lifestyle, the mammalian line has been disinclined towards bipedalism, but, having never lost the caudofemoralis of their ancestors, cursorial avemetatarsalians (bird-line archosaurs) were naturally inclined towards bipedalism.

Another argument that has been made is that bipedalism freed up the forelimbs for other uses, but that last reference pooh-poohs that notion in favor of the better transportation concept - though of course they're not mutually exclusive, early dinosaurs could have mainly gone bipedal for transport but have had some impetus from forelimb use that became less important in later species.

Because most dinosaurs evolved from bipedal ancestors. Your evolutionary baggage has a huge impact on what adaptations you can develop. Usually organisms only change their form of locomotion drastically when there is very unusual circumstances or a strong and more importantly consistent pressure. The ancestral form for dinosaurs is bipedal, this is lost in several groups but the earliest forms in each group is bipedal. Bipedal is the default. The groups that did go quadrupedal also developed many specializations for herbivory, like chewing teeth, herbivory requires some specialization including a much larger gut so becoming quadrupedal can be an advantage, although even among the herbivores many stay bipedal or hybrid bipedal unless they are very front heavy. If you are already bipedal there are not many advantages to becoming quadrupedal.

You can look at a large version of illustration here. 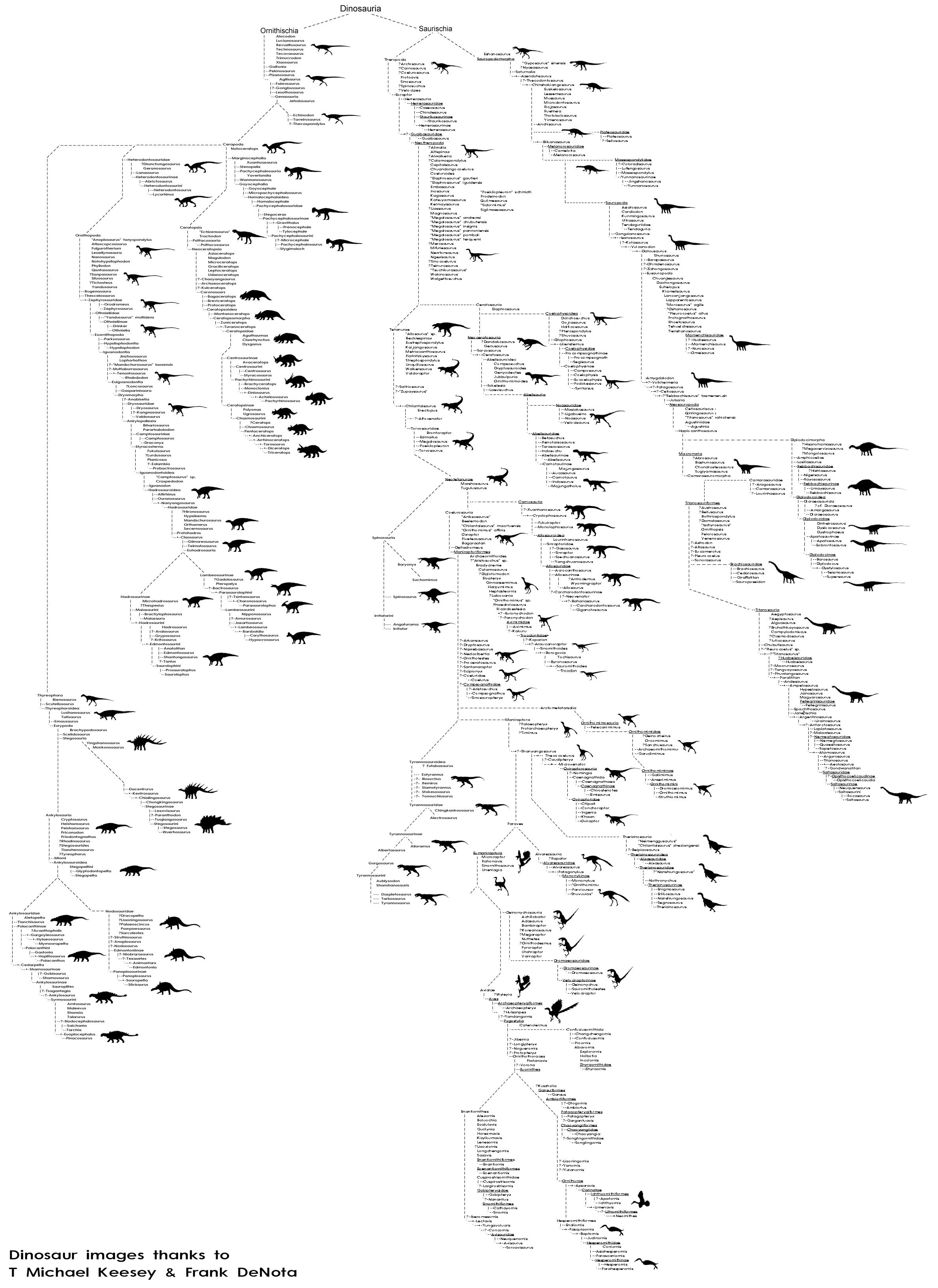 Mammals on the other hand have lost several key adaptation that make evolving bipedalism difficult, Mostly the drastic reduction of the tail which shifts mass and muscle forward, but also a weaker ankle and hip structure. The lumbar region of the spine is also a serious weakness for a biped. Most of these features are either holdovers form mammals long evolutionary history as tiny insectivores, during which we lost many features, or in the case of our lumbar region due to our breathing mechanism so they cannot be easily changed either.

Not the answer you're looking for? Browse other questions tagged evolution dinosaurs or ask your own question.