The following is an illustration rom my book of the phylogenetic tree of 6 animal phyla (the red stuff is mine): 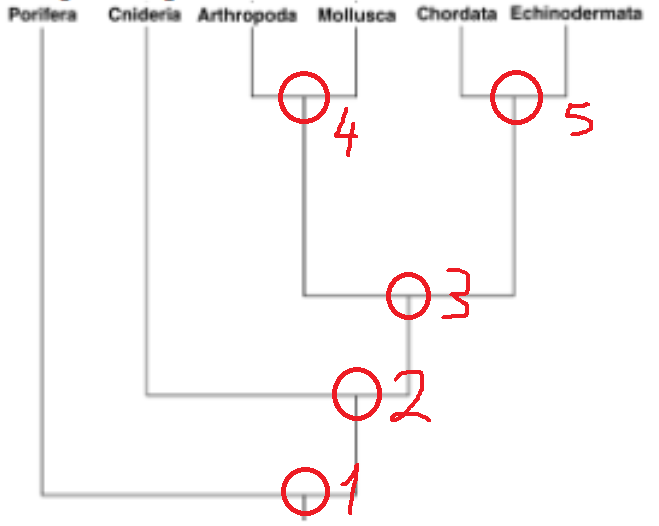 I think what's causing some confusion is that there are no names/years at the circled nodes.

My first question is, was there an actual population between nodes (ex.) 2 and 3?

I would like to check if my understanding of the tree is correct:

Before node 1, there was a population which split into two populations: Porifera and the population between nodes 1 and 2 which we will call population 1-2. This population is unnamed on the diagram, either because we don't have a name for it, or because members of that population no longer exist, or to keep the diagram simplified.

Next, after some millions of years, population 1-2 split into the Cnidarians and population 2-3. Etc.

Is my understanding correct?

Thank you very much.

Yes, your understanding is correct.

That being said, it is standard to refer to population / species at specific points in time. Also, it is standard to refer to these ancestral populations relative to what they are the ancestors of. For example, we generally don't refer to the population 2-3 (as you named it) but we rather refer to the node/population/species 3 as the Most Recent Common Ancestor (MRCA) of Athropoda, Mollusca, Chordata and Echinodermata. The tree presented here is not complete but all Athropoda, Mollusca, Chordata and Echinodermata are Bilateria while Cnideria and Porifera aren't. Hence, you could say that the ancestor at node 3 is the MRCA of all Bilateria.

Not the answer you're looking for? Browse other questions tagged phylogenetics or ask your own question.

22
If dinosaurs could have feathers, would they still be reptiles?
4
Why do the ancestors of birds still exist?