T-cells have been shown to migrate inside concentration gradients - both in the direction of the source or away. Even under shallow gradients, t-cells move. I argue that, to be able to move in a directed manner, a cell must be able to have a differential response of actin polymerization and philipodia. But I find it hard to believe that it is a differential response unless the sensor resolution not only communicates centrally, but is also extremely sensitive. How does this work?

It's understood at least that leukocyte motility is dependent on cytoskeleton remodeling and actin dynamics. In the blood, as the T cells tumble past the activated endothelium of an affected site, they're grabbed by selectins and integrins expressed on the endothelial surface. These are often illustrated as the adhesion and rolling phases of T cell migration.

Chemokines, which normally form a gradient for T cell chemotaxis, induce changes in the cellular morphology that promote migration into the surround tissues. The cells polarize into a force-generating lamellopodium with a leading edge in the front, and a uropod in the back. It appears as though actin polymerizes in the lamellopodium and juts the cell out toward the direction of the signal, and the uropod contracts in a myosin-dependent manner, releasing molecules bound there, thereby allowing the cell to tug in the direction of the lamellopodia (1, 2).

The mechanism has in fact been characterized by leading-edge redistribution of chemokine receptors such as CCR5 and CXCR4, which may have to do with actin/myosin dynamics and lipid rafts. This makes the receptor distribution asymmetric as well, and so a weaker response to the chemoattractant in the back end of the cell. The best way I could describe it is using the formation of the cSMAC in T cell receptor biology (Figure 1) (3). The SMAC is basically a synapse formed during T cell activation where receptors are concentrated to a particular area where the T cell is meeting the APC. 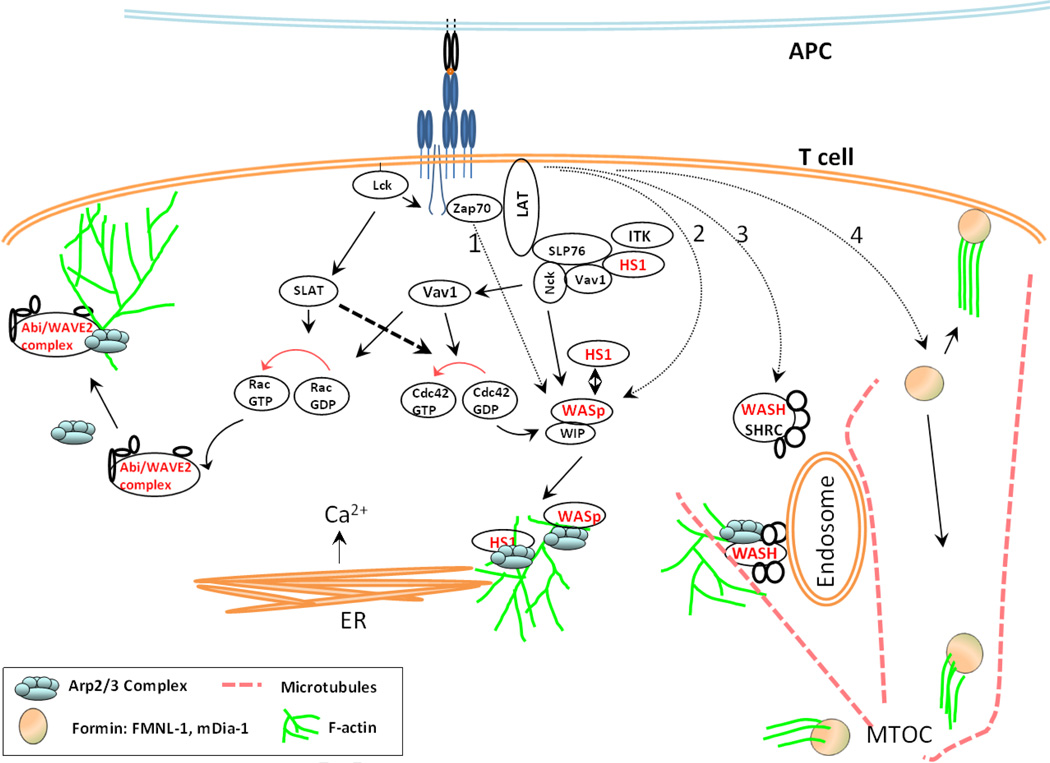 The way the authors describe it is the downstream signals from the TCR localize actin pathway molecules to the site of signaling, and causes cytoskeletal remodeling at that particular site.

Studies in neutrophils have shown that polarization leads to a frontness and backness to the cell, regulated by different proteins and inhibit the formation of one another. This is a good paper to read through on that matter, though it's a tougher read in my opinion: https://www.researchgate.net/publication/8957894_Cytoskeletal_remodeling_in_leukocyte_function

Not the answer you're looking for? Browse other questions tagged immunology cell-membrane cell-signaling or ask your own question.