As I'm teaching General Biology to my college students, I realized that I don't fully understand how a 3-P nucleotide like ATP is broken down to be incorporated into DNA during replication. How does this work??

In other words, what is the actual mechanism/reaction pathway for the following:

I understand that ATP is typically hydrolyzed to become dephosphorylated in other contexts. I also understand that a phosphate of one nucleotide is bonded to a deoxyribose of an adjacent nucleotide via dehydration synthesis from the joining of their hydroxyl groups to form DNA.

However, I cannot seem to find a good resource (online or in any of my [admittedly simple] general bio textbooks) that demonstrate how exactly both of these reactions take place during replication...

I'm assuming that DNA polymerase is taking advantage of the released phosphates from ATP (and the appropriate forms of GTP, CTP, TTP) to become activated?

Overall, what does this whole process look like on a chemical/molecular level?

I'd love a visual (especially a video) if you could provide such a resource in addition to a thorough explanation of what's going on here.

I found this paper, which goes very deep into the molecular details of the individual steps of this reaction and also discusses how this is coupled to nucleotide selectivity.

The 'basic' details about the reaction (quoted from this section, which also has a nice figure):

The polymerization reaction proceeds by a simple nucleophilic attack of the 3'OH of the primer on the α-phosphate of the incoming dNTP followed by the elimination of pyrophosphate [...] The reaction uses a "two metal ion" mechanism in which metal ion A activates the 3'OH as a metal hydroxide while both metals A and B stabilizes the developing negative charge on the α-phosphate in the transition state.

The metal ions are Magnesium (Mg$^{2+}$) and are properly positioned by the enzyme structure and some additional amino acid side chains also help with the activation of the reaction.

The answer given by @Nicolai is essentially correct (and I have upvoted it). However I feel that the question embodies certain mistaken assumptions that should be challenged so that naïve readers of the question are not misled in to accepting them. (I refer to these below as ‘problems’.) I also feel that illustrations — not included in the answer provided by @Nicolai — are needed in this respect.)

I have used a 2016 paper in Science by Gao and Wang as my authority, quoting from it and reproducing part of one of its figures for those who have not library access to this journal. The authors actually propound a ‘three-metal ion’ mechanism, rather than the ‘two-metal ion’ mechanism mentioned by @Nicolai. This, however does not affect the basic points I am making, although it serves to illustrate that the details of the enzyme mechanism are of a complexity that is unsuitable for teaching at an introductory level.

Here are two key frames from Fig. 1 of that paper: 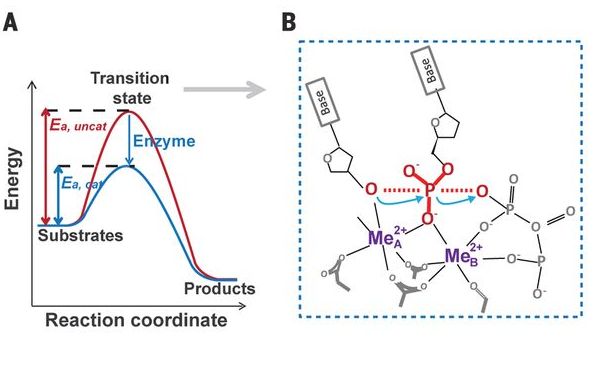 “I'm assuming that DNA polymerase is taking advantage of the released phosphates from ATP (and the appropriate forms of GTP, CTP, TTP) to become activated?”

An enzyme is not ‘activated’ by the products of the reaction it catalyses. The binding of the substrate may result in a conformation change that results in more favourable state for catalysis — and which might be referred to as ‘activation’‡ in a discussion of that topic; but the use of that word can only confuse at the level at which the current question is asked. This is because one of the key concepts in enzyme catalysis is ‘activation energy’ — the energy required to achieve the transition state. Activation energy refers to the activation of the reactants — not the enzyme. To quote from the paper:

Enzymes increase the rate of chemical reactions, which is thought to occur by a reduction in the activation energy required to reach the transition state (Fig. 1A)

Chemical reactions which result in a decrease in (Gibbs) Free Energy (the ‘Energy’ axis in Fig. 1A) are thermodynamically favourable. They occur slowly because they proceed through a transition state of higher energy. The role of an enzyme catalyst is to lower the energy to get to that transition state (the activation energy). As the figure shows, this reaction is thermodynamically favourable. The released pyrophosphate has no function, except to be hydrolysed by pyrophosphatases to prevent the polymerization being reversed.

It is unclear what the arrow at the left of the figure in the question (from the α-phosphate of the dNTP to the primer OH) is meant to represent†. Normally one would assume that this would be an electron, however here this does not make sense. As @Nicolai says

i.e. the arrow should be from the oxygen electrons of the OH to the nucleophilic phosphate. This is shown in Fig. 1B (where the nascent DNA chain is on the left and the dNTP on the right). The latter figure actually shows the transition state, which allows one to see in a general way how this could be of lower energy than for the uncatalysed non-enzymic reaction. It is stabilized by the two metal ions (Mg2+), which themselves are held in the appropriate position by acidic side-chains at the active site of the enzyme.

Footnotes
‡As @user1136 points out, the expression ‘enzyme activation’ is also used to describe action of positive allosteric effectors — small molecules that increase the activity of the active site by a structural change initiated by their binding at a site distal from the active site — the allosteric site. This is a further potential cause of confusion as it has no relevance here.

†In a comment, the poster writes “The arrow in the… picture… represents conceptual movement of molecules and not ‘real-world’ chemical interactions”. If this is what was intended (I am not familiar with the source), in my opinion the authors should have used a different style of arrow (e.g. a wider one, ➡︎ rather than ➛, and not drawn it from the phosphate to the OH. It betrays a lack of either knowledge or concern for chemical conventions, and is particularly misleading for the student who wishes to understand biology at a chemical level. I find it inexcusable in a publisher with a reputation like that of Benjamin.

Not the answer you're looking for? Browse other questions tagged biochemistry molecular-biology dna dna-replication nucleotide or ask your own question.