Where is the line between Anaerobic and Aerobic?

I am wondering how to classify respiration that uses the Citric acid cycle, but consumes a nitrite/ate or sulfite/ate instead of O2. Is that anaerobic or aerobic? 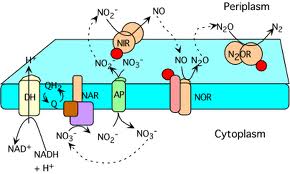 I could only find this image on Google image search catch but it said it was from http://lecturer.ukdw.ac.id/dhira/Metabolism/RespAnaer.html

Anaerobic respiration is a respiration where the final electron acceptor is different than oxygen. The final acceptor can be a less oxidizing than oxygen, like sulfate (SO42-), nitrate (NO3-), or sulfur (S). For example bacteria that use sulfate are obligate anaerobs.

The Krebs cycle cannot take place in the absence of oxygen, although oxygen is not directly involved in the cycle. The oxygen is required for the electron transport chain, which oxidized NADH and FADH2 back to NAD+ and FAD+, which are involved in the four reduction reactions of the cycle.

Agree that anaerobic respiration involves the electron transport chain and alternative terminal electron acceptors such as nitrate. However, respiring cells (whether respiring aerobically or anaerobically) can run the Krebs cycle. As long as there is a terminal electron acceptor, the NADH/FADH2 generated by the Krebs cycle can be oxidized back to NAD+ or FAD.

Most respiring anaerobes are heterotrophs, although some do live autotrophically. All of the processes described below are dissimilative, meaning that they are used during energy production and not to provide nutrients for the cell (assimilative). Assimilative pathways for many forms of anaerobic respiration are also known:http://en.m.wikipedia.org/wiki/Sulfur_oxidizing_bacteria