Data for giraffe subspecies population change over the time.

Is there a historical data for the number of animals in the wild for every subspecies of the giraffe and where it could be found?

In a recent paper in Current Biology, Fennessy and colleagues conclude that there are four species of giraffe and that their numbers are declining in Africa. Giraffes (Giraffa camelopardalis) are presently classified as one species, with nine subspecies, which are considered ‘Vulnerable’ on the IUCN Red List. The present consensus of one species divided into nine subspecies has previously been questioned (Supplemental information), and Fennessy and colleagues provide another viewpoint on giraffe taxonomy. The fundamental reason for different taxonomic interpretations is that they are based upon different datasets that adopt different statistical techniques and follow different criteria for nomenclature. Its basically a form of evolutionary process. Living giraffes were originally classified as one species by Carl Linnaeus in 1758. He gave it the binomial name Cervus camelopardalis. Morten Thrane Brünnich classified the genus Giraffa in 1772. The species name camelopardalis is from Latin. The giraffe is one of only two living genera of the family Giraffidae in the order Artiodactyla, the other being the okapi. The family was once much more extensive, with over 10 fossil genera described. Their closest known relatives are the extinct deer-like climacocerids. They, together with the family Antilocapridae (whose only extant species is the pronghorn), belong to the superfamily Giraffoidea. These animals may have evolved from the extinct family Palaeomerycidae which might also have been the ancestor of deer. The elongation of the neck appears to have started early in the giraffe lineage. Comparisons between giraffes and their ancient relatives suggest that vertebrae close to the skull lengthened earlier, followed by lengthening of vertebrae further down.One early giraffid ancestor was Canthumeryx which has been dated variously to have lived 25–20 million years ago (mya), 17–15 mya or 18–14.3 mya and whose deposits have been found in Libya. This animal was medium-sized, slender and antelope-like. Giraffokeryx appeared 15 mya in the Indian subcontinent and resembled an okapi or a small giraffe, and had a longer neck and similar ossicones. Giraffokeryx may have shared a clade with more massively built giraffids like Sivatherium and Bramatherium. Further on researches are also being made till now!

The table is a rework of the information that I found on giraffe and okapi specialist group website with additional taxonomy perspective from Wikipedia page. 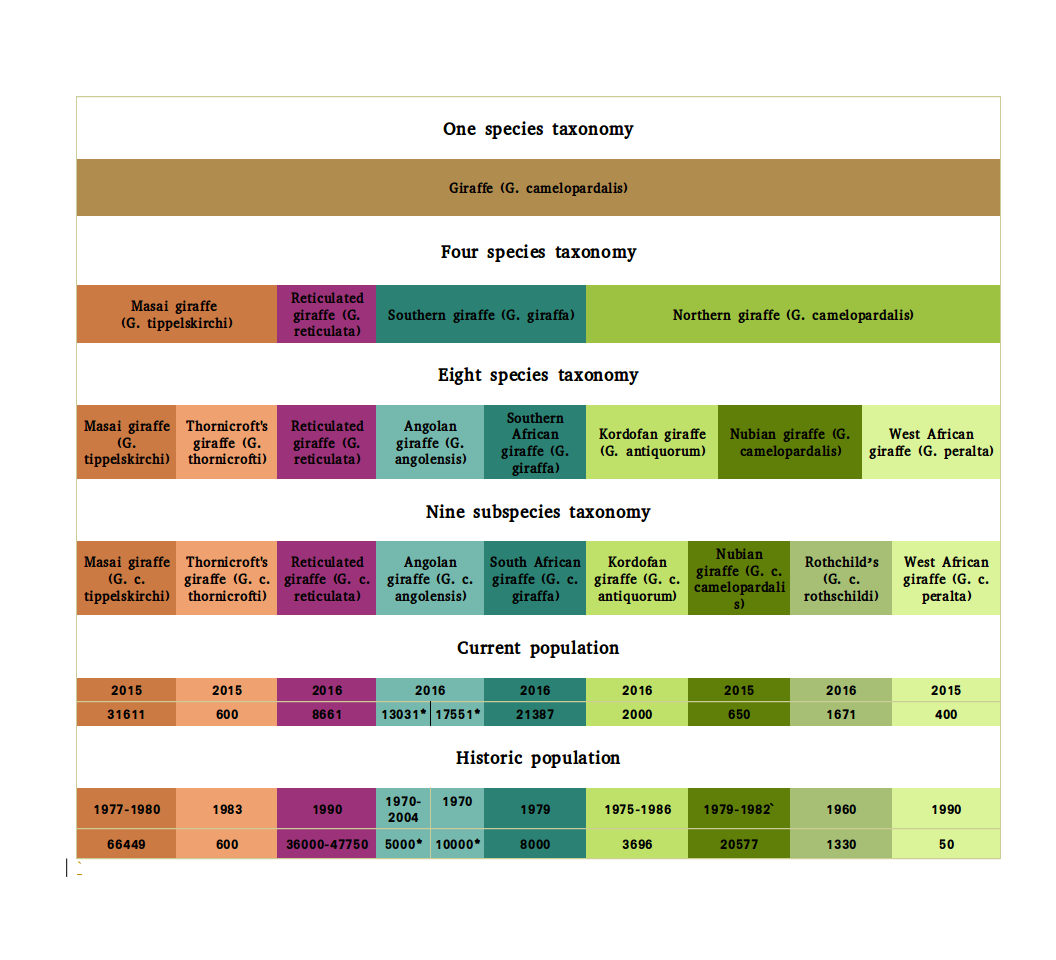 4
Does sleep duration vary for animals based on time of the year?
6
Cross-integration of puma subspecies populations
7
How animals know which is carnivorous and herbivorous?
26
Why are there no known animals with an odd number of legs?
2
Comparing the amount of domestic animals and wild animals?
2
What do bloodsucking animals actually feed on?
2
Is urban beekeeeping harmful or are there good practices to follow?