Engelmann used this device to illuminate a strand of Cladophora (not Spirogyra) with light from the visible spectrum, exposing different sections to different wavelengths (or colors of light). He added the oxygen seeking bacteria B. termo to this setup and noted where they accumulated (Note: Four years later, Hauser concluded that B. termo had been mislabeled and was not one, but three species of bacteria of the genus Proteus [2]). Their clumping allowed him to see which regions had the highest concentration of oxygen. He concluded that the most photosynthetically active regions will have the highest concentrations of bacteria. The bacteria accumulated in the regions of red and violet light, showing that these wavelengths of light generated the most photosynthetic activity. 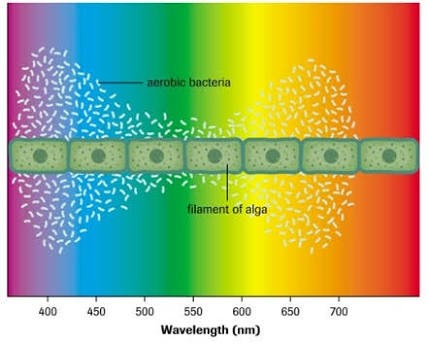 What I am unable to understand is , if photosystems I and II are activated at light wavelengths of 680nm and 700nm (primarily at the red region of the spectrum) then what type of photosynthesis is happening at the blue region due to which there is oxygen evolution?

The antenna molecules (light harvesting complex) which absorb majorly at this wavelength are transferring energy to the photocentre due to which there is excitation of the photocentre and thus OEC gets activated.

Even if this were true, then should'nt blue light be as effective as red light in helping in generating the quantum yield?

While it is true that strongest activity of Photosystem I and II happens with 700nm and 680nm light, these are not the only wavelengths that can be used for photosynthesis.

The green color of plants comes from chlorophyll, which is the main light absorbing component in the photo systems. If chlorophyll had only a single absorption peak at 680-700nm, it would have a blue(-ish) color instead of a green one.

Looking at the absorption spectrum of chlorophyll (which wavelengths it can absorb how well), you can see that there is a a second peak around 400nm:

Thanks to @theforestecologist for giving me the lead in this answer

Just to clear up, in short:

To the last part of my question on the effectiveness of red light over the blue light it can be said that:

For further reference see theforestecologist's answer on the photosynthesis

The answer you are looking for is most certainly here:

Not the answer you're looking for? Browse other questions tagged botany homework plant-physiology or ask your own question.

10
Does photosynthesis occur on cloudy days or does it require direct sunlight?
7
Why does wood become darker when it ages?
3
Why does Citric Acid occur in Citrus fruits?
16
Are two colors (red + blue) necessary for LED grow lights, or would either color be sufficient?
2
Why are newly grown leaves red?
4
Does photosynthesis begin instantly when a plant is exposed to light?