What are these bladder snail parasites?

I collected some bladder snails several months ago. While checking them out one day, I noticed that they were now infested with worm-like ectoparasites.

Here's a picture of a snail with a bunch of the worms hanging off of it's head, where they tend to congregate. I've also circled one of the worms crawling along the glass.

I sampled some of the worms and took a look at them under a microscope. Here's a video ("Video 1" below) I recorded of one of them crawling around. They have some notable characteristics.

First, they appear to have some sort of sucker mouth. 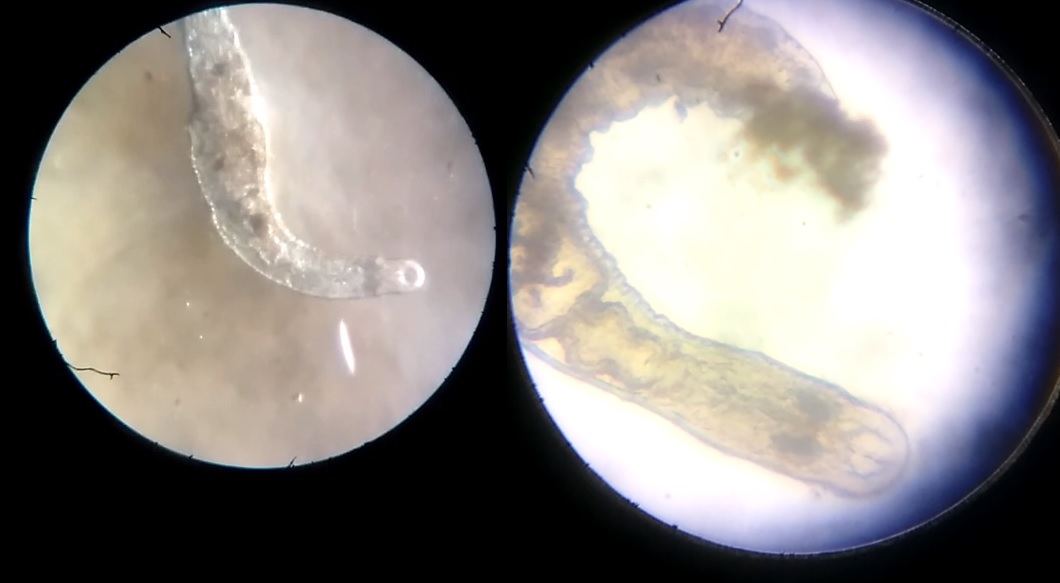 Second, they have some interesting "legs" tipped with hairs (?) at the ends of their tails. Here's a short video ("Video 2" below) of a worm writhing around that shows them off a little better than pictures do. They appear to be in pairs of two. 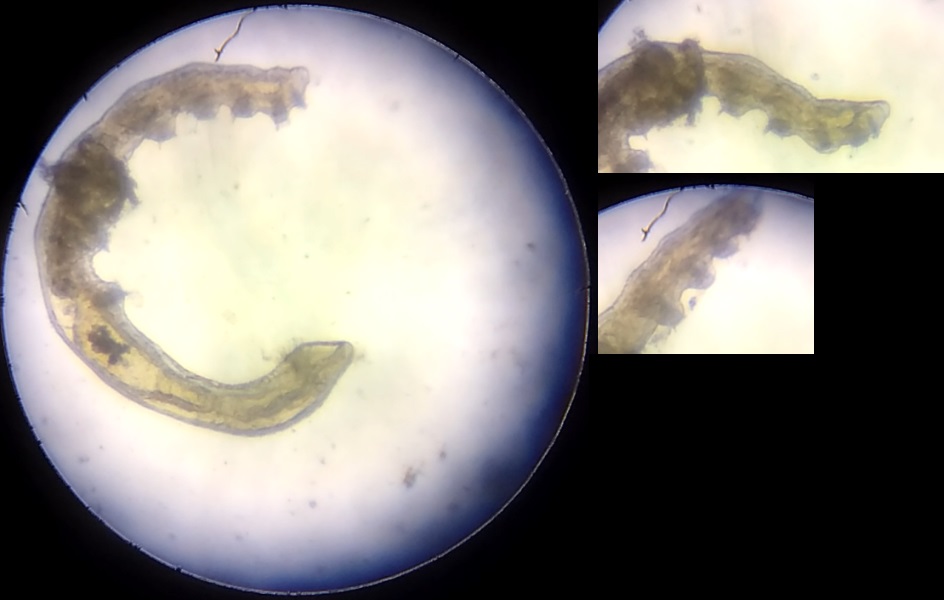 Animated clips from the linked videos:

The length of the worms ranges from 1-5 mm (edit: they get larger; see below).

Update: After keeping infected snails for a while longer, I believe that these worms only parasitize bladder snails when the worms are young (within the aforementioned size range). Larger, adult worms appear to be free-living and growing up to 1-1.5cm, and will actually crawl away when snails disturb them. Here is a picture of an adult specimen (along with some smaller ones), no microscope required: 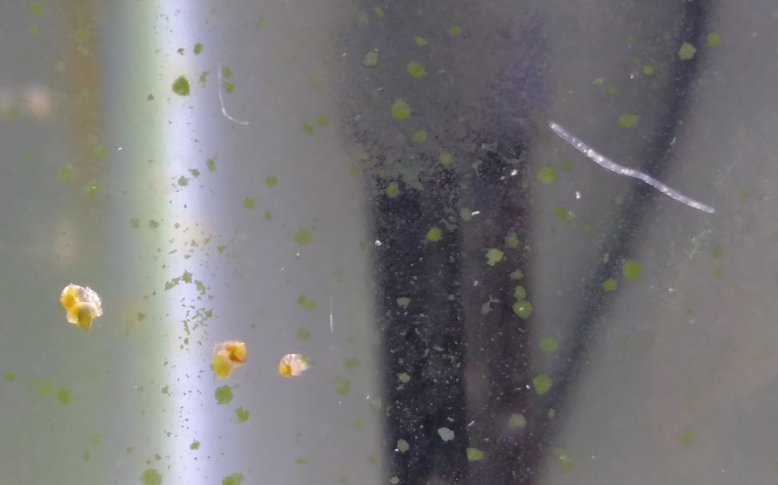 Here's a much better picture of the hair-like legs, of which this adult specimen has numerous pairs:

Lastly, here's a very interesting detail: These worms are highly specialized, and do not seem to affect ramshorn or pond snails, which I have numerous of in the same tank, in the slightest. It's only the bladder snails that end up infested.

These snails were gathered in Canada, in a still-water area connected to the Oldman River. The river is accessible by cows and deer.

I have witnessed the snails shedding tons of cercariae into the water, which eventually disappear after a couple of hours (reinfect the snails?). I'm not sure if those are related to this worm, or if the snails are also infected with some other type of fluke.

Update: I now believe the aforementioned cercariae are unrelated to the worm in question. I managed to record an adult worm releasing numerous live young, which resemble tadpoles (trochophores?):

I've recorded a video of the worm giving birth that can be viewed here (left image below). The young seem to be stored in chambers inside of the parent, and then are pumped through the body and out the back end. While the young appear to be still in the video, some of them are quite active (right image below).

I would like to eliminate these worms if possible (I can't gather more snails any time soon, and they eventually kill off smaller snails). My first attempt was dosing with praziquantel, which is supposedly effective against flukes while being snail-friendly. Unfortunately, three days later, one of the snails died, and the worms appear to be unharmed.

Update: I gathered some more snails, and attempted praziquantel once again. While it did not harm the snails, it also continued to be ineffective against the worms. I have been experimenting with Seachem ParaGuard, and the results seem to be positive for minor infestations, but not against fully mature worms.

After some research, my best guess is that they're trematodes from the class Digenea-- They appear have sucker mouths, can parasitize snails exclusively, can have a free-swimming form, and can shed cercariae. That said, I'm not terribly confident, and would ideally like to be able to identify them more specifically.

I have finally figured out what these are, and it turns out I greatly misunderstood their relationship with snails. 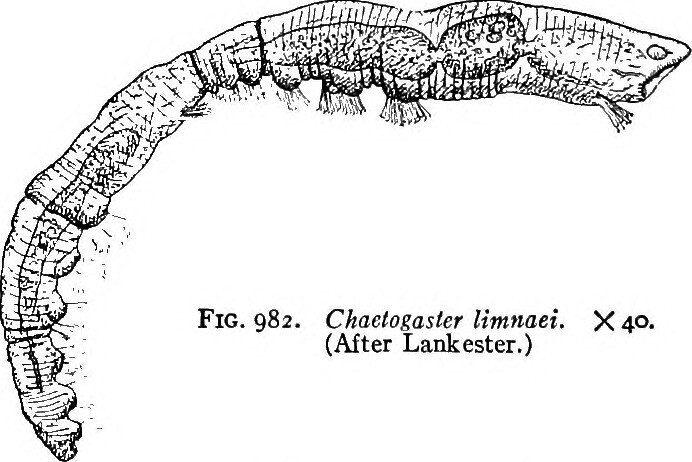 Ch. l. limnaei is unique in its genus in that lives on the bodies and in the shells of snails, including Physa spp. like the Physa acuta snails in question. While the relationship was originally thought to be parasitic by early researchers, it turns out that it's actually commensalistic (or even mutualistic in some scenarios).

From this vantage point the worms feed on various microorganisms, such as rotifers and algae, and small particles stirred up by the host snail scavenging for food. They also feed upon the cercariae and metacercariae of fluke species that parasitize the snails, even able to protect the snails from getting infected in the first place.

That said, it's not all good-- Snails with heavy infestations of Ch. l. limnaei have been shown to be less active, spending more time in their shells rather than out and foraging for food (Stoll et al., 2013). Additionally, worms have been experimentally shown to consume tissues of their hosts when food is low or nonexistent (Stoll et al., 2013).

To respond to a few points from the question:

These worms are highly specialized, and do not seem to affect ramshorn or pond snails, which I have numerous of in the same tank, in the slightest. It's only the bladder snails that end up infested.

Ch. l. limnaei is not restricted to bladder snails, and will happily live on pond snail and ramshorn species. It's possible that the bladder snails had more severe fluke infestations which the worms found preferable.

This worm is able to reproduce both asexually through budding, but also sexually as shown here. Sexual reproduction often occurs in the winter, where the worm lives freely and reproduces sexually before returning to snail hosts in the spring.

I would like to eliminate these worms if possible

I found a blog post by someone struggling with the same problem:

One day (do not know it exactly, probably few months later) I noticed that all worms disappeared. I did not know why they were gone.

Later I found the reason in the 1974 thesis. Chaetogaster limnaei limnaei is highly sensitive to temperatures above 24 °C. Such a temperature reduces or completely eliminates these worms. Therefore, If you transport worms from their natural environment to your tropical aquarium, there is no need to worry. If you have aquaria with aquarium heater, they are bound to be killed by high temperature. Worms are killed in summer heat as well.

This seems to be accurate, as with the onset of the summer heat, I no longer have any of these worms present on my snails. Now knowing what they were, it almost feels like a shame-- They were protectors, not foes.

Not the answer you're looking for? Browse other questions tagged species-identification invertebrates parasitism snail or ask your own question.