I study biology at school, and unfortunately for me, my program skips the muscles in humans chapter.

I know that the triceps straightens the elbow, while the biceps contracts the elbow.

My question is whether this action is something "special", or simply both muscles working against each other, resulting in zero movement?

The situation you are describing where muscles are situated on opposites sides of a joint and produce opposing movements is called "antagonism." Most joints are set up where one or more muscles on either sides will produce such movements (e.g., flexors vs. extensors). Here's a question about muscles without antagonists.

When you contract all the muscles crossing a joint (i.e., when you are "showing off"), the muscles balance each other. If not, the bones would move and the joint angles would change. So taking the elbow as an example, in the image below, Arnold is contracting the elbow flexors (biceps brachii, brachialis) as well as the elbow extensors (triceps brachii). In order for the bones to remain static, the forces must be equal and opposite. 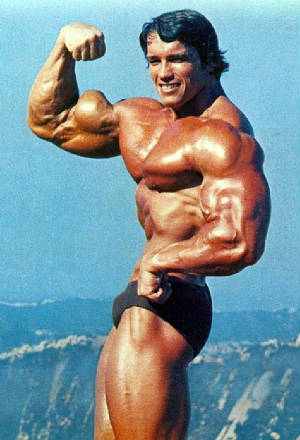 Not the answer you're looking for? Browse other questions tagged human-anatomy muscles or ask your own question.

7
Do both ends of a muscle contract?
1
How does the Pectoralis Major work when doing a bench press?
0
if the load is removed from an eccentrically contracting muscle, will it start contracting concentrically?
2
When contracting a muscle will the muscle spindle stretch or contract?
4
8 abdominal muscles but 10 pack
1
Pectoralis muscles as push muscles vs pull muscles
1
Do animal muscles atrophy slower than humans?