I understand the utility in crossovers during meiosis, but how exactly is mitotic recombination useful for dealing with DNA damage? If one sister chromatid is damaged, the other can supply a functional replacement for the defect part, sure, but then the donor chromatid will lack that section. Isn't that a zero-sum game? What am I missing?

Note: the technical term is homologous recombination (as DNA repair is actually its primary function), and this answer focusses on lesions affecting both strands at approximately the same level (as a lesion affecting only one strand at a particular location can easily be repaired by using the clean strand as a template), such as symmetrical double-strand breaks (where both strands of the double helix are severed at the same level; commonly caused by [and responsible for the main lethal effects of] overexposure to ionising radiation; used as the example type of damage for the purposes of this answer).

The homologous DNA serves as a template for synthesis of new DNA to repair the damaged area.

If both strands of a chromosome are severed at or near the same location, special enzymes unwind the broken ends, and other enzymes then clip off a length of one of the strands from each end (the strand that gets clipped off is always the one with the exposed 5-prime end, in case you were wondering), leaving an exposed single-stranded flap on each side of the break.

At this point, other special proteins grab onto these flaps, and take them looking for an intact homologous piece of DNA (that's why it's called homologous recombination), which can be either a sister chromatid (which is guaranteed to be either identical or very nearly so, and is, thus, the preferred solution when possible) or a homologous chromosome (which is always available, except for haploid cells [such as human gametes], but is virtually guaranteed to be not-quite-identical, and, thus, is a less-optimal solution).

With the help of the aforementioned special proteins, one of the flaps then butts into the homologous double helix, base-pairs with the strand it's complementary to (forming a structure known as a Holliday junction [well, technically, seven-eighths of a Holliday junction, as one of the junction's four arms has only a single strand, rather than two]), and kicks the other strand out of formation. The displaced strand forms a single-stranded loop hanging off to the side (known, unsurprisingly, as a displacement loop, or D-loop), while a DNA polymerase latches onto the bare 3-prime end of the invading strand and lengthens it, using the homologous DNA as a template.1

At this point, things can go in either one of two ways:

Here's an image to illustrate the process: 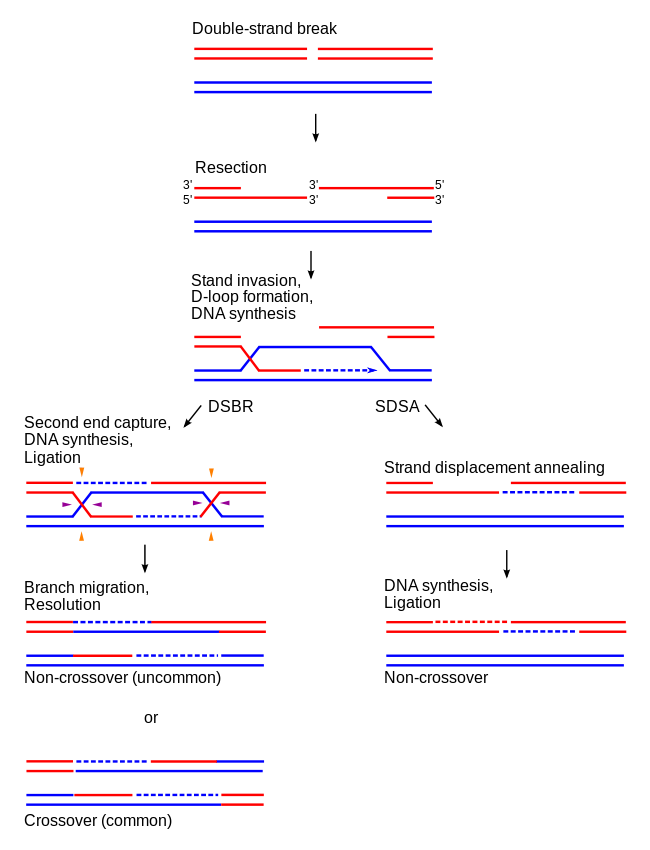 (Image by Emw at Wikimedia Commons. Blame them for the typo in "Strand invasion", not me.)

1: This is why the 5-prime strand got pruned back, and not the 3-prime strand; all DNA polymerases known to science lengthen DNA strands in exclusively the 5-prime→3-prime direction, and can only add nucleotides to exposed 3-prime ends (exposed 5-prime ends need not apply).

Not the answer you're looking for? Browse other questions tagged mitosis or ask your own question.