Why is Turner syndrome a problem?

Turner syndrome is a chromosomal disorder where one of the X chromosomes is missing. For more details visit the Wikipedia page

I don't understand why missing one X chromosome would be harmful. In normal females one of the two X chromosomes is inactivated at an early embryonic stage to a Barr body. For more details visit the Wikipedia page on this.

Which genes on the X chromosome are responsible is not yet known, but a gene called SHOX seems to be involved, which is important for bone development and growth. The loss of one copy of this gene likely causes short stature and skeletal abnormalities in women with Turner syndrome (source: NIH), see Fig. 1.

SHOX is a transcription factor of the homeobox family. It acts during early embryonic development to control the formation of the development of the skeleton. It plays an important role in the growth and maturation of bones in the arms and legs source: NIH). 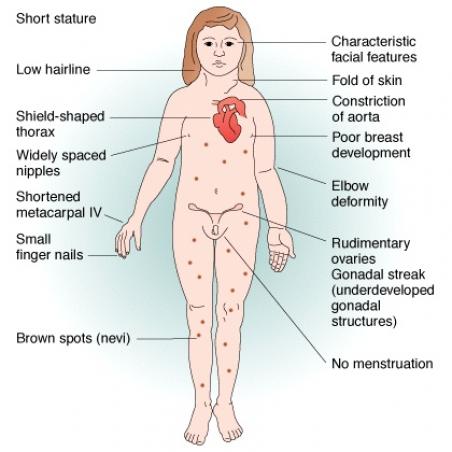 FYI - I wrote an answer before checking for duplicates. I think my answer does add additional information (the SHOX gene is not mentioned in the linked question's answer

@AliceD's answer is excellent, but I thought it would be helpful to include an additional perspective.

There is an excellent overview of this topic in Chapter 5 of Thompson & Thompson Genetics in Medicine, with a particular discussion of Turner syndrome in Chapter 6. There is also a review of the process of X inactivation, which involves usual strategies of silencing genes (conversion of a section of a chromosome to heterochromatin by covalent modifications of histone and DNA). It is just used more broadly on the X chromosome.

Not the answer you're looking for? Browse other questions tagged genetics molecular-biology sex-chromosome or ask your own question.

2
Are chromosomes from each parent split between gametes with equal probability (esp. in humans)?
3
Lyonization and X-linked disorders?
8
What effect does the Barr body have, in relation to female Turner syndrome?
2
Recessiveness of allele for protection of organism
7
Colorblindness in females and random X chromosome inactivation
10
Can a Turner syndrome patient develop male characteristics artificially?
1
Why can't Turner Syndrome occur in males?
6
Why is there Turner syndrome if one of the X chrosomes is inactivated anyway?
1
De novo mutation selectivity