What factors govern the variable age of onset in Huntington's Disease?

"Huntington's disease (HD) is a neurodegenerative genetic disorder that affects muscle coordination and leads to cognitive decline and psychiatric problems." As we all know, this genetic disease exhibits a generally late age of onset. It has been shown that a increase in the number of CAG repeats in the hungtingtin gene is negatively correlated to the age of onset of the disease. However, patients having a particular number of CAG repeats still have an extremely variable age of onset, which leads to believe that other factors are contributing to the Huntington phenotype.(reference) 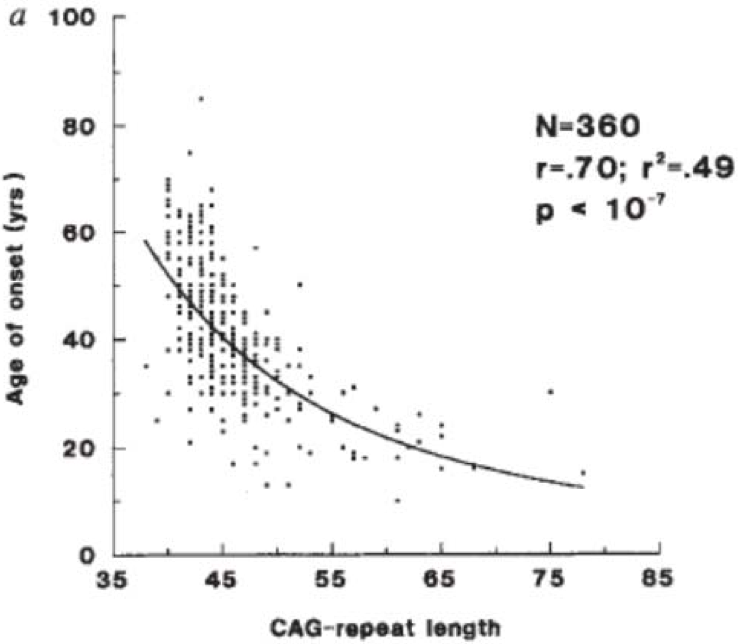 What other genetic or environmental factors have been shown to vary the age of onset of Huntington's disease?

There is quite a bit of data available from Venezuelan HD families, but they haven't identified the factors themselves. From the abstract of the paper, emphasis mine:

Analysis of the 83 kindreds that comprise the Venezuelan HD kindreds demonstrates that residual variability in age of onset has both genetic and environmental components. We created a residual age of onset phenotype from a regression analysis of the log of age of onset on repeat length. Familial correlations (correlation +/- SE) were estimated for sibling (0.40 +/- 0.09), parent-offspring (0.10 +/- 0.11), avuncular (0.07 +/- 0.11), and cousin (0.15 +/- 0.10) pairs, suggesting a familial origin for the residual variance in onset*. By using a variance-components approach with all available familial relationships, the additive genetic heritability of this residual age of onset trait is 38%. A model, including shared sibling environmental effects, estimated the components of additive genetic (0.37), shared environment (0.22), and nonshared environment (0.41) variances, confirming that approximately 40% of the variance remaining in onset age is attributable to genes other than the HD gene and 60% is environmental.

*This paper also suggests the same, with a smaller (but different) samples.

A recent study of an Italian sample suggests that a polymorphism in Atg7 (autophagy-related gene) is a modifier of age-of-onset, but this result does not generalize to a European cohort.

What is apparently not linked to age of onset in HD? β-defensin copy number variation.

Mutations in PGC-1α, mitochondrial regulator, were previously associated with age of onset, but a more recent study suggests that this might have been due to stratification of the sample.

Similarly, a polymorphism in HAP-1 was previously associated with age of onset, but a subsequent study found no evidence of association.

Altogether, these results suggest that population stratification needs to be taken into account when evaluating associations between age of onset and genetic polymorphisms. It is also possible that there are population-specific genetic factors that affect age of onset.

Not the answer you're looking for? Browse other questions tagged genetics pathology human-genetics neurodegenerative-disorders or ask your own question.

-1
Can Huntington's Disease be homozygous dominant?

7
What are some of the immediate challenges to break through before finding a cure for mad cow disease?
3
By what mechanism does coeliac disease cause excess fat in the feces?
6
Inheritance of Huntington's disease
5
How was the Huntington's disease gene's location found?
2
Earliest and latest onset of Huntington's Disease(Chorea)?
6
Reason for variation in the site of onset of edema
2
Why is the mechanism of inheritance for this disease autosomal dominant?