How does the NAD+/NADH ratio affect lifespan in vertebrates?

Here's the proximate physical implication of the ratio (from the Wikipedia article on NADH).

The balance between the oxidized and reduced forms of nicotinamide adenine dinucleotide is called the NAD+/NADH ratio. This ratio is an important component of what is called the redox state of a cell, a measurement that reflects both the metabolic activities and the health of cells. The effects of the NAD+/NADH ratio are complex, controlling the activity of several key enzymes, including glyceraldehyde 3-phosphate dehydrogenase and pyruvate dehydrogenase. In healthy mammalian tissues, estimates of the ratio between free NAD+ and NADH in the cytoplasm typically lie around 700; the ratio is thus favourable for oxidative reactions. The ratio of total NAD+/NADH is much lower, with estimates ranging from 0.05 to 4. In contrast, the NADP+/NADPH ratio is normally about 0.005, so NADPH is the dominant form of this coenzyme. These different ratios are key to the different metabolic roles of NADH and NADPH.

So here's my question: how does this manifest in vertebrate aging? Is it something that's simply the resultant of other aging processes, or can the ratio also contribute to aging in a certain way?

This study found a statistically significant decline in NAD+:NADH ratios and in intracellular NAD+ with age in the organs of rats.

They discuss that the activation of PARP - the NAD-dependent enzyme Poly(ADP-ribose) polymerase-1 instrumental in DNA repair - increases in aging organs (heart, liver, kidneys). This depletes cellular NAD+ levels via poly(ADP-ribosylation) of proteins. This reduced cellular NAD+ then reduces the effectiveness of Sirtuins (Sirt1) which can deacetylate tumor-suppressor proteins such as p53.

Here's schematic showing the basic idea from their figure 10: 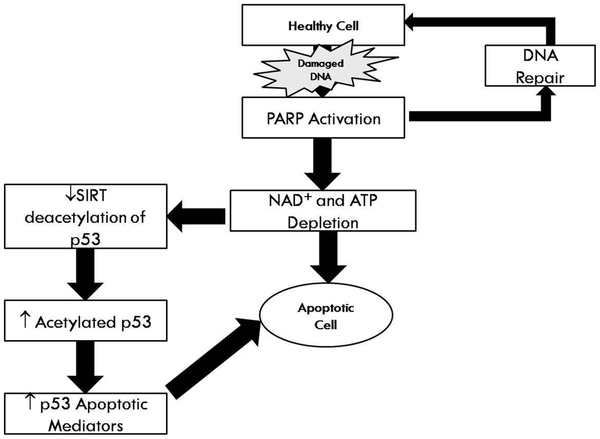 Not the answer you're looking for? Browse other questions tagged senescence or ask your own question.

5
Does AMP/ATP ratio affect lifespan in vertebrates?
3
Does the speed of electrical impulses through neurones decrease with age?
5
How much does the Hayflick limit/telomere length vary across taxa and within humans?
1
How does the body repair extracellular damage caused by glucose?
2
How does the telomere repeat sequence vary in Eukaryotes?
5
Does increased physical activity increase the rate of cell division?
10
How well does the radius of a tree correlate with its age?
3
How much does hearing deteriorate with age?
1
If senescent cells are removed by the immune system, how can they contribute to ageing?