Does a mutation in the sense strand of a particular gene affect the polypeptide formed? 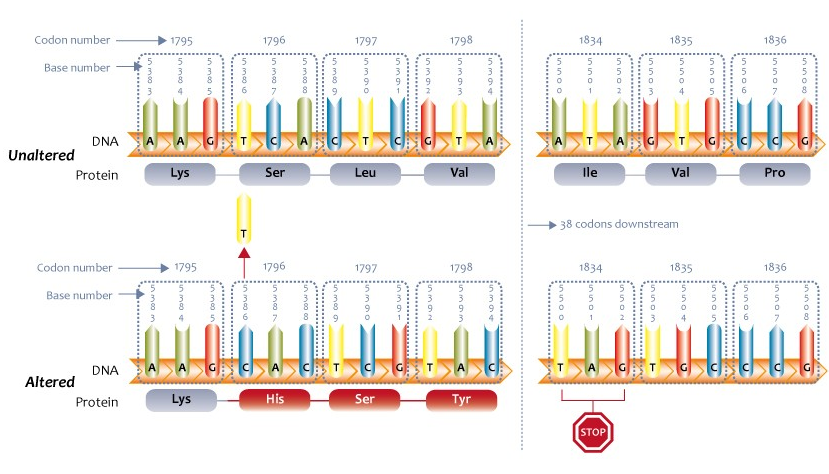 Recently, I came across this picture which represents the DNA sense strand of a gene.

The ‘Altered’ picture shows a (frameshift) mutation in the nucleotide sequence in which a T base is deleted.

We’re doing it for the children!

The basic misconception in this question is that the important effects of mutations are seen in the cell that undergoes mutation. This is not the case. So focusing on the whether the strand that receives a mutation is the non-transcribed, sense, strand or the transcribed (anti-sense) strand is of little relevance.

What is important is whether or not the mutation is passed on to the progeny.

Don’t we have a life too?

Why isn’t it important? Consider a mutation occurring in a single E. coli cell in a population of millions of E. coli, or a single muscle cell in a human muscle. Even if there is a mutation in the strand that is transcribed into mRNA and translated into protein, the change in that one cell will not have a significant effect on the overall population.

The birds and the bees

The way in which a mutation — on sense or anti-sense strand — can affect a population of bacterial cells or whole tissue in an organism is:

Still harking on about sex (Yawn)

If the mutation is advantageous these cells will grow and divide and out-compete the other bacteria in the population.

A similar explanation holds for tumour cells in a differentiated animal tissue.

In the case of germ-line cells in animal tissues the situation is slightly different — the mutation either will be present or absent in both strands of the dsDNA in the fertilized egg, and so will affect all of the cells in the tissues of the progeny in which it is expressed.

Does a mutation in the coding strand change the base sequence of the template strand?

The DNA molecule is composed of two paired, complementary strands of DNA which--by definition--must be paired and complementary. A deletion of a base on one strand would be replicated such that the new DNA molecule would be deficient at that position on both strands. Here's a nice summary that also includes animations.

And, if you are instead asking whether there are ever exceptions to this very basic rule of molecular biology, then yes, so-called "bulged bases" have been reported (e.g.here) but they are still considered anomalous.

2
How does frame-shift mutation not absolutely ruin the organism?
1
How does gene editing in one cell affect other cells?
0
On enhancers, strands, and zygosity
1
Is a gene located in the sense or the anti-sense strand?
1
Is the barcode COI sequence the sense or antisense strand of DNA?
5
What is the difference between silent and synonymous mutations?
1
GEN file format, SNPs and alleles
0
gene mutation occurs on two strands of DNA or just one strand?