How does the intracellular accumulation of cyclic AMP cause edema in case of anthrax?

Edema factor is adenyl cyclase which is activated only inside the target cell. It leads to intracellular accumulation of cyclic AMP resulting in edema. How?

Edema factor is a high efficiency adenylyl cyclase, an enzyme that converts ATP to cyclic AMP (cAMP). cAMP is an important second messenger in many pathways, which you can read about in Albert's Molecular Biology of the Cell. In order to be an effective second messenger, it must be tightly regulated. Several bacterial toxins disrupt this regulation, by creating an excessive amount of cAMP directly (B. anthracis EF), forcing the local activator of adenylyl cyclase to stay on (V. cholerae CT), or preventing the local inactivator of adenylyl cyclase from turning it off (B. pertussis). Some of these pathways are well understood. The pathway between cholera toxin and lethal loss of intestinal fluid, as mediated by elevated cAMP, is particularly well understood. The pathway between edema factor, edema toxin, cAMP, and tissue/organ edema is not well understood, as illustrated by this lovely figure, from this review: 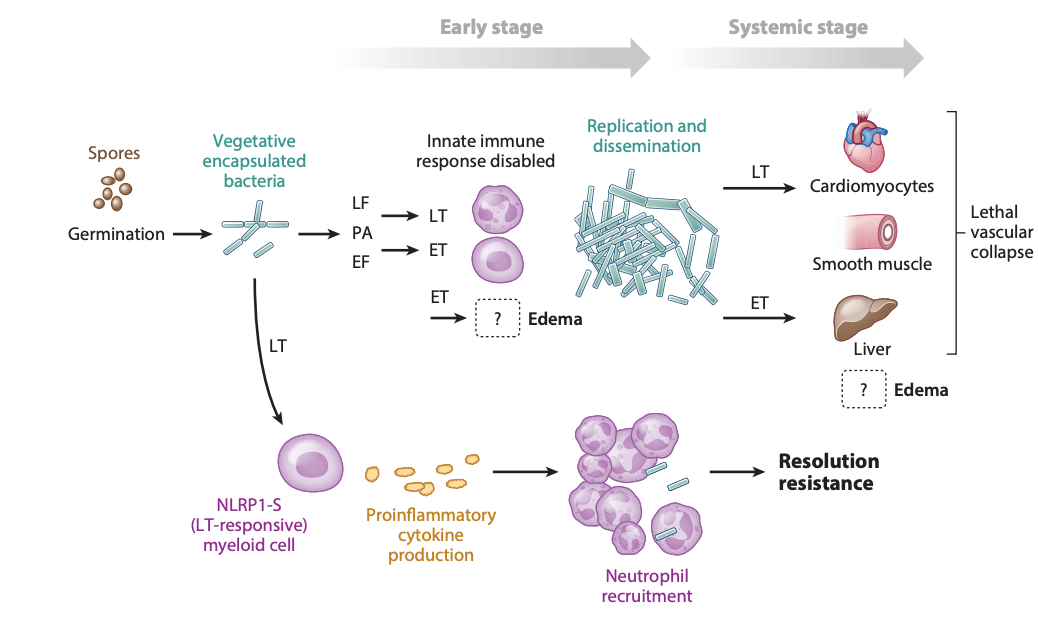 Note the nice question mark between Edema Toxin and Edema

Not the answer you're looking for? Browse other questions tagged microbiology or ask your own question.

2
How HIV Affects and Its Treatment using Combination Therapy
1
How does activation of adenylcyclase lead to increased cAMP and diarrhea?
0
Shigella's O antigen (PAI synthesised) and passage through host defences
3
Why do 6-8% of diphtheria patients do not develop natural immunity after being affected?
3
What does it mean to perform in vitro experiments with mutant bacteria?
4
How does Cro protein expressed by lambda phage kill its host?
2
When two amoeba cells form from one amoeba, does spindle fibers form?
7
Can single-cell organisms have through-holes? (Are donut-cells a thing?)