What is the evolutionary relationship between heme, chlorophyll and other tetrapyrroles?

As a non-biologist, I have searched the Internet and found dozens of papers discussing the similarity between the structures of heme and chlorophyll molecules, but I could not find any discussion of their evolutionary relationship.

To be more specific, I would like to know whether the use of tetrapyrrole in the blood and in photosynthesis can be traced to the earliest organisms in which tetrapyrrole had some function, and then the molecule evolved to be capable of the different functions it currently performs in animals and plants.

I found this question interesting, so that, despite my general ignorance in this area, I have attempted to address the question of the evolution of tetrapyrroles rather than answer it. Additional contributions are welcome as comments. I apologize for the large graphic, which I feel is indispensable to my answer, however I have included a summary above it, so readers can decide whether they wish to read further.

Although the cyclic tetrapyrrole structure looks complex, it appears to be very ancient, presumably because of the greater chemical versatility of its complexes with metal ions in proteins, compared with simpler proteins that contain metal ions. The ring provides a precise four-co-ordination which can be held in position to provide two additional co-ordination sites (at right angles to the plane of the ring) which can interact with protein side-chains or other molecules (such as oxygen). The combination of ion, substitution of the tetrapyrrole and interaction with the protein allows fine-tuning of the redox properties of the ion.

The diagram below (adapted from Zappa et al.) shows the four main types of tetrapyrrole in proteins and how their biosynthesis is related. The two mentioned in the question are actually both derivatives of protoporphyrin IX: chlorins, such as chlorophyll — with its role in photosynthesis — and haem proteins — with the examples of the cytochromes of the electron transport chain being more widespread than that of haemoglobin in eukaryotes. In addition, however, are the corrins — most notably in Vitamin B12 with a role in methyl transfer — and sirohaem — which occurs in certain sulphite and nitrite reductases. 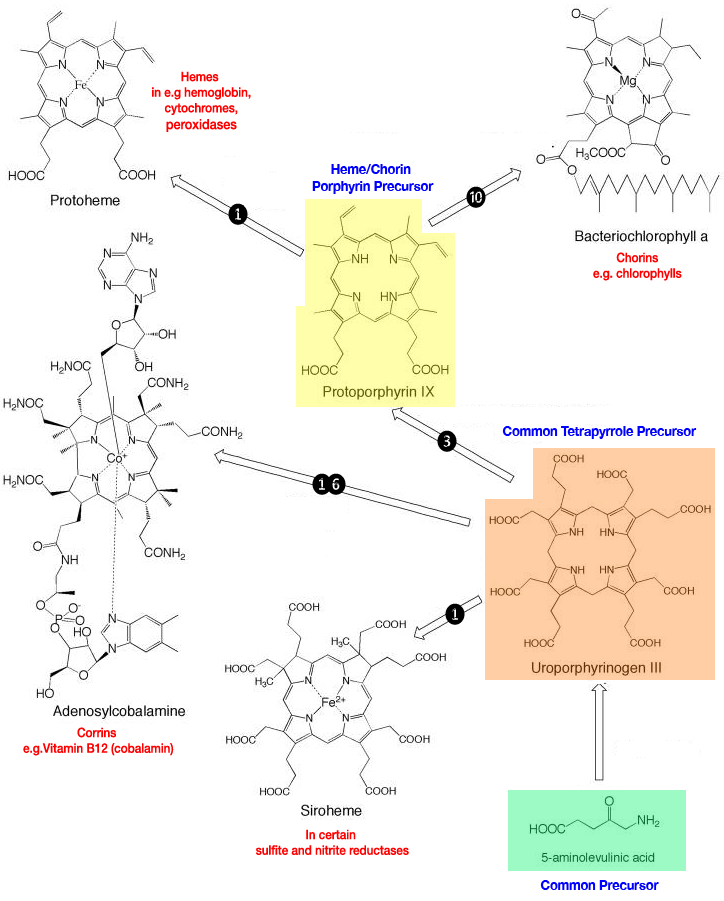 How can we address the question of which tetrapyrrole was first to arise? This question is, in fact, which synthetic pathway — which series of enzymes — was first to arise. In my review of the literature I (like the poster) find this an area which angels are fearful of, but, being foolhardy, I suggest two criteria. The first is what we consider the relative ages of the functions the proteins subserve, and the second the relative complexity of the pathways needed to synthesize them.

The first criterion is subject to dispute. Unfortunately the easy comparison between haem as an oxygen carrier in eukaryotes and chlorophylls as ancient prokaryotic photosynthetic proteins is complicated by the more ancient role of haem in cytochromes. One might argue that cytochromes are a feature of aerobic metabolism that followed the emergence of oxygen generation by photosynthesis, but unfortunately the electron transport chain exists in anaerobic organisms, where the terminal electron acceptor may be nitrate, nitrite, ferric iron, sulphate or carbon dioxide. Given this, and the greater complexity of the pathway from protoporphyrin IX to bacteriochlorophyll a compared with that to protohaem (10 steps compared to one), one might argue that chlorins emerged after haems.

But what about the other tetrapyrroles? One approach to relative ages is to consider the biochemical processes that might have been present early after the emergences of life. One such analysis of this was made by Weiss et al. in a paper published in Nature Microbiology (2016) 1, 1–8, entitled “The physiology and habitat of the last universal common ancestor”. They drew the conclusion that the Last Universal Common Ancestor (LUCA) was an anaerobic autotroph that existed in a hydrothermal setting and obtained energy using a Wood–Ljungdahl pathway with hydrogen as the electron donor and carbon dioxide as the electron acceptor. The two types of tetrapyrroles that they postulate would have been present in the LUCA are corrin (as cobalamin for methyl group transfer) and sirohaem for sulphur metabolism (sulphite reductase) in the hydrothermal environment. No mention of porphyrins! Given the complexity of the 16 step pathway to corrin, compared to the one-step pathway to sirohaem, one might suggest that the latter evolved first.

5-aminolevulinic acid (frequently referred to by its old name of δ-aminolevulinic acid) is the precursor of uroporphyrinogen II, the common tetrapyrrole precursor. However there exist two pathways by which this can be formed, of which, as I understand it, only one is present in any organism. One of these (at least to my thinking) could have evolutionary implications. These pathways are shown below in a figure adapted from a paper on prokaryotic haem biosynthesis by H. Panek and M.R. O’Brian (2002). 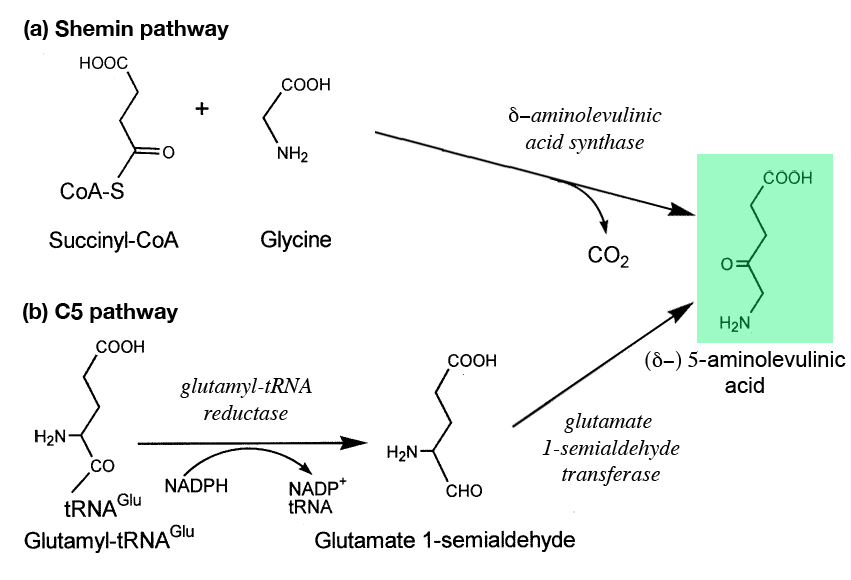 The intriguing aspect of this is that one of the pathways (the C5 pathway) involves reduction of glutamyl-tRNA, whereas the other (the Shemin pathway) is a conventional synthase reaction with substrates glycine and succinyl-CoA. Arguments supporting the RNA world hypothesis include catalytic RNA, and the presence of nucleosides in molecules such as NAD where there complexity belies the simplicity of their function. So, putting my head over the parapet again (to vary my metaphors), I would suggest that the use of glutamyl-tRNA for the synthesis of this ancient and important intermediate might be another fossil of the RNA world. (Perhaps not what the poster had in mind in posing his question.)

Note the molecules are not that similar, only one portion is similar.

Many biological molecules have similar structures to other molecules, especially ones that perform similar tasks, there are only so many shapes you can make with carbon atoms, the shape of a molecule affects its chemical properties and that shape is simple and has useful properties. Heme itself is a functional component of many proteins called hemoproteins, basically whenever they need to bind iron. Another cyclic tetrapyrroles would be cobalamin otherwise known as vitamin B12 which binds cobalt.

Its the same reason hammer handles look very similar even in very different cultures, just attaching a stick is a simple easy to discover solution, so it is the one that gets found most of the time. Functionally that is the shape that works. Or to put it another way they are only so many shapes you can make a wheel.

To address the updated question. I honestly don't know if they share an evolutionary origin. But given that they are synthesised in different organelles (mitochondria for heme and chloroplast for chlorophyll, I would guess no.

Not the answer you're looking for? Browse other questions tagged photosynthesis molecular-evolution protein-evolution or ask your own question.