If mammals evolved to be nocturnal, then how did we get so staunchly diurnal in such short time?

Much of human health revolves around sleeping well through the night. We know about circadian and body temperature rhythms which make us sleepy at night, peak melatonin production in the middle of the night, deep sleep phases, sleep disruption from light at night, and high cancer rates among people who work the night shift.

Clearly, we are built to sleep at night. You would suppose, then, that we must have evolved to be diurnal long ago and descend from a long line of diurnal animals.

Yet, the evolutionary legacy of mammals is predominantly nocturnal. Mammals started out as nocturnal (to avoid the reptiles) and most mammals today are still nocturnal.

How did we get so staunchly diurnal so quickly?

The Nocturnal bottleneck for mammals as it's called was assumed 'til recently to have only ended at the Cretaceous–Paleogene extinction event 66 million years ago.

At the basis of the nocturnal bottleneck hypothesis lies the idea that Mesozoic ectothermic reptiles (including dinosaurs) would be restricted to daytime activity at times when the sun can help to heat up their body to operating temperatures.......

Recent molecular analyses have added to the doubt of the original theory:

saurischians are now generally believed to have had partial endothermia, allowing them to incubate their eggs and inhabit colder regions...... 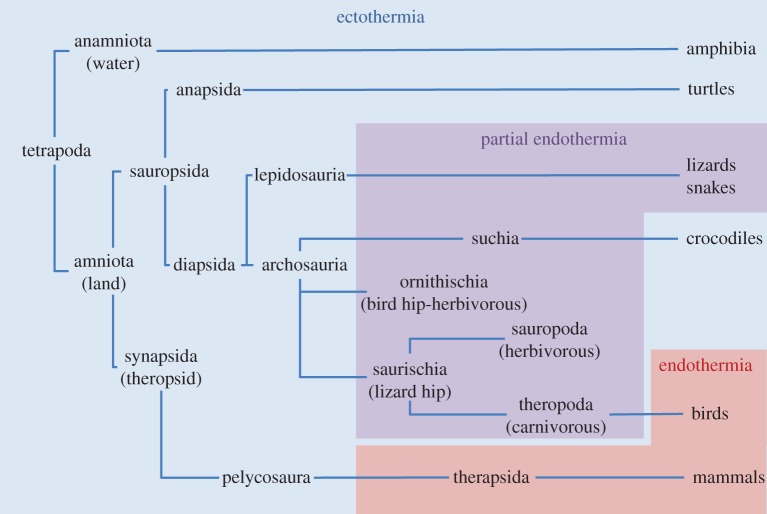 The implication being that the pure nocturnal adaptation in mammals would not be a completley effective strategy for predator evasion.

In a large comparative study [Roll], divided 700 species into classes of dominant temporal activity niche: nocturnal, diurnal or both (mostly crepuscular). They used an existing phylogenetic construction to reconstruct the evolution of diurnality in rodents, which are thought to have diversified after the K/T boundary. The reconstruction of temporal niche usage within rodents led to the conclusion that rodents shared a nocturnal ancestor that existed before the K/T boundary. Subsequently, diurnality evolved through secondary evolution at least seven times independently in Rodentia.

Using the molecular phylogenetic construction of [Huchon et al], we constructed the temporal niche phylogeny within the full therian subclass using the nocturnal, diurnal and crepuscular/arrhythmic classification of [Roll et al.]. The most parsimonious interpretation leads to a minimum of 16 changes of dominant temporal niche.

Most subdivisions of Theria are indeed nocturnal, but many changes and reversions occurred, and different interpretations may be possible, especially when higher-quality data on activity patterns in more species become available.

It apears that mamals may have been chased by the saurischians throughout the day, night and twilight hours and that many adaptations and reversions may have occured over a period (possibly) much longer than the 66 million years previously thought. Research is ongoing.

Not the answer you're looking for? Browse other questions tagged evolution human-evolution sleep or ask your own question.

13
When did CRISPR/Cas9 evolve and what is the likelihood that a superior system for live cell genome editing has already evolved on earth since then?
21
How and why did mammals go back to the oceans?
24
How did the felines get to America?