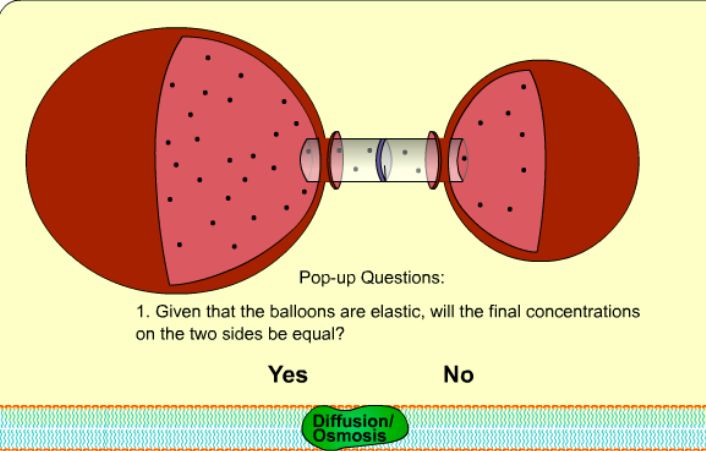 For the first picture: can someone please explain in simple terms (I started learning biology a few days ago), why the answer to this osmosis question is no? 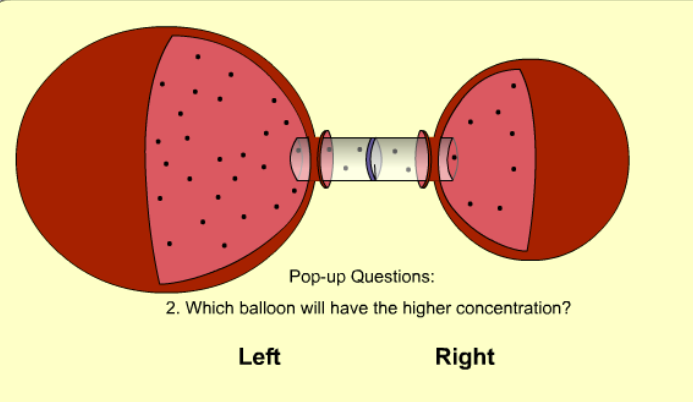 For the second picture: The answer is left because "the tension of the balloon can resist osmosis". Can someone explain what this means?

Yeah, basic principles of osmosis there, but let me see if I can make it clear. For illustration's sake, I'll take glucose as a solute and water as a solvent, but recall that the principles are true (though they can have added complexity) for other solutes and solvents (see this post on chem.SE).

The basic principle behind osmosis is that conjoined systems tend toward equal concentrations. In other words, if you have a more concentrated solution (more particles of glucose per amount of water) on one side of a membrane than the other, the solution "wants" to become equal on both sides of the membrane.

If the membrane is permeable, there's no problem: glucose can flow freely and equilibrate on both sides of the membrane. So the solution just moves around "mixing" until there's the same concentration everywhere of solutes (ie., glucose) in the solvent (ie., water).

Now look at Picture 1. Intuition from all this would tell you that the concentrations would be equal. However, there's a twist. Osmosis can only exert so much pressure on a system, and if it has to resist a pressure, it eventually stops, even if the concentrations are not equal.

Taking it to the next level

They're basically laying the foundation work for reverse osmosis in this question. In the case of reverse osmosis, we would be artificially applying pressure to the balloon on the left, resulting in water flowing forcibly into the right container. This can be an advantage if you want to increase the concentration of a liquid - which has hundreds of industrial usages, such as in concentrating maple syrup in Canada and the northern States.

4
What happens to the red blood cell in CaCl₂ solution?
2
Osmolarity vs. Tonicity
1
when does osmosis stop
3
Osmotic Pressure Clarification
0
Is osmosis diffusion of water?
0
Osmotic pressure and turgor pressure details