How much energy does a small spider expend per day just waiting for its web to vibrate?

One day I noticed a small spider in my home, sitting in its small web, and kept an eye on it. After several weeks of watching I hadn't seen it catch anything. I slightly perturbed the web and it reacted. It was still alive.

Question: I'm curious to know roughly how much energy a small spider needs to sit and wait. Might this be termed roughly the spiders Basal metabolic rate? It could be for any small spider that spends much of its time waiting for prey. As long as an approximate size or mass is available then it could be expressed as kcal/day/kg or some similar unit.

I have read about Kleiber's law in this answer, but I don't think it is meant to extend down to small spiders.

note: I'm just asking for the energy expended during resting periods. Of course during a day the spider may do web maintenance, catch or eat prey, but it's the resting rate of energy consumption, on a daily basis, that I'm asking about.

Background
Ballesteros et al. (2018) modeled basal metabolic rates of insects. They reckoned that endotherms, like insects, basically use energy directly correlated to the number of cells, which is linearly correlated to their body mass. They checked their model with experimental data from Chown et al. (2007) (Fig. 1).

Acknowledging that arachnids aren't insects, but that both are arthropods, let's take an average-sized web making spider, like the black widow, weighing in at 1 g. This yields a basal metabolic rate of 10 J/h, or 240 J/day. However, and given the linear correlation between energy expenditure and mass, a dwarf spider weighing in at 1 mg expends 1000 times less, and a Goliath bird eater approaching 200 g will expend 200 times more. 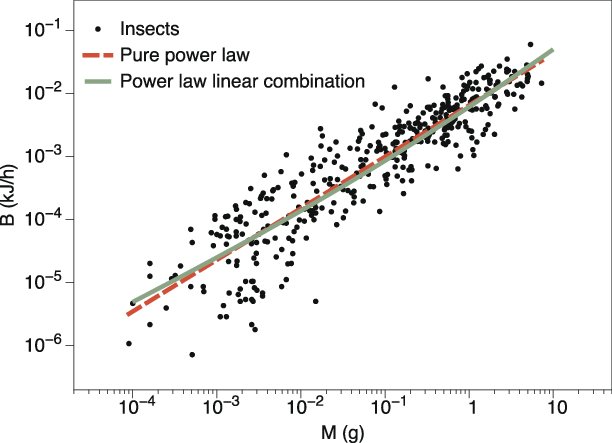 A 400 pound human can survive a year without food, and an arachnid can manage the same, 3000-7000 hours if it consumes it's body mass equivalent.

By measuring spider oxygen consumption, scientists have found a range of 21–356 μl O2/g per hr. Its good efficiency compared to other poikilotherms of same size.

A human an adult at rest consumes about 16 liters of oxygen per hour. This gives a nominal basal metabolic rate of 75 kcal/hr which translates to 87 watts(=1.2 milliwats per gram).

Big garden spiders from temperate regions are about 1g, so a big spider from the garden can use 0.1 - 2 milliwatts at 20'C.

Not the answer you're looking for? Browse other questions tagged entomology metabolism biophysics arachnology energy-metabolism or ask your own question.

3
How much solar energy required to produce enough food for a herbivore?

11
Why is funnel web spider venom so lethal to humans and not so much for other mammals?
3
How much solar energy required to produce enough food for a herbivore?