Why dogs move their noses when smelling?

I read on Wikipedia that:

The wet nose, or rhinarium, is essential for determining the direction of the air current containing the smell. Cold receptors in the skin are sensitive to the cooling of the skin by evaporation of the moisture by air currents.

That explains why their noses are wet. Why they're slightly moving them when smelling, like on this video (see the close-up in the second part)? Could this very little movement create enough air currents around the nose to determine what smells are coming from what directions? Or is there another reason?

The dog's ability to smell the world around him and to interpret these odors depends on a complicated chemical sensory system. First of all, it possesses mobile nostrils, that help to determine the direction of the smell. Then comes sniffing, the ability to disrupt the air with a regular pattern of breathing that, through laboratory testing, is structured in a series of 3 to 7 snorts. Most of the sensory organs of the dog's nose, the septal organ, are probably responsible for the outbreak of sniffing behavior.

The air is scented, it passes over a bony structure called "projection sub-ethmoid", that man does not possess, and nasal membranes that cover it. The area above the protrusion is not sweep, when the dog exhales air and it allows olfactory molecules to settle and accumulate.

When a dog breathes normally, air is introduced into the nasal passages, it continues its way to the lungs. The action of smell allows air to remain "at rest" in the nasal passages. The intricate complex surrounds the maxillo-turbinate bones of the skeleton provides that the nasal membranes are capable of creating models of air flows odors that lead content in the air to hit the regions of the olfactory receptors.

The odor molecules disintegrate and are concentrated in the nasal mucus that adheres to the receptor cells. Once the mucus, load odor, adheres to the microscopic hairs of receptor cells, the chemical signal odor turns into an electric signal and is sent to the cerebral cortex and the limbic system, ie, the part of the brain that regulate behaviors feeding, drinking and sex. Small molecules stimulate the olfactory nerve of smell. Big odor molecules stimulate the trigeminal nerve, one of the largest nerves of the skull, and the volatiles of sex hormones probably stimulate the vomeronasal organ, the other part of the anatomy of the dog that does not exist in primates. 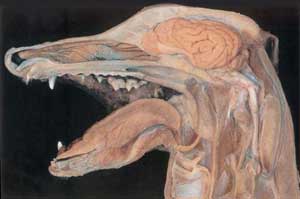 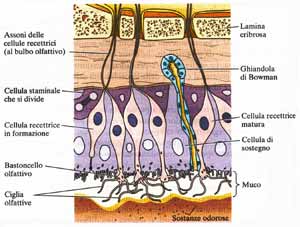 Their nostrils can move, like the eyes to focus and channel the light energy. Or the highly mobile ears of many predatory animals, including cats and owls, which can rotate, also independently one from the other, not only to improve the perception, but also to identify the direction of the sound.

The principle is the same as the frontal binocular vision, which allows us to calculate the distance.

When the dog sniffs, "taste" a smell with a series of inhalations shorter and faster than normal, as we do when we feel a bad smell, breathes quickly several times to understand what smell is that. Of course we are well-educated people and we do not do this in public. But the gesture is the same. =-]

"Smell is the ability to detect and discern the odorous emanations from the air. The snuff is the ability to intercept and discern the odorous emanations from the ground. They act with a pattern of regular breathing and is structured in a series of one / three smells accompanied by a series of three / seven snuffs. The behavior is controlled by the organs of sense of smell nasal septum." (Section 3.3.3.4.1 and the following)

The dog is able to absorb the chemicals present in the air, thanks to the characteristics enjoyed by its olfactory cells. To further stimulate their sense of smell to the dog no choice but to expand with some emphasis their nostrils sneaking in a strong "suction" of odors. The air will be retained more or less long and the dog will recognize odors also very weak.

The nose of the dog is also called truffle, at its end there are the nostrils or the cavity, through which sucks air, and the vibrissae, equipped with sensory hairs. The dog's nose is particularly sensitive, is equipped on the inside of an organ said "of Jacobson", which allows to perceive any kind of substance, able to distinguish between a million of specific molecules, over that of perceiving pheromones, i.e. substances that indicate important information about the physical and mental state of others like it.

Have you noticed how a dog sniffs the urine of a female "tasting it"? It is the same action that makes the viper when it follows the track of the mouse: it evertes the tongue and carries on it the odorous particles in the buccal cavity, and this organ has a function in the middle between the olfactory and gustatory ones. "Pointing dogs" is as pointing "the wild" taste the smell. "Eat the scent", in the jargon, because savored, not only in terms of smell, the smell of the wild. The Jacobson's organ is then a second organ capable of perceiving odors, the first we've said is represented ciliated epithelium of the mucous membrane of the nose. But there is a third organ called the "Rodolfo-Masera" which also serves to sense the emanations chemical (not yet known which), that way you could explain a specialization of these organs to perceive certain groups of biochemicals than others. - http://www.laciotola.net/Cani/la-funzione-olfattiva-del-cane.html

Animals smell in stereo. Just the way you need 2 ears to know the direction of sound, you need 2 nostrils to know the direction of odor source. Sniffing around helps in doing exactly that as you sample from different locations; there is inter-nostril concentration difference and inter-nostril timing difference of when the molecules hit the olfactory membrane.

12
Why can cats interpret things on a monitor/tv, but dogs cannot?
7
Why do we squint when tasting very sour things?
11
Dogs bark at familiar person in Santa costume. Why? Don't dogs trust smell over vision?
7
Why do I feel funny in my tummy when riding a virtual roller coaster?
3
Why are our bodies created to itch when histamine is released by our immune systems?
3
When something "smells moldy" what are we really smelling?