What chemicals and structures control the *direction* of plant growth in leaves, stems and roots?

If you want a specific plant, let's say the snap peas I am growing that I bought at Agway. I noticed that they grow towards the light source through the nearby window. Also I think roots work the same way for water/minerals. also don't various kinds of ants find food conceptually identically?

How much of this is true? Please correct:

The movement of plant shoot towards light is called phototropism. This process is mainly stimulated by the blue light. The photoreceptor involved is called Phot1 (Phototropin 1) or JK244.

Auxins such as IAA (indole acetic acid) are plant hormones, expressed highly in meristem, which cause shoot growth. On illumination this phototropin, through currently unknown messengers, causes inhibition of polar Auxin transport in the illuminated side. This causes the non-illuminated side to grow more and thus bending the plant towards light. 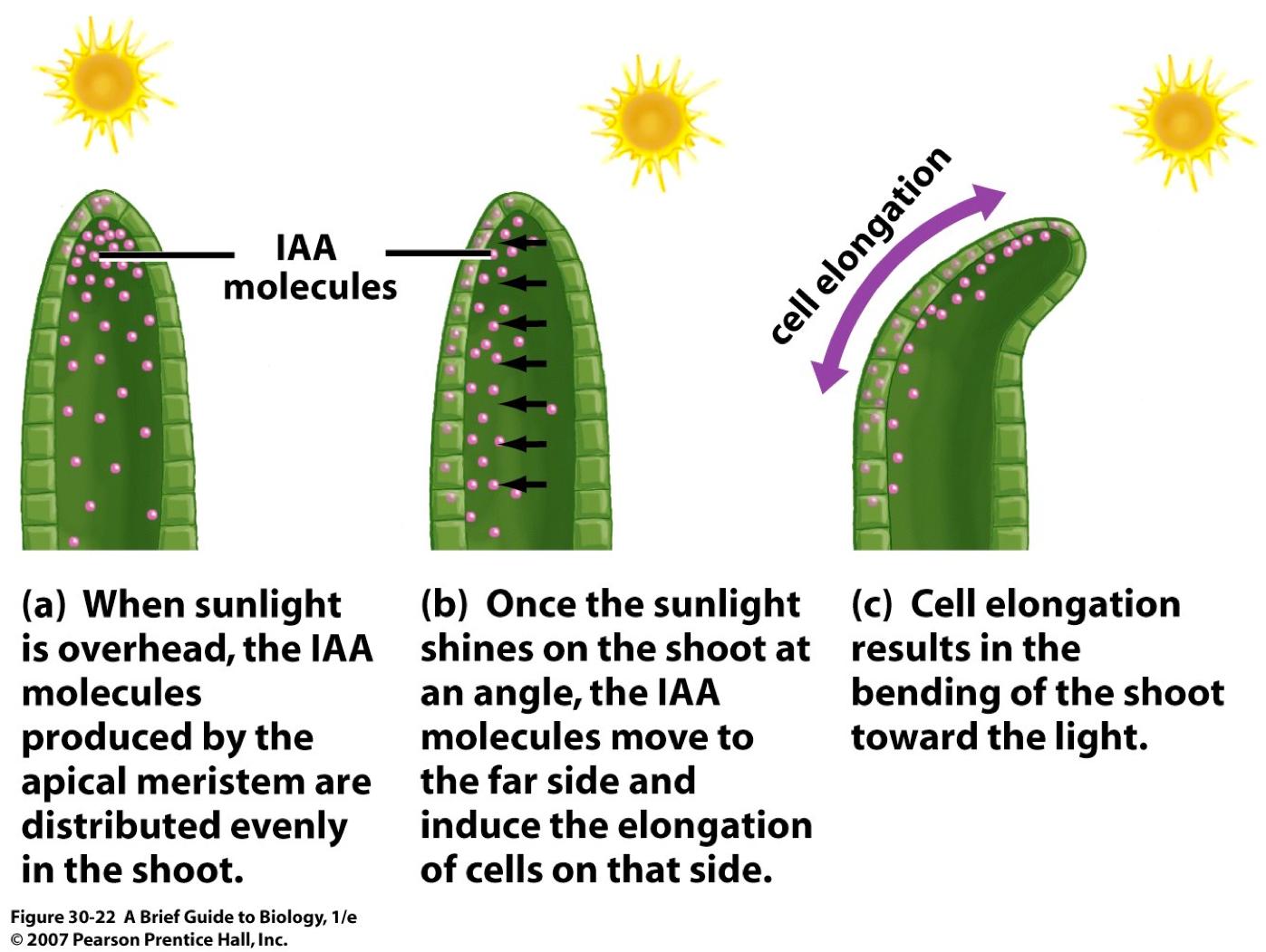 The image represents an older model which proposed lateral movement of auxin. The mechanism mentioned in last paragraph is the currently accepted model. The below figure illustrates 'polar auxin transport'

For details refer to this nice review on phototropism.

Ethylene and Auxin signaling is involved in root growth both in geotropism and hydrotropism. In geotropism the auxin is stimulated by statoliths (clustered and membrane bound grains of starch) in the amyloplasts- the organelles which store starch. The model suggests that amyloplst sediments under the influence of gravity and thereby affect auxin polar transport (the second figure co-incidentally illustrates polar auxin transport in geotropism).

The exact moisture sensor is unknown but Abscissic acid (ABA), which is well known for its involvement in drought tolerance, is known to affect hydrotropism.

MIZ1/2 are some proteins uniquely involved in hyrdotropism.

Both pathways are dependent on Calcium as a secondary messenger. To conclude, these pathways are not as clear as those of phototropism.

Your statement is partially correct, but not entirely. 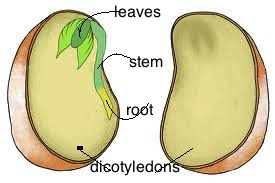 As an animal embryo, the seed, still closed, is already formed, with the distinction between root, stem and leaves. Tiny but already there are.

All the rest of the seed (in this case two cotyledons) is a kind of food dough, and serves as a food reserve for the seedling, until the time of rooting and the achievement of energy independence.

As animals, the plant seeks, first of all, water. The first need of water is determined by the need to break the skin that closes the seed. If there is no presence of water, the seed dried and does not sprout.

If it "feel" the water, the seed drinks, swells and the skin breaks down. At this stage we can also say that the seed is aware of where it can find water. I do not think that they have been studies done on the awareness of the high and low (orientation). On the edge of rivers and lakes the seed can also find favorable ground above itself.

The direction of the water determines an effort, which can also lead to the rotation of the seed in the right position to emit the radicle towards the water (and the earth). In this time the embryo "eats" the nutritional reserves contained in the seed.

Then precisely they decide which direction to go in. When the place and position are correct, the seed has open and the part to eat is almost eaten, then more light. The radicle grows to first, both in size and as the length. It hooks to the soil and establishes a firm basis. Starts to drink directly (and not by absorption of the tissues of the seed) and starts to push out the seedling, typically in the opposite direction.

The seedling "feel" the light energy and go to that.

If the plants have ability of decision or not, has not yet been established. But to me personally it seems that a functional DNA must be able to allow each subjet to handle each situation (consistent with its structure) in the best way to itself.

This seems to have been ascertained for the animals. A certain capacity of thought, namely to make decisions, is absolutely functional in a huge energy saving on the need for encoding and on the structure of DNA

I know little about the life of the colonies of ants. But I know all about bees. A swarm that is detached from the hive to found a new colony, it also stops two or three times. Sends forward scouts, followed by architects and, if the place is right, the architects have a network, and bees wax begin to build.

Your mention of the ants is not sufficient to me to find similarities.

Not the answer you're looking for? Browse other questions tagged plant-physiology plant-anatomy or ask your own question.

2
What mechanism is responsible for germinating in the right direction (root towards gravity)?

20
How does a plant grow before photosynthesis is possible?
32
How do trees manage to grow equally in all directions?
23
What determines the spiral direction of plants?
10
How does a garlic clove thrive inside a closed refrigerator?
8
Why do bananas grow curved?
5
What is the theoretical maximum height of a herbaceous plant stem?
11
Can you accelerate the growth of a plant by accelerating its surroundings?
0
Do plants experience the following feelings